(We welcome Richard Street-Jammer with the following guest opinion.  I will be sorely disappointed if we don’t see comments about this.)

Capital One’s youtube account posted the video above on December 27th 2012. If you’re reading this and can’t watch the video, it stars Dragonforce’s guitarists. They trade off leads as each one uses the Capital One mobile banking app on his cell phone. The narrator tells us that the app “lets us bank wherever, so you can keep doing what you are doing,” and then the guitars shoot huge bolts of lightning in space, because HUGE BOLTS OF LIGHTNING IN SPACE. If they’re not playing an actual Dragonforce song, I can’t tell; it sounds like a Dragonforce song, and Dragonforce has only written one song.

As metal band -> commercial appearances go, this one’s a pretty naked grab for cash. To my knowledge, the band has never taken a philosophical stance against hawking products other than musical equipment. (e.g., guitar and guitar amp sponsorships). Dragonforce is a professional band that falls on the fun and entertainment side of the artistic spectrum. They’re entertainers, and their music is a product.

I don’t know their band’s income, but I doubt they bank the kind of lucre we associate with being a rockstar. Given the downward trend in music sales, some extra money from doing a commercial spot can’t hurt. Relatively few bands are able to monetize their music in this fashion. Of those bands, even fewer still play heavy metal. It has happened before though. Suffocation did it a few years ago when they appeared in a History Channel television commercial. Based partially on a fan’s request, Falconer did a TV ad for Mini automobiles. While it does happen, it’s still a shock to see a metal band in a commercial. 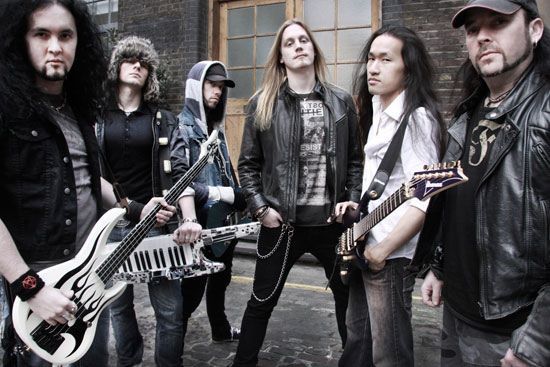 Curiously, Dragonforce isn’t mentioned by name in the ad at all. Perhaps it’s not meant to be a television ad; the Capital One account lists it as “Mobile Banking with Dragonforce.” At least it’s an accurate ad, though. Guitar shredding and huge lightning bolts in space…that’s Dragonforce.

It flies in the face of traditional heavy metal ethics, but it’s good business, it’s free publicity, and there’s no hypocrisy involved. When Scion AV started throwing heavy metal concerts and releasing free EPs, many eyebrows were raised. I wasn’t bothered by Scion AV, and I’m still not. Before the advent of recording technology, musicians lived on touring income. Some of them were paid by, or really sponsored by, wealthy patrons to write songs. In some ways, the sources from which musicians earn their living are reverting back to those of the age before recording technology. It’s only fitting then that wealthy companies like Scion AV are now acting as patrons.

Traditionally, a metal, punk, or hardcore band doing a commercial like this would be considered selling out. It might be time to rethink that approach. The commercial will help keep Dragonforce on the road, give them more time for practicing shredding and rewriting their song, and give them more time to train at shooting huge lightning bolts. It’ll help them continue functioning as a professional band instead of being distracted by fulltime jobs. Maybe it’s a harbinger of things to come. I know where I stand on this: Dragonforce hasn’t sold out. They’ve picked up a new patron. What say you?

17 Responses to “BANKING WITH DRAGONFORCE”