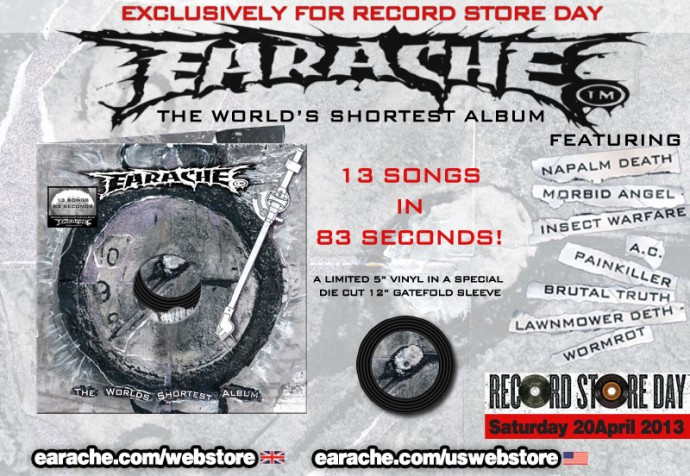 I had time this morning to snoop around the web and my e-mail inbox in search of interesting new music and new videos. Unfortunately, at the moment my fucking day job isn’t allowing me enough time to listen to everything I found, much less write about it.

I thought to myself, wouldn’t it be great if I could find a whole album’s worth of songs I could listen to in about 82.8 seconds, with a video to go along with it?

And wow, what an amazing coincidence! Just as those thoughts crossed my mind I found a whole album of music lasting only 82.8 seconds (including the spaces between songs) AND a video to go with it! Yeah, it happened just like that.

How do you get 13 songs on an 82.8 second album? You fuckin’ griiiiiind, that’s how. Here’s the track list (plus run times for each song) for what Earache Records is billing as “The World’s Shortest Album”:

Maybe you would like to hear the whole album? That can be arranged. All you have to do is watch the following video, which will take 3:16 of your time and which I like a bunch.

Why do I like it? Two reasons: because it’s so solemn and methodical, in stark contrast to the music; and because more time is spent carefully unpacking, displaying, and positioning the album on the turntable than it takes to hear all the songs.

Earache made this comp for Record Store Day, which is taking place on April 20, 2013. On that day, various labels and artists are arranging to sell special vinyl and CD releases in independent record stores exclusively for that day in the U.S. and UK. For more info and to see which stores are participating in Record Store Day, check out these links: