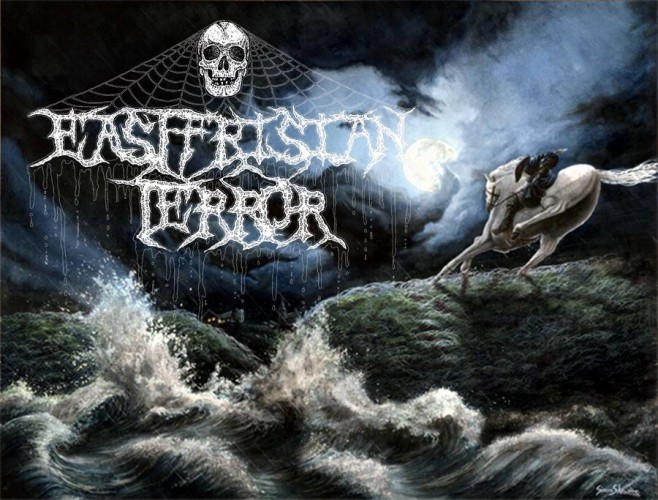 There’s so much to like about Eastfrisian Terror’s debut EP, Lever dood as Slav, that I decided to make a list of the good things:

6.  The surprising transition to guitar melody at 1:55 of “Lever dood as Slav”

7.  The next transition in the same song at 2:12, beginning with a vomit-spewing howl

8.  Speaking of vomitaciousness (is that a word?), vocals sounding like a duet between LG Petrov (while being boiled alive) and John McEntee (while on quaaludes)

With respect to the titles of two of the three songs on the EP, I found this at The Font of All Human Knowledge:

Eala Frya Fresena is the motto for the coat of arms of East Frisia in northern Germany. The motto is often mistranslated as “Hail, free Frisians!”, but it was the reversal of the feudal prostration and is better translated as “Stand up, free Frisians!”. According to 16th century sources, it was spoken at the Upstalsboom in Aurich where Frisian judges meet on Pentecost and it is traditionally answered with Lever dood as Slaav, or in English, rather dead than slaves.”

I love this little EP. It pushes many buttons within my scrambled brain.

Thanks to Azmodes at Encyclopaedia Metallum for featuring this band on the Metal-Archives Facebook page, which is how I discovered the music. It seemed fitting to include a review of the EP on our site today since we’ve also just published an extensive interview with Azmodes (here).

Eastfrisian Terror can be found on Facebook via this link. I found an internet link for download of the EP, but I’m not positive it’s official and authorized. I will try to find out and will add the link if it is (at the moment, I know of no other way to get the EP). Here’s a stream of the full EP.

UPDATE!  We have been in contact with the band, and here is information about how to get the EP for yourselves: