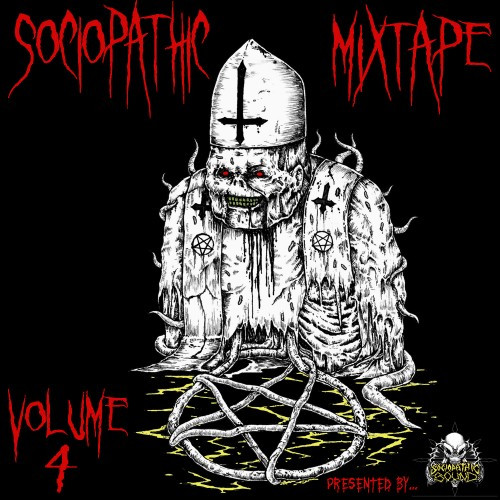 Sociopathic Sound started as a Philadelphia-based web project in June 2012, but it’s about to transition into a record label, with plans not only to sign bands for new releases but also to re-issue previous works on vinyl or as digitally remastered releases. Since opening the doors last year, Sociopathic Sound has also been compiling free mixtapes (with permission of the bands and labels whose songs have gone into the comps). As of today, the latest comp — Vol. 4 — has gone up on Bandcamp for streaming and download, and man, it’s a whopper.

The latest comp consists of 100 tracks by bands from all over the world — and all over the genre map of extreme music. In looking through the list, I recognize these bands with whom I’m at least somewhat familiar and whose music I already know I like (and we’ve written about many of these here at NCS):

But of course one of the attractions of comps like this one is the chance to discover new bands — and there are a ton of them on this thing. My mind boggles at the effort it must have taken to assemble it. My mind is even more boggled by the news that Sociopathic Sound is already on the verge of releasing Volume 5!

Yes, it appears that Sociopathic Sound will be releasing a Vol. 5 mixtape later this same month. I’ll try to remember to spread the news about that as well. Given the talent included on Vol. 4, I’m quite interested in seeing what comes next.

The only beef I could see someone having with the Vol. 4 mixtape is that the tracks aren’t available for download on a song-by-song basis; you have to download the whole album. Of course, you could do that and then only keep what you like, but at least initially it’s a big investment in hard drive space. On the other hand, one purpose of comps such as this is to expose fans to new music by bands they might not otherwise discover.

But this is a minor beef, and is far overshadowed by the effort it took to put this together and by the quality of what’s included — just based on the music I already know, not to mention what other gems may be lurking in here for discovery.

Here’s the link to the Bandcamp page for the current volume:

And here’s the music stream: