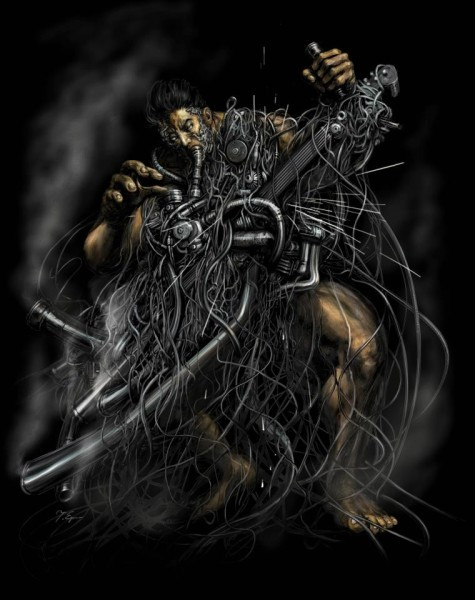 The first piece, above, is by Japanese master Toshihiro Egawa. It’s something he did for a Russian band I’m pretty high on, 7 H.Target. They’ve now finished a second album, Psy Slam Damage, which is coming out May 16 via Coyote Records. But Egawa’s artwork isn’t for that album. It’s an illustration for the next album . . . 0.00 Apocalypse . . . which will feature vocals by Mirus (ex-Katalepsy) and will be released by Sevared Records sometime later this year. Mark Cooper has also created artwork for the album, and this post will include something by him, too.

Last month I featured one track from Psy Slam Damage, and now another one has surfaced. It’s called “Tetsuo Rising”. Check it out: 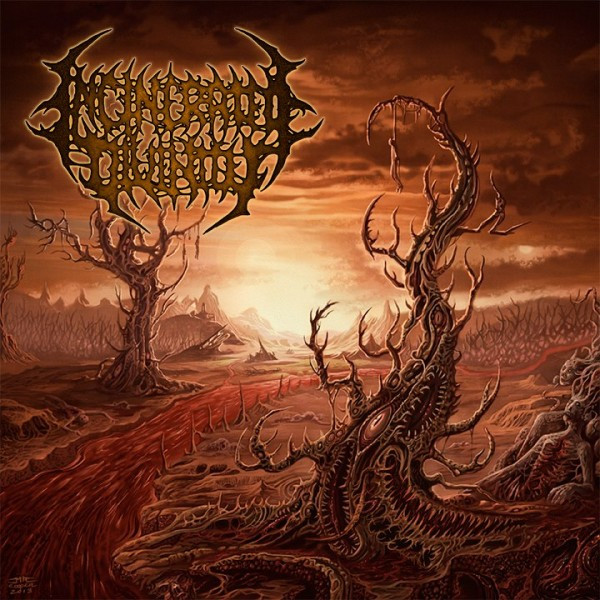 I’m not sure how the band plan to distribute the new EP, but all 6 tracks from it are available for streaming on Soundcloud. Here they are:

Let’s stay with Mark Cooper for one more piece. This is a cover he recently unveiled for a Utah band named The Obliterate Plague (whose FB page is here) and their new album The Wrath of Cthulhu. 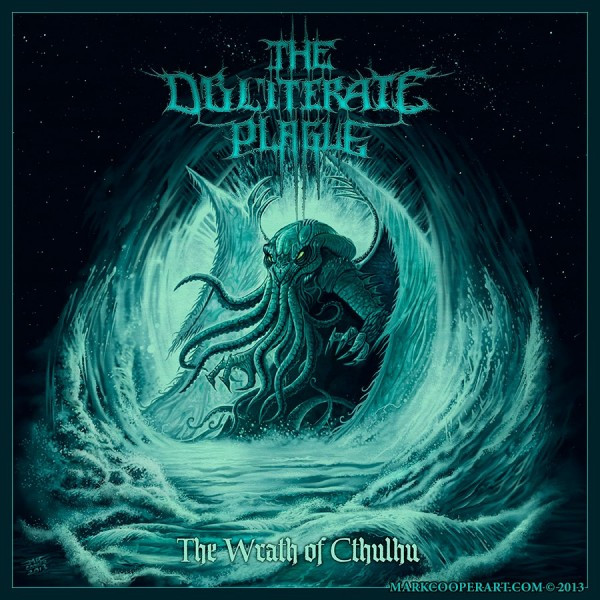 Killer cover. Of course, I’m a sucker for just about anything that involves Cthulhu, but this is really well done.

The album is due in June. I haven’t yet found any music from it, though this is a death metal band, and so it will likely be . . . death metal.

Now let’s turn to Ken Sarafin. He’s another artist whose work I follow. He’s also the vocalist for Vale of Pnath, who we’ve written about more than once over the years (but most recently here). The latest piece of his that I saw yesterday is the striking cover for a debut album by a St. Louis symphonic black/death metal band named Eternium, which is entitled Repelling A Solar Giant: 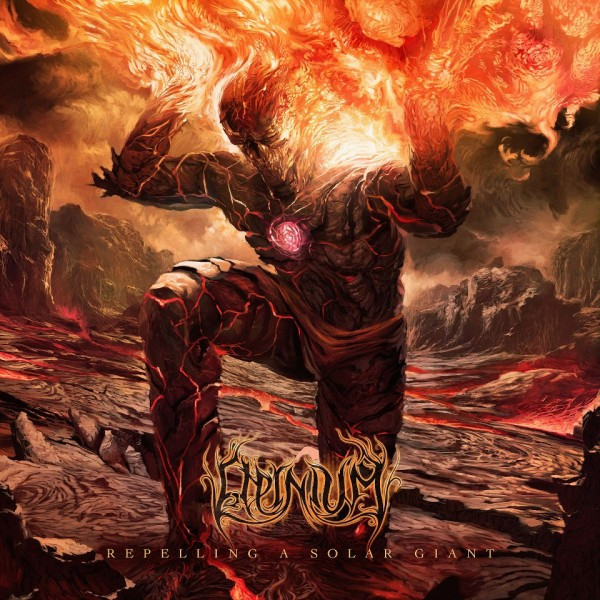 I haven’t seen a release date for this album yet, but on Monday of this week Eternium released the first track from the album, “Aura Infernum: The Flight Over Massless Soul”, and this is it (they’ve also got a demo that they’ve made available for free download here):

Bloodboy is a Germany-based artist whose work I don’t think we’ve displayed here at NCS before, but I’ve been following his FB page for a while and like his style. Below is something he unveiled recently, which is available for sale as a t-shirt design: 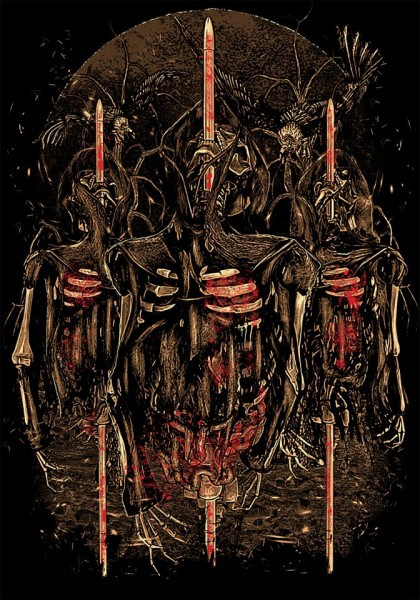 Very cool. And here’s another sick shirt design that’s also for sale (at least as of yesterday): 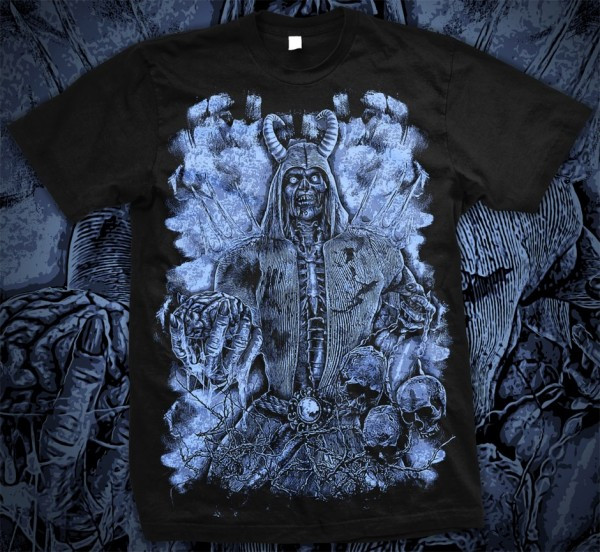 And our next item is the amazing cover of a forthcoming 7″ EP, Nightmare Flesh Offering, by the Oregon/Illinois duo known as Ævangelist; the artist is a Ukrainian dude who uses the tag Seeming Watcher: 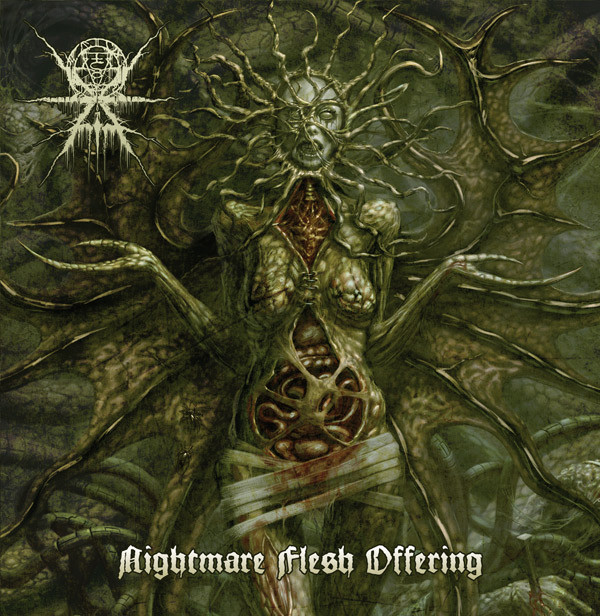 I really like the creations I’ve seen from Seeming Watcher, and this one is especially good.

I also really love  Ævangelist’s music. Their 2012 debut album via the I, Voidhanger label, De Masticatione Mortuorum in Tumulis, was a goddamn killer. I included one of its tracks on our list of 2012’s Most Infectious Extreme Metal Songs. Ævangelist are now signed to the Debemur Morti label, but this new two-song 7″ will be released by I, Voidhanger in a vinyl edition limited to 250 copies. It should be out in late June/early July 2013. The two songs are brand new and will be exclusive to this release.

I haven’t had the chance to hear those new tracks yet, but I did discover that Ævangelist have begun streaming a song called “Helix Covenant” that I haven’t heard before. It will appear as a bonus track on the vinyl version of De Masticatione Mortuorum in Tumulis, which is going to be released by Blood Harvest.

The next item that caught my eye is the cover art for The Fleshland, the new album by Japan’s Coffins — a crushing doom-death band who you need to know if you don’t already. I haven’t yet found out the name of the artist, though I have a guess about who it is. I’ll add the name here through an update once I’m definite about it. [UPDATE: the artist is Chris Moyen] 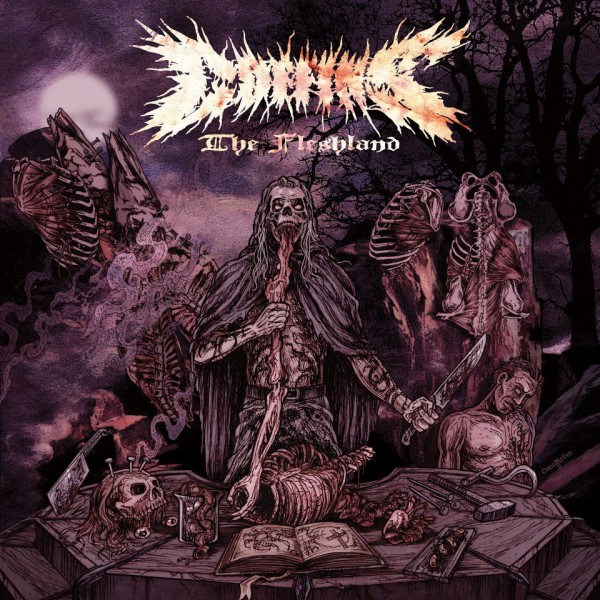 The new album will be released by Relapse on July 9 in North America (a bit earlier elsewhere) and is up for pre-order here or via Bandcamp at this location. This is a trailer for the album that started streaming last week:

Okay, to wrap up this post, let’s have a look at the artwork by veteran metal artist Joe Petagno for Underworlds, the next album by Austin’s Mammoth Grinder: 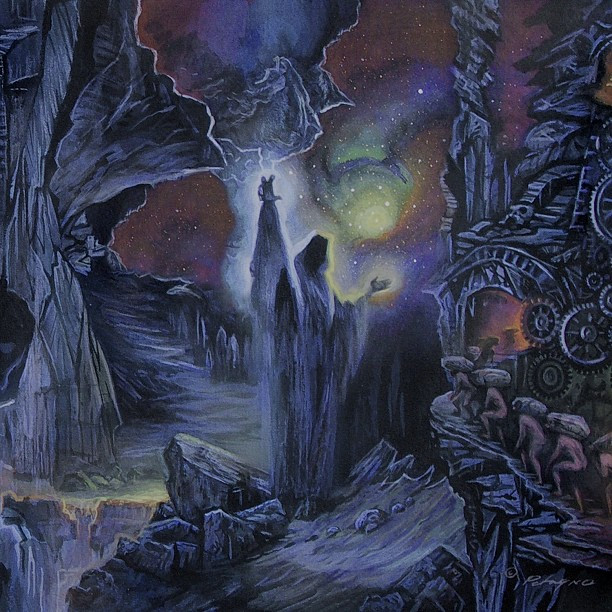 I’m a fan of Mammoth Grinder and very eager to hear this new album, which is their first in nearly four years. It will be released on CD and vinyl by 20 Buck Spin.

Okay, brothers and sisters, that’s all I’ve got for this post. Hope you liked what you saw and heard in here — but either way, comments with your reactions will be welcome.