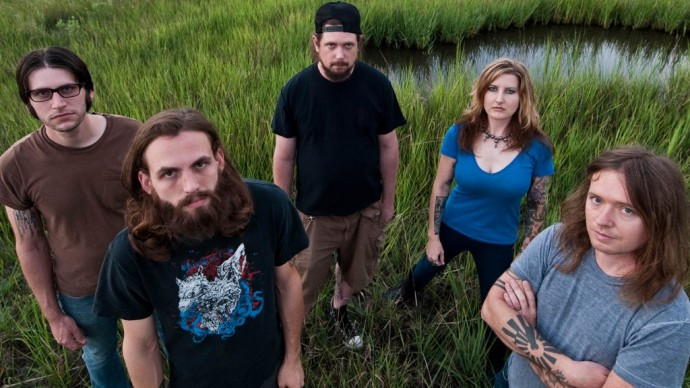 We’ve mentioned The Violitionist Sessions twice before, but you may have forgotten. In the words of the site’s proprietors: “The Violitionist Sessions are 3 questions and 3 songs with bands from Denton and passing through Denton, Texas. The sessions are all recorded live in a living room with no overdubs and no fancy tricks. The goal is to document a moment in time. This is what happened in Denton, Texas.”

Yesterday, The Violitionist Sessions put up videos of the three songs recently performed in that living room by Savannah’s Kylesa. They also made the live recordings available for free download on Bandcamp. And they also included an interview of the band. The three songs are “To Forget” (Spiral Shadow), “Said and Done” (Static Tensions), and “Hollow Severer” (Time Will Fuse Its Worth). All of that is collected here, though I’m also going to embed the videos after the jump.

As has been true of every recording I’ve heard from The Violitionist Sessions, the sound quality is outstanding, and Kylesa were really hitting it hard in these sessions — tight, tough, trippy, and plenty heavy. I’m not well-versed in Kylesa’s music — hadn’t heard any of these songs before — and it was an eye-opener for me. “To Forget”, in particular, made a big impression when I watched and listened to these videos.

Kylesa have a new album, Ultraviolet, out now on Season of Mist. It’s now on my list of albums to hear. The band’s Facebook page is here. Hope you dig this as much as I did.

And yeah, I know, there’s clean singing. That’s why this post is tagged “Exceptions to the Rule”.

4 Responses to “KYLESA: THE VIOLITIONIST SESSIONS”