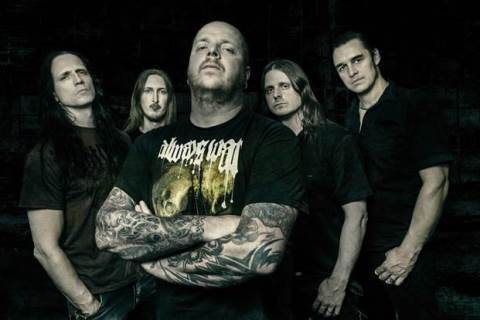 Sweden’s The Haunted have been quiet for a while, and I had my doubts about whether the band would ever return to form after losing three members last year, and after what I considered a downturn in the quality of their output even before then. As an enthusiastic fan of the band’s earlier albums, this was a depressing state of affairs. But recently The Haunted have been hinting at a revival, with a new line-up, and today the new line-up was announced. Damnation, it’s a strong return!

As described in a just-released video on YouTube, founding member Peter Jensen succeeded in convincing two former members of the band to come back — vocalist Marco Aro (The Resistance, Face Down), who was with the band for The Haunted Made Me Do It, Live Rounds In Tokyo, and One Kill Wonder, and drummer extraordinaire Adrian Erlandsson (At the Gates, Paradise Lost), who was one of the band’s original members at the time of their self-titled debut in 1998.

But that’s not all. Guitar wizard Ola Englund (Feared, Six Feet Under) has also joined the line-up, and that’s another very strong addition.

There will undoubtedly be fans who will pine for the departed frontman Peter Dolving, but I for one am pretty damned excited about this revamped line-up. And not only because of the names now involved in the project: the video includes snippets of music from the new line-up’s rehearsal, and it sounds kickass. Watch it and listen after the jump.