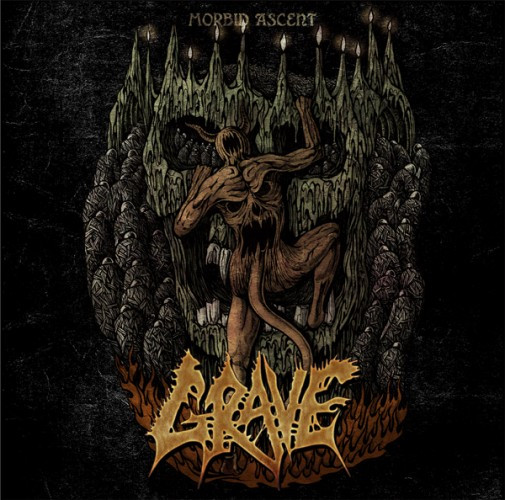 In mid-July we reported details about the new EP (Morbid Ascent) from Sweden’s Grave that had just then surfaced today. We had the release date (August 26 in Europe, September 17 in North America), we had the tasty cover art by Costin Chioreanu (above), we knew that Autopsy’s Eric Cutler was going to be contributing as a guest to two of the new songs, we knew that the EP would also include a cover of Satyricon’s “Possessed” as well as a remixed version of “Epos” from Risen From the Tomb and a track from Grave’s 1989 Sexual Mutilation demo (“Reality of Life”). What we didn’t have was actual music to hear. But now we do!

Yesterday Stereogum premiered a song from the EP named “Venial Sin”. This is one of those two tracks that includes Eric Cutler’s contributions as a guitar soloist. I find myself in complete agreement with what Aaron Lariviere wrote in his introduction to the song for Stereogum (and I would like to thank him for linking to a piece I wrote about The Ola Lindgren Diet, the comments to which made me laugh all over again when I read them yesterday, after I also laughed at what I wrote):

“Grave may as well be eternal at this point. 29 years into a career playing Swedish fucking death metal, they’re either undead or just unkillable, showing no signs of diminishing in terms of power or perseverance. One of the originals of the Swedish metal scene alongside Entombed, Dismember, and Unleashed, what makes Grave remarkable in 2013 is that they still release vital, vitriolic shit with unnatural frequency. Last year’s full-length Endless Procession Of Souls was more than a return to form — it’s actually one of my favorite death metal albums ever, right alongside the band’s debut, Into The Grave, released some 20 years earlier. Bands this old should not be this good — it’s a wondrous thing when they are.

“’Venial Sin,’ the first track off Grave’s latest EP, Morbid Ascent, gives us Grave at their best: primitive, pounding death charges headfirst into doom territory, slowing to a crawl while the riffs keep on ripping. Meanwhile singer/guitarist/testament-to-unclean-living Ola Lindgren proves he can out-bellow just about everyone as he spits out some especially scathing (and discomfiting) lines about priests and their less-than-holy proclivities.”

Listen to the new song below — it’s fuckin’ brilliant. You can pre-order the EP on vinyl here; it will also be released digitally.