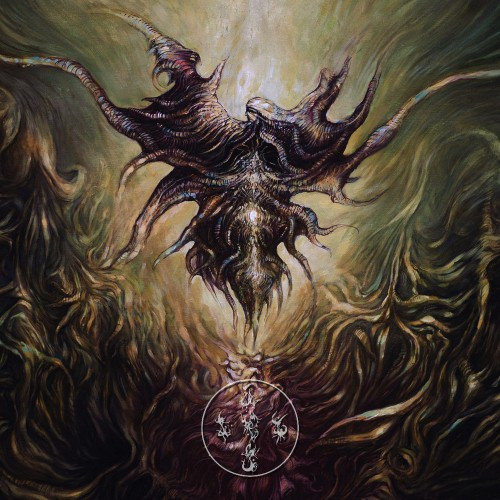 This song takes no prisoners. It shoots the wounded in the head and then rips the corpses into small pieces before consuming them. It delivers an atmosphere of alien horror, and the corrosive distortion can’t disguise the experimental-sounding nature of the riffing and drum progressions, which make the song interesting as well as frightening. As icing on this maggot-ridden cake, death/doom descends at the finale.

I really can’t wait for this album. It can be pre-ordered here. 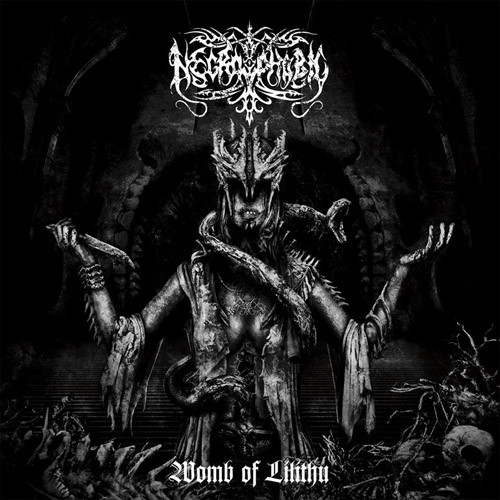 As previously reported, this influential Swedish band’s seventh studio album (and their first in four years), Womb of Lilithu, will be released by Season of Mist on October 29 in North America and October 25 everywhere else. We previously featured the album’s first two advance tracks, “Splendour Nigri Solis” and “Furfur” (here), and today brings us a third one: “Asmodee”. It comes via that well-known wormhole into black metal savagery, Revolver magazine.

“Asmodee” is a dynamic, jet-fueled flurry of intricate guitar and bass work, serpentine melody, and truly venomous vocals. Three songs in, and this album has clear earmarks of being one of the year’s standout releases.

Womb of Lilithu is available for pre-order here and you can find out more information about Necrophobic on their Facebook page. To listen to the song, jump to Revolver. 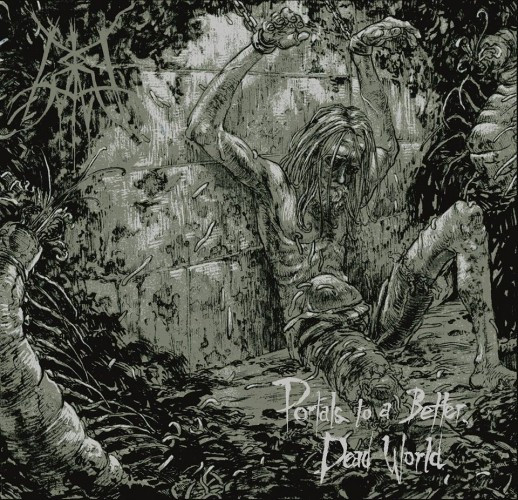 This Dallas-based band have released two previous albums plus an EP and an assortment of splits. Their latest full-length, entitled Portals to a Better, Dead World, is due on October 31 via Broken Limbs and Halo of Flies. One song from the album (“Closing Doors”) debuted at that well-known gateway to extreme music, NPR, and yesterday a second one (“Dust Collector”) debuted at that other well-known portal to extreme music. Pitchfork. Neither song can be embedded here, because our door is closed and we are collecting dust.

However, our voices will not be silenced and so we will be heard about those two songs. At first blush, with the clear ringing guitars in the intro, “Dust Collector” may not seem savage. But then vein-bursting vocals unleash a stream of caustic shrieks and roars, and the drums erupt in a frenzy. Those ringing guitars never go completely away, but that’s part of what makes the song so interesting (along with a lot more of that off-the-hook drumming). “Closing Doors” rips right from the beginning, displaying more of the band’s blackened sheen along with a blazing flurry of guitar and bass acrobatics. I’m really liking both songs and looking forward to hearing more. 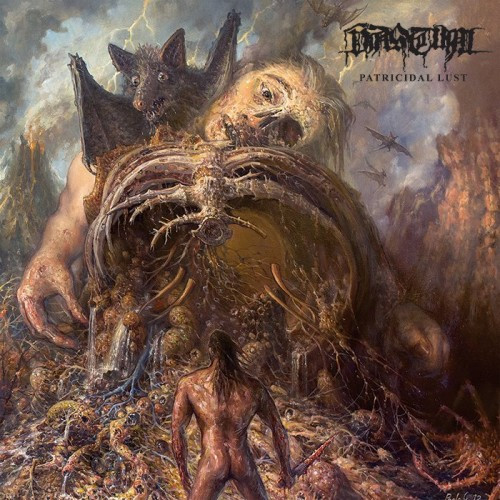 Vastum are a Bay Area band who began under the name Corpus as a side project of vocalist Dan Butler and guitarist Kyle House from the amazing Acephalix, whose titanic 2012 album Deathless Master I reviewed here. They were eventually joined by guitarist Leila Abdul-Rauf (Hammers of Misfortune, ex-Saros), bass-player Luca Indrio from Acephalix, and drummer Adam Perry. Their six-song debut, Carnal Law, which was originally released as a demo, made quite the splash in 2011, delivering a filthy, crusty, punk-influenced take on death metal.

Way back in September 2012 I happened to see a new painting by the uber-talented Paolo Girardi, along with the notation that it would appear on the cover of a Vastum album named Patricidal Lust. Finally, more than a year later, Patricidal Lust is almost upon us (go here to see the complete “gatefold” artwork by Girardi — what you see above will appear on the CD cover). It’s going to be released by 20 Buck Spin on November 12, and an advance track appeared today at . . . Pitchfork (again).

“3 AM In Agony” is a mid-tempo death metal stomp with riffs that alternately hammer and stab like a rusty blade. Oozing with smoggy atmosphere, loaded with delicious vocal ugliness, and lit up by screaming guitar solos, it’s a very promising teaser for this new album.

Once again, you will have to venture to Pitchfrok to hear the song: