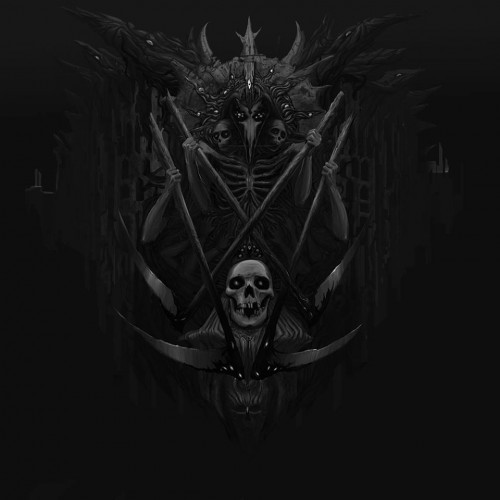 This is a review of a forthcoming 7″ EP by Vancouver’s Auroch, but it happens to coincide with a piece of significant news announced yesterday, so we’ll start with that: After making a particularly striking impression with their 2012 album From Forgotten Worlds, Auroch have now signed with Profound Lore, who will be releasing the band’s next album during 2014. Recording is expected to begin in February. Congratulations are in order, both for the band and for the label. That album goes on our highly anticipated list for the new year.

Now, back to the new EP. The name is Seven Veils and it includes two songs — the title track and a b-side called “Coronation”, which is a re-titled and re-recorded version of a much earlier demo track.

“Seven Veils” is a rip-roaring, no-holds-barred onslaught of blackened death metal, with meat-tenderizing drum blasts and a maelstrom of ravaging guitar and bass distortion. The blast-furnace effect of the music is regularly punctuated by brief moments of separation, sometimes no longer than one big twang of a bass string or a few morbid arpeggio notes. The music finds its groove here and there, but its mainly a fascinating over-the-top frenzy. The vocals are also completely unhinged, ranging from boiling-in-oil shrieking to the rapid-fire barking of what sounds like a really big mastiff. When you listen, your first impulse may be to duck and cover.

And, based on a few stills like this one, it appears there’s a “Seven Veils” video coming: 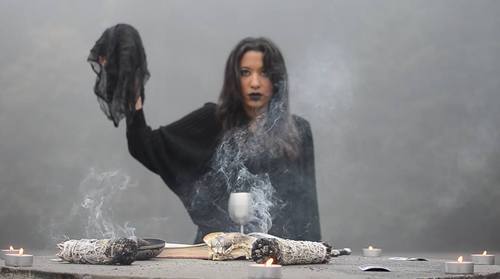 “Coronation”, on the other hand, is stuffed with big grooves that the band start hammering almost immediately, but this high-energy song also vibrates like a hive of angry hornets. There’s a lot of fleet-fingered dueling fretwork in this decimating track to accompany the skull-splitting rhythms, as well as another extremely animated (and extremely grotesque) guttural vocal performance. Without dialing back the viciousness one bit, “Coronation” gives Auroch the chance to display their abundant technical chops in a kind of well-channeled chaos.

Seven Veils is a galvanizing reminder of Auroch’s multi-faceted talents and a delectable appetizer for the next album to come, but it’s also very much worth having in its own right.

Seven Veils will be out soon through Graceless Recordings. Watch this space for ordering details. From Forgotten Worlds can be heard and acquired via the Bandcamp link below, and after that, please listen to “Seven Veils”.