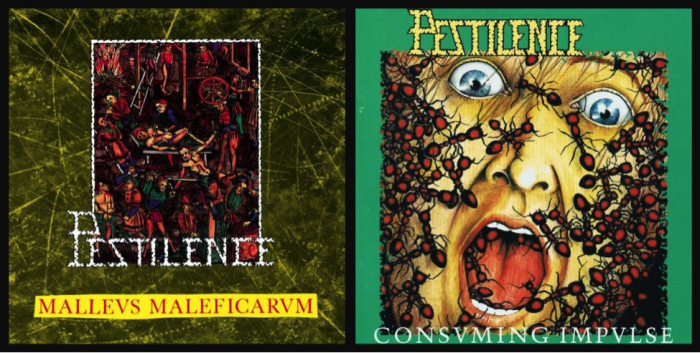 (In this post TheMadIsraeli continues his retrospective assessment of the discography produced by the seminal death metal band Pestilence, whose new album Obsideo was released recently. The first part of this series can be found here.)

Fucking finally I can fucking get back to this fucking shit and fucking write about fucking metal and shit. I must finish this Higher Criticism series and review Obsideo before the year is over or else my lungs will claw their way out of my ass (you can thank Michael Swaim of Cracked for that one) from the feeling of abject failure.

I both love and hate these two records. They stand as a testament to the pinnacle of how thrashy death metal can and SHOULD be done. In a way, I think Pestilence can be considered the most influential factor in the birth of the so called deathrash style. I mean, there were other bands sure, but not many who weaved the two styles together this seamlessly at the time. Maybe Devastation, and maybe early Death, but those are about the only other examples that occur to me.

This is also where it will become immediately apparent that Pestilence never stand still. These guys have never written the same record twice, have always experimented with their sound in interesting and occasionally alienating ways, and have produced consistently stellar music every time despite what the tr00 kvlt basement dweller nerds might think. I really mean no offense if you’re one of the people who thinks that these two albums are the total sum of Pestilence’s career, but I do feel you’re missing out.

Those aforementioned people are also the reason these albums bug me. Trying to crown a best or superior Pestilence album is absurd and silly because the band obviously have never looked at things that way. They would have stuck with a more consistent sound if that were the case. Mameli, as a musician, has always had my respect for how he’s treated their body of work. 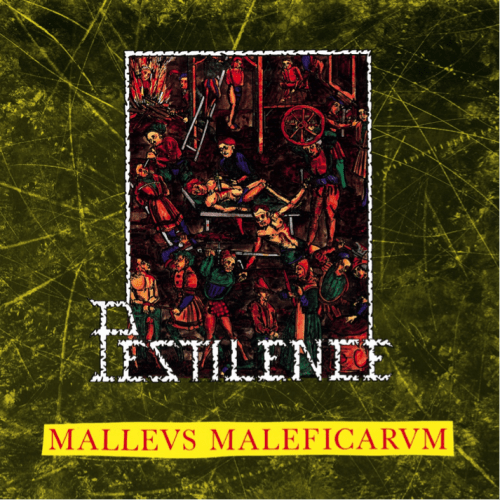 Malleus Maleficarum is no doubt a beastly record. It comes at you with fangs drenched in rabies foam and spreads its disease upon whoever it gashes. This is also definitely the least death metal of Pestilence’s discography. I’m not sure if it’s because they wanted to be lobbed in with the thrash scene (which I believe was more popular than death metal at the time) or if they simply wanted to rebuild and start over. This sounds nothing like their demo work, utilizing a higher tuning, guitar-wise (standard actually) and a cleaner vocal style while amping up the technical edge to 11.

I’m not sure how people who heard the demos reacted to this, but this album is definitely one of the crowning definitions of deathrash. There are some signature Pestilence elements that make their first appearances here: the band’s penchant for an overly metallic guitar tone, their odd sense of atonality and dissonance, their use of melody of any kind as a reprieve from the chaos, riffs that were technical and more about producing an alien aura than beating your face in. The album still manages to be brutal, but it’s brutal in a throat being slit open to gush a fountain of blood sense more than beating someone’s head in with a hammer.

Interestingly, Pestilence both displayed an ability to adapt and even conform to their surroundings and STILL produced an incredibly visceral album that was true to themselves. That’s probably what sticks out the most about this album, and why I love it. Pestilence have a tendency toward what I’m going to call Mussorgsky-esque riffing. It’s got a fine-tuned balance between technicality, dramatics, and militancy. This is one of the defining aspects of Pestilence, if not THE defining aspect. The vocal style would also be another definitive element, with Van Drunen (or Mameli) using a tone that sounds very “vomity” in nature and kind of defines the proto-death vocal style. A lot of bands had this going on, but Pestilence did it — and has always done it — the best.

The technicality of the music itself is pretty mind-blowing for the time period when this record came out. Pestilence knew how to whip out instrumental acrobatics that remained memorable and still brought a surge of adrenaline. It only contributed to the chaos, giving the music that barely-held-together feeling that a lot of the best old school extreme metal had. Definitely an essential record, both for its time and now. 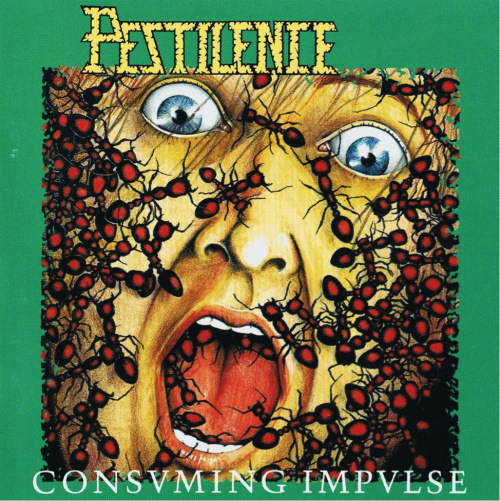 Consuming Impulse is probably the most positively reviewed Pestilence album. It’s also, oddly enough, the least Pestilence of the Pestilence discography. This is also the most straightforward and brutal album of their discography. The tuning is lowered to D (pretty much what every death metal band was doing at this point), Van Drunen lowered his vocal pitch quite a bit, and the band decided to opt away from their alien sound a bit.

Consuming Impulse has the sound, feel, and intensity of a record written with the intent to be a classic, and it earns that title in every respect. The riffs are great, the instrumental performances are tight as fuck and intense, the production fits the aesthetic of the music perfectly, and every song on here is a death metal staple. Pestilence were definitely on fire here; it sounds as if they must’ve felt like they were going to take over the world. This album fucks so much shit up so violently that I can only envision this album being written with the utmost supreme confidence you were going to slay the masses with it.

The album is quite a bit dfferent from Malleus…, as every Pestilence album will be from every other. The technicality is toned down a bit in favor of writing more direct songs, and it definitely has the more well-defined intention of delivering riffs and sections that will just outright rip your intestines through with a chainsaw. A madman with a chainsaw is actually the definition of Consuming Impulse. Not a single ounce of restraint is exercised; all the album does is rip you into a sack of lifeless meat.

Martin Van Drunen’s change in vocal style helps quite a bit. His lower pitch and more distorted venom really push the intensity of the album overboard. Another notable difference on this record comes in the soloing. I think this is where we really begin to see Patrick Mameli coming into his own as a guitarist, as his jazz-influenced atonal brand of shred really makes headway here.

This is another winner in Pestilence’s career, and one of the best death metal records ever made. They definitely had a peculiar spark of inspiration on this album, or should I say a fucking firestorm.