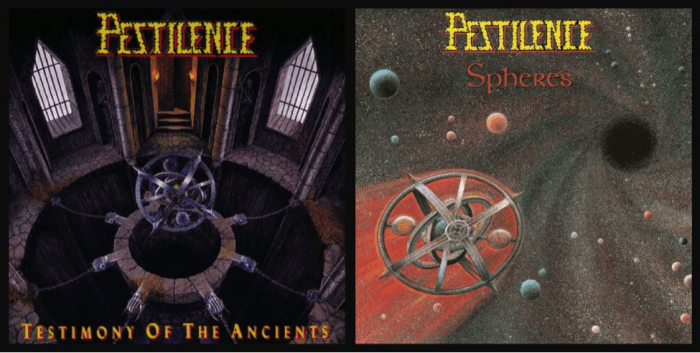 (TheMadIsraeli continues his retrospective assessment of the discography produced by the seminal death metal band Pestilence, whose new album Obsideo was released recently. The first part of this series can be found here and the second part here.)

So, after you’ve released a beast of an album, an album that is praised as one of the greatest death metal records ever, what do you do from there? After releasing Consuming Impulse, Pestilence were at a point where the band had to either continue doing the same thing over and over again with consistently stellar results (not an easy thing), or take a ninety-degree turn and pave a new way.

I suppose I really should be saying Patrick Mameli in particular here, because in the end this is HIS band. This becomes no more apparent than during the period after Martin Van Drunen leaves and Mameli takes up both the guitar and mic duties again. For the Pestilence name, the music that would be produced in the next two records would be a definite risk. Neither containing the feral savagery of Malleus… nor retaining the foaming-at-the-mouth ferocity of Consuming Impulse, the next round of Pestilence material would see Mameli exploring progressive structures and ideas, and digging back into and even further exploring the alien brand of riffing found on Malleus….

It’s here that we’ll see experimentations with odd time signatures, fringe elements brought in from other sub-genres (some jazz fusion elements, black metal, and doom metal stuff) and an overall disregard for the conventional. This is where Pestilence would become associated with the likes of Cynic, Death, and Atheist.

Testimony of the Ancients and Spheres are really out-there records that do seem to have alienated some of the Pestilence fan base who were around from the beginning. Personally, I don’t get it, because this kind of shit is what made Pestilence to me. Sure, Consuming Impulse is great, but it does lack the character that these albums have. That Mussorgsky-esque riffing I mentioned in the last part of this retrospective comes much more into prominence, where Patrick Mameli blurs the line between melody and atonality in downright fucked-up ways. There isn’t much in the way of standard death metal technique or section here, and this would be what has pretty much defined the rest of Pestilence’s career, whether people like it or not. 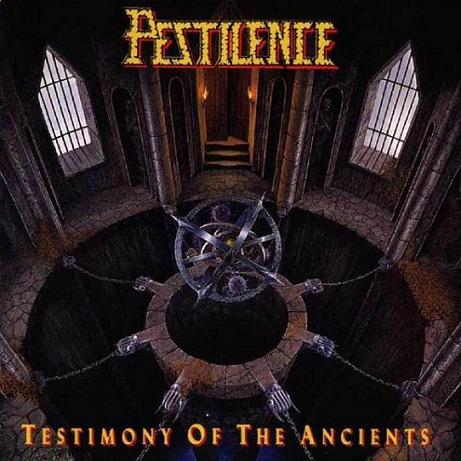 Consuming Impulse may be an outright classic filled with memorable riffs, hooks, and mosh pit starters, but Testimony of the Ancients is infinitely more musically accomplished. It was their most diverse album to date, and certainly one of their strangest (although it is the least strange of the strangest material), and quite frankly, it is ground-breaking.

Pestilence, along with Atheist, Cynic, and Death, paved the way for death metal that strayed away from the diminished and chromatic tonality the genre had almost exclusively embraced. While Pestilence indeed embraced those, this is where we start hearing an extreme metal band exercise an angular tonality, as well as delving into outright melody to spice things up a bit. Not once did Pestilence ever sacrifice the flesh-ripping intensity in doing so either; in fact, it only served to add much-needed dynamic heft to the music.

Testimony… in a lot of ways is one of Pestilence’s most technical and sophisticated efforts. The more thrashy direction of Malleus… is channeled here, but it’s definitely not a throwback. It could be said to be more of simply taking the foundation and moving in a different direction with it. The guitars were tuned back up to standard to reflect this change, but using standard tuning — which is not considered to have enough “meat” in it for most death metal — caused Pestilence to work for something different. This wouldn’t be about writing weighty ordinance fire, it would be about writing warped psychotic episodes. Nowhere is this point made more emphatically than in the opener “The Secrecies of Horror”. The overly metallic cutting guitar tone, accompanied by the teeth-shattering riffs that have the mood of an atonal horror movie soundtrack, really works its way into your soul and freezes it over.

It also helped that a new element — heavy use of keyboards — was introduced here. The frequent use of sci-fi-movie-esque tones really contributed to the album’s feeling of dread and enigma. The composition approach on this album is pretty kickass, mostly in the sense that everything on it is perfect. The keyboards never come in too much, mostly serving as appropriate accents. The songwriting itself became much more dramatic, more “epic” as it were, although I hate to use the word. There was build-up, tension, and release littered all over the place.

I fucking loved this record, from the borderline pure-thrash assault of “Stigmatized”, to the symphonic death-doom experiment on “Twisted Truth”, to the soul-corroding venom of “Prophetic Revelations”. 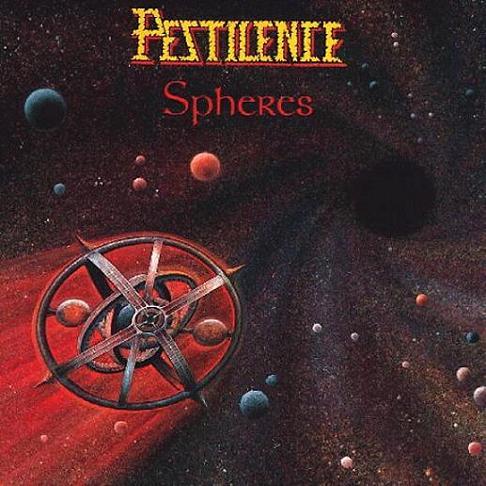 Spheres is definitely the most controversial Pestilence record. It is the least death metal record of their discography, and quite frankly borderline hinges on being something indescribable. Yeah, there’s Mameli’s vocals, you’ll find guitar tone with enough gain to qualify as metal, and there is use of double bass, but the music in of itself is hard to quantify. It’s always been known that Mameli, and it seems whoever else he recruits into the Pestilence fold, love their jazz. So really, what Mameli and company created here was the ultimate clusterfuck; a death jazz fusion record. It’s an album that makes no sense, and it alienated a fuck ton of people. I, however, think it’s excellent and love the shit out of what’s going on here.

There would be no speed present on the album, things taking a mid-paced or groove approach. The more airy nature of the compositions allowed for some downright fucked up shit, a lot of playing with odd time signatures and riffs that were concerned with either pure dissonance or being nothing more than the extension of the absurdist keyboard and synth work going on.

Some industrial elements are also present. The mix had this strange hollowed-out nature to it, the guitars were oddly low gain for the genre (just barely enough to have bite to them), and the guitars and synths often clashed with each other. The heavy use of time signatures that weren’t 4/4 also throws you off quite a bit, but in a challenging way.

Spheres is, essentially, the soundtrack to a terrifying sci-fi-oriented horror flick. It’s an underrated album in Pestilence’s discography, and it’s almost impossible to really articulate what it is. It’s an album that has to be heard to be comprehended, for sure. I love it, although I will admit not as much as the rest of Pestilence’s disco. It’s by no means, though, a bad album. It’s actually quite genius and ground-breaking.

2 Responses to “HIGHER CRITICISM: PESTILENCE — “TESTIMONY OF THE ANCIENTS” AND “SPHERES””