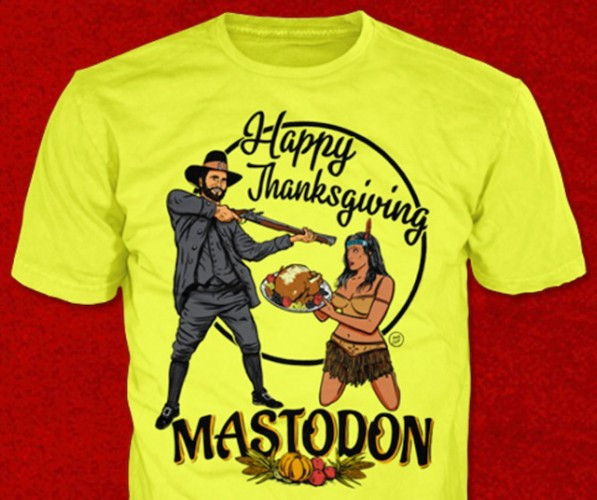 (In this post, guest writer Tal — whose own blog is here — forcefully expresses some opinions about the shirt emblazoned with the above image released by the band Mastodon for this year’s Thanksgiving holiday. As always, Comments are welcome.)

In case you haven’t been on the internet since before Thanksgiving, Mastodon decided to mark that holiday by putting out a really tasteless shirt. The shirt, which shows a male Pilgrim pointing a musket at a kneeling, scantily clad, stereotypical image of a Native American woman holding up a turkey, has drawn outraged responses from members of Native communities (for example here and here). The band seem to think that they are doing something to raise awareness; they wrote on Facebook:

“Regarding our thanks giving shirt, whether you choose to believe or not, the American Indians were massacred by the white settlers who became the Americans we are today. this shirt represents this atrocity and celebrating in the face of this atrocity is chilling.”

They felt the need to add: “we may have a sick sense of humor, but we are far from being ‘Racist’ as some of you who might not get it are calling us.” (What’s actually chilling is that this post had over 4,000 likes as of the writing of this article.)

Mastodon in effect dismisses the criticisms leveled at their choice of imagery by implying that the critics don’t “get” the shirt or somehow don’t believe that Native Americans were massacred at the hands of white settlers, when this is not the problem at all. The problem is not their message, but the way they’ve chosen to execute it, and the band’s response just makes it worse.

By attempting to stifle the opinions of the very people they’re supposedly trying to support, they’re in fact perpetuating the racism they claim to be against. As one comment on the shirt read,

“To try and prove a point of how NDNs were horribly treated by the settlers is admirable, but when you offend the entire population of said descendants of said NDNs then no matter how innocent the intention it is a fail. When you then try and tell the millions of offended NDNs how they can’t be offended, then you become the pilgrim with the blunderbuss pointing it at the head of each and every one of us.”

I debated about whether to write this article for many reasons – the firestorm of comments sure to ensue, the fact that I’m not a Native person, the knowledge that it would give Mastodon’s stunt more publicity, which was surely why they did it in the first place. But in the end I decided that this was too important for me to remain silent – especially in the face of the mainstream trying to drown out the Native voices protesting against this shirt. I don’t claim to speak for any Native people, but I want to add my voice to theirs pointing out something that just ain’t right, no matter what background you come from.

The band, as well as the people who are saying it’s “satire” or “a joke” are missing the point of those who object to this shirt. No one is disagreeing with their intention to expose the falseness of the Thanksgiving story, but with the thoughtless execution. It’s not funny. A joke can still be so tasteless or offensive that it should never be uttered. And it’s in no way clear that this shirt is satirical on the level that the band implies; their supposed “satire” of the Thanksgiving myth is obscured by the problematic imagery they’ve chosen. They probably thought the shock value of a Pilgrim pointing a gun at an Indian would force people to confront the truth. If it makes you uncomfortable, then it makes you think about the issue, right?

Well, I have two problems with that.

Sure, the image depicts violence against Native peoples, something that is often glossed over in elementary school versions of the Thanksgiving story. But it doesn’t do anything to challenge the violence – the continued erosion of Native languages and cultures, severe poverty and lack of economic opportunity, disproportionate rates of mortality due to lack of healthcare – that continues to this day. It doesn’t challenge the power of Anglo society over Native peoples at all, and disturbing Facebook comments prove that there are people who gladly take the image of dominance at face value and gloat over how their Anglo ancestors got the better of Native people.

Native Americans are not a thing of the past, and neither is the oppression they face. As one Facebook commenter points out,

“people talk about our ancestors and what their 8xgreat grandparents did but what most non-natives don’t relive is that there were Indian missions stripping natives of there language and culture up to the 1980’s. there are still people taking potshots at my fellow natives trying to run them off public hunting ground. the decimation of the native population is not something that happened. it is happening. it is very much a current event and has been for 500 years.”

Another commenter points out how the violence is present even in the debate over the shirt:

I’ve seen several comments stating that the image is nothing to be upset about because metal is supposed to be shocking and disturbing. I agree that we didn’t sign up for this genre to be conformist and PC. I also think, however, that the metal community has a duty to use the genre’s shock value to resist the mainstream and fight injustice, not to further racism and repression. While controversy does garner attention and ferment discussion, this choice of imagery puts Mastodon in the same league with the NSBM bands in terms of being “controversial.” That’s not the side of the fence where I want my musical tastes to place me.

In addition, the image used to represent Native Americans is not only stereotyped, in no way an accurate representation of the Wampanoag tribe that the Pilgrims interacted with, but it also perpetuates the sexualization and objectification of Native women. One would think if Mastodon cared about the history of Native Americans, they would use an image that accurately represents a particular Native culture, since they are not all the same. One would think if they cared about the dignity of Native people, then they wouldn’t objectify a Native woman. Since this sort of image is as familiar to the average American as Disney’s take on Pocahontas, perhaps it isn’t too surprising that they chose it, but that doesn’t make it right, and it’s in no way “the truth” or “accurate” as some commenters claim. No one is denying the genocide of Native Americans; people are speaking up against the offensive way a Native person – a Native woman – is depicted on this shirt.

“This image is so disturbing it warrants a trigger warning to any Native woman who has been abused or assaulted by a non-Native man. In fact, non-Native men commit sexual violence against Native women at such epidemic levels that it pushed Congress to pass provisions that help protect Native women in the Violence Against Women Act just last winter. Trivializing sexual violence against women is inexcusable. It is not art, and it’s not funny.”

If you think about it really hard, the image can be interpreted as a satire of mainstream media images of Native women – but this interpretation is so distanced from the actual image that it feels like reading too much into it. With that line of thinking, every pornographic image of a woman dressed up in an “Indian” costume could be interpreted as satire – hardly likely! The most obvious message of the image is one of objectification and subjugation of Native women, something that is in no way enlightened, nor metal.

To boil it down, the shirt is offensive primarily for its stereotyped and sexualized depiction of a Native woman, in a situation whose supposed satirical nature is unclear, while its dynamic of oppression and violence toward Native people, and Native women in particular, is all too clear. This is what I see when I look at this shirt. I don’t claim to speak for Native people, but to see one people oppressed by another, or to see women degraded, is something that disturbs me as a human being, not as a member of a particular group.

Does a shirt really matter so much? It matters as much as every Native woman that is raped – one in three, more than twice the national rate – and every Native person that dies due to lack of access to adequate healthcare. Not until we challenge the relegation of Native people to an exoticized, objectified, or forgotten role, whether in pop culture or in underground subcultures, can we effectively address the issues affecting Native communities. We must pay attention to the little and the big things if we are to change as a society. If there’s anything redeeming about this shirt, it might be that it brought the issues faced by Native communities and women especially to the fore of the metal community.

The shirt has disappeared from the band’s website, and Facebook comments seem to imply that it sold out. That means the band has made a good bit of money off it – in essence, continuing the exploitation of Native people for the profit of white men. As blogger Jordan Darville writes,

“The shirts cost $22, and there’s no indication that a fraction of the proceeds go towards any sort of Aboriginal charity. This means Mastodon can still profit off the genocide of an entire people, even if they were born a few hundred years too late.”

There have been many comments calling for the band to donate profits to Native American charities. Considering the band’s response so far, this seems unlikely. It’s up to us metalheads then to show our support for true Native American causes. I encourage every person that abhors this shirt and Mastodon’s tactless attitude to donate $22 to an organization such as the Native American Heritage Association, National Relief Charities, Native American Rights Fund, or another of your choice (here are some more ideas).

At the same time, we can’t let the issues faced by Native Americans get swept under the rug after clicking the Donate button. This T-shirt and the controversy it has inspired just go to show how pernicious stereotypes and racism can be. By ignoring the concerns raised by Native people and others, Mastodon threw out an enormous opportunity to foster dialogue and understanding between Native Americans and the other inhabitants of the Americas about the racism faced by Native people, as well as to raise awareness about the serious issues confronting Native communities to this day. Instead, they chose to perpetuate and defend harmful stereotypes and racist imagery, and to continue to silence and oppress Native people. If anything, this shirt should remind everyone not of the atrocities of the past, but of the atrocities that continue to this day.