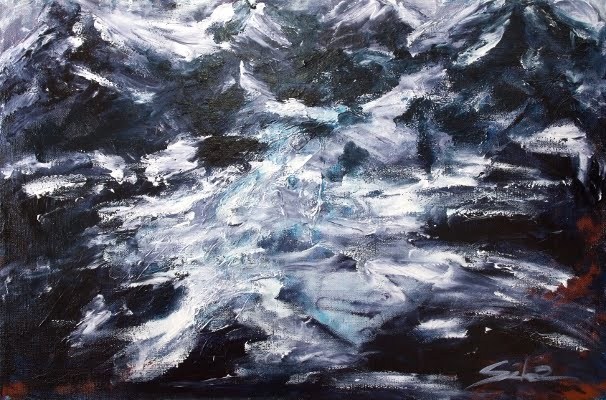 (Guest writer Alain Mower is back with recommended releases appropriate for the season.)

As prophesied in ice and fire, winter has come and – as pointed out in Ben’s guest article ”At the Heart of Winter” – with the change of seasons into the most dark and frostbitten of them all, in conjunction with the beginning of hunting list season, we need a little extra something to help offset the fact that we can’t just hibernate this season of stillness and death behind us.

Also, while undeniably a necessary part of any tried and trve vinter, I’m going to try and leave off the classics in favor of featuring some (relatively) modern releases that are more recently bidding for the throne of winter. It’s not that Immortal, Windir, and Ulver haven’t put out the most quintessential albums of the season, it’s just that some young wolves are just getting their first real taste of fresh blood, and they deserve some mentions too.

Also, not all the releases listed here are metal, but I will argue to the death that all of them are Winter. So, without further longwinded gusto, here are ten albums guaranteed to help you meet the heart of winter head on.

An album that tactfully balances traditional Romanian instruments/chants and chilling synth atmosphere with Enslaved-esque Progressive Black Metal forays on the delicate point of a silver-tipped stake; this pin has always been driven deepest into me on those gray days when the sun struggles simply to get through the sky.

Nest – ‘Trail of the Unwary’

This album is the usher, for me. It seems to lead me into the winter every season right as the Fall inevitably makes its descent back into the season of death. In fact, if it were hypothesized that this Finnish neofolk spell might even be what causes the season to turn, I wouldn’t be surprised in the slightest.

An Autumn for Crippled Children – ‘Lost’

As far as ‘atmospheric black metal’ goes, you will be hard-pressed to find a better band than this Dutch trio. Bringing melody lines to the forefront and building them up, just to dash them against the ice and watch the life drain out, the juxtaposition of innocence and maturity aptly fits the first lazy snow fall serenely proclaiming that death has come.

These Finns seemed to pick up right where Ulver left off, underproduction perfectly framing an already unorthodox sound. In the composition of both esoteric black metal and haunting acoustic tracks, it seems this duo are hell-bent on proving their discovery that there are multiple paths to nirvana. This is music to be blizzard buried under.

Bands that truly understand how to create and incorporate space to provide depth in metal are almost as sparse as the deserted, disenchanted soundscapes created on this Icelandic masterpiece. Easily up-tempo enough to drive through snow-covered roads to, but also dense enough to keep you rechecking that you remembered to put on your snow tires and chains, these hypnotic tracks never fail to leave me reeling at each completion.

I know I said I was going to leave the older classics off the list, but this German sound artist’s dark ambient album is easily one of the best of the subgenre in spite of its nearly 15 years of age. While nothing short of an elite stereo system truly does the frequency painting on this album justice, the depth and beauty is always enough to shut me off from the outside world and draw me into the Antarctic world.

Nothing says it’s Winter quite like one-man black metal projects, and ColdWorld is head and shoulders above the rest. One of my all-time favorite albums, I cannot give enough praise to the mastermind, German George Börner, who is only as reclusive as he is brilliant.

Emancipator – ‘soon it will be cold enough’

A staple album of the cold season for me since its release in 2006 by then 19-year-old music phenom, Douglas Appling, this album beautifully incorporates classical guitar, programmed drum foundations, and sampled vocals, and features leads spanning a spectrum of instruments and sounds.

Fans of the band will be quick to note that this release truly saw Agalloch catapulted into the spotlight, and how deserved that ascent was. A rare album wherein the lyrics manage to sound just as hope-deprived as the vocals, and the acoustic guitars as gut-wrenching as the electrics, it is an experience not many listeners live through, and best saved for the inevitable winter solstice day when the sun finally fails to rise.

This. I can’t think of many albums in 2014 I’m looking forward to as much as this groups Alpha, which saw its exclusive release information, and a track premier, earlier this year here at NCS.

(Alternatively, if you are in the Southern Hemisphere, this list is guaranteed to help you save money on a/c costs by lowering the temperature of everything within earshot a few degrees (Celsius!). So no worries, you’re all still fellow brethren of the northern darkness, even if you’re just blasting these albums in the general direction of casual beachgoers.)

What are some of your quintessential Winter albums?

12 Responses to “ALBUMS TO SURVIVE A LONG COLD WINTER TO”