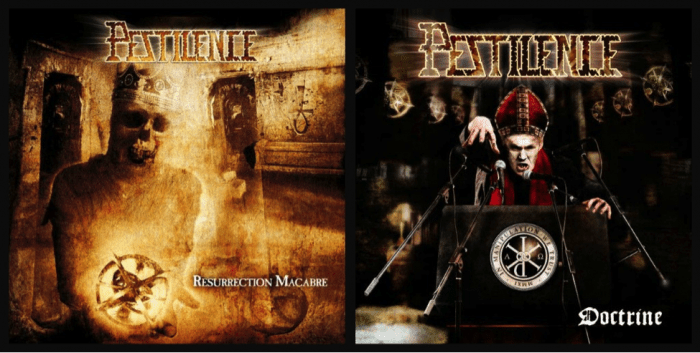 (TheMadIsraeli continues his retrospective assessment of the discography produced by the seminal death metal band Pestilence, whose new album Obsideo was released recently. The first part of this series can be found here, the second part here, and the third part here.)

Spheres, released in 1993, would be Pestilence’s last record for quite a while. I don’t know exactly what prompted that delay, although I know Spheres was not at all well-received. Maybe it was a record too ahead of its time, who knows. As far as it appeared, Pestilence were done. Mameli would go on to try and make a band called C-187 (who were widely regarded as absolutely terrible) his new haven, but it didn’t work out.

So, with so many years of silence and the only peep from the band’s founding member being something that never got off the ground, I think people must’ve been shocked when a Pestilence reunion was announced. I remember the great deal of hesitancy on the part of Pestilence fans at that time, principally those who felt Spheres was garbage and those who remembered C-187.

It sucked, the skepticism that Mameli was under. As I stated in the last piece, I think Spheres is a great record. I will say, though, that C-187 was not exactly the best musical move. The man was under a lot of pressure, and every Pestilence record post-reunion has suffered from what I felt was shallow and baseless criticism. People were and still are hung up on Consuming Impulse. I can’t say I get it.

Mameli only had one partner in crime he could rope into this renewed effort. That person would be Patrick Uterwjik, the band’s second guitarist since Malleus…. For whatever reason, the rest of the band was out of the picture. This would become a sort of defining feature of the re-formation era Pestilence. Each album would have a different lineup aside from the core of Mameli and Uterwjik, and that has resulted in some of the most spaced out differences in sound in the band’s catalogue.

In a lot of ways, the newer Pestilence material is the most sophisticated stuff they’ve ever done, if nothing else for the particular musical bents they toy with on each. Resurrection Macabre and Doctrine are equally phenomenal albums, like the rest of what the band have had to offer, and Doctrine quickly became one of my favorite Pestilence records. 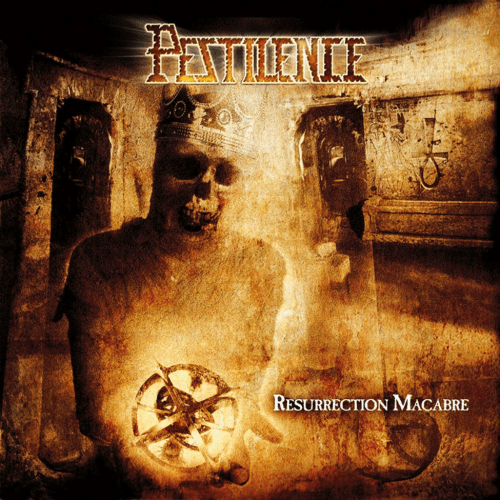 Resurrection Macabre is the only album Pestilence ever did that sort of mish-mashed styles and elements from previous albums. An attempt at fusing the carnivorous, razor-sharp technical edge of Testimony of the Ancients with Spheres’ disregard for conventional melodic approaches and Consuming Impulses’ bestial grit and grooves make this the most comprehensive album in the discography. It’s an extremely varied record in terms of just how many ways Pestilence sonically dismember you; it has maybe the best mix they’ve ever had; it definitely has the best guitar tone they’ve ever had. I can’t say I’ve heard a guitar that seriously sounds like the sharpening of an edged metal weapon before, or since.

The line-up Mameli and Uterwjik assembled for this record was also the stuff of greatness. Tony Choy of fucking Atheist would be on bass, and the drums would be provided by none other than Peter Wildoer of Darkane fame.

Resurrection Macabre is an album that is impossible to categorize by sub-genre. It’s certainly death metal, but it’s old school, tech, brutal, and progressive all at once. Peter Wildoer turned in the best drum performance the band have had in their music (although Dave Haley’s performance on Obsideo might beat it) with his brand of controlled chaos. His tactical-nuke style of precise double bass and blazing fills suits the music’s precision-guided style perfectly. There are no wild sections here; everything is calculated to the T and performed with machine precision. One criticism of this album is how cold and almost lifeless it is. I would argue those people are missing the point that this was how the album was intended.

Mameli’s vocals take a dive in pitch, bringing the deepest tonality he’s exercised so far. It fits — a frothy bestial tone that sounds like he’s drowning from fluid in his lungs. It complements the music’s suffocating, tight feel perfectly. As a guitarist, I find the guitars on this record exceptionally delightful (it was one of my favorite albums of 2009). The riffs are sophisticated and retain that Pestilence signature atonality, while Mameli and Uterwjik take their jazz-fusion alien shred to the next level.

The Pestilence Mussorgskyian ethic is reaffirmed and redefined on this record. In a way, I think the band meant for this to be THE Pestilence record, before they would attempt to shift their sound into totally new waters. It’s a technical and musical marvel.

Despite skepticism and despite cynical downplaying, Pestilence came back with thunder in Resurrection Macabre. Now it was time for a step forward, or maybe more like a step sideways. Mameli and Uterwjik would take Pestilence’s sound to a controversial place. They announced the new Pestilence record would be played on eight-string guitars, a ballsy move to be sure. Extended range guitars still get a lot of hate in the hard line extreme metal scene, mostly for good reason. It’s only now that we’re seeing such bands as Rannoch and In-Quest use eight strings to maximum potential. Pestilence would turn out to be another such band, although a lot of old school death metal die-hards would disagree.

The bass and drum slots would be once again filled with immense talent. Pestilence would rope back in a third previous member, Jeroen Paul Thesseling of Obscura. Jeroen, to some people’s surprise, was the bassist for Spheres. The drum slot would be occupied by extremely young blood, Yuma Van Eekelen, who replaced Textures’ Stef Broks on the kit for jazz fusion metallers Exivious.

Doctrine is an unrelenting assault of bestial brutalitarian barbaric savagery. Pestilence would maintain the dissonance and alien nature of Spheres, but the rest of the music would take on its own identity. Doctrine is, in a few words, chunky, vulgar, and massive. There is a strong emphasis on groove that would destroy walls of titanium with its impact force (although the album also includes a few scorching deathrashers). The band know how to utilize the low-end chunk of eight strings to maximum effect, milking the teeth-clenching power surge they produce as much as possible. They retained a good deal of the signature technical noodling, but it’s dialed back here for the sake of caving in your rib cage with a morning star.

The other element that defines Doctrine is Thesseling’s abnormally constant presence in the music. Everyone who listens to Obscura knows the man is accomplished at making the bass a seamless part of the composition instead of a mere rhythm section, but here he gets to shine as much as the guitarists. While he does a fine job of holding down the meat when the music calls for it, it’s his constant deviations from the guitars combined with his fretless bass tone that give this album a rather quirky edge. The little motifs and harmonies he applies to the riffs are astonishing good, even to the point that it’s his bass that produces the hooks, not the guitars. He also gets the chance to pull out some wicked bass solos that contribute to the album’s titanic yet eerie and disgusting sound.

Mameli once again changed his vocal style, adopting a much higher-pitched tone than he’s ever had. A lot of people didn’t care for this, but I ate the shit up. I always compared it to him sounding like a prisoner in an asylum, screaming in absolute revelry of his madness (a fitting element considering the album lyrically deals with the insanity of religious zealotry), making his vocal performance really the most intense that he has offered. The vomity character of his vocals is also turned up to the max here, Mameli unafraid to make plain undistinguishable noises, all for the sake of accomplishing the album’s tone.

I fucking love this record and will never understand the criticisms directed at it. It is gargantuan, filthy as all fuck, and disturbingly eerie. This is the kind of shit Pestilence are all about, and always have been about. Pestilence have produced a consistently stellar, yet diverse body of work that for me defines progressively minded death metal. I don’t mean that it’s progressive per se, but Mameli is always thinking in terms of moving forward, changing things up, never standing still. It’s what has defined the band’s work for me, and it’s been consistently excellent every time.

Pestilence are exactly the kind of band fit for this series, but unlike previous subject Kataklysm, I can’t think of a single “bad” album or album you could simply ignore. Every Pestilence record is worth hearing for different reasons, and are all phenomenally excellent at what they set out to accomplish. However, if you want my personal take on it, if someone asked me what albums by this band MUST be heard, they would be…

But this may change. Watch out for my upcoming review of Obsideo.