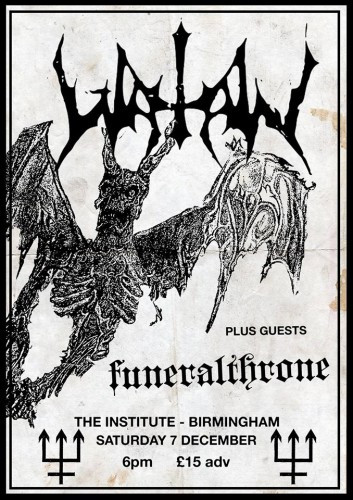 (Our UK-based writer Andy Synn was present when Watain, Funeral Throne, and Coltsblood played Birmingham, England last weekend, and he delivers this report.)

Is there a better way to spend a Saturday evening than experiencing the metallic musical rituals of Satan’s own special cheer-squad, Watain? Maybe a few, but not many that don’t involve taking off your clothes…

As it stands, myself and my good friend Gary (both fully clothed) jaunted our way over to Birmingham early Saturday evening. Arriving a little earlier than we needed to (despite doors opening at 6:00), we dropped into a pub on the corner, and eventually found ourselves seated at a table right next to the headliners and their entourage.

Obviously we didn’t want to bother them – particularly since the group formed a tight knit and inviolable circle that exuded a certain “keep away from us” vibe – so we just decided to enjoy our beers and catch up. It was, however, interesting to see how far the band have co-opted the biker/gang mentality and look, everyone dutifully wearing their patches and “colours”. It works for them though. Watain (and their associates) have always been a “gang” – now it’s just more visually obvious.

After a couple of drinks we decided to wander into the venue, check out the merch table… grab another drink… and find a spot to watch opener Coltsblood. And sweet merciful god below, I’m glad we did. With a truly crushing, monolithic sound, the three-piece certainly may not have been the obvious choice to provide support to the Swedish outlaws, but their grim, howling doom offered a welcome and different form of darkness.
Rumbling, gut-level bass lines, hanging, guillotine chords, squalling guitar dissonance, and brash, resonant drums made up the core of the band’s sound, while the stripped and bare-bones vocals were delivered in a Tom G. Warrior-esque bellow – wounded, anguished, and broken by despair.

Every song was a binding, burnt offering of punishment and pain, which slowly but surely insinuated its way into the collective unconscious of the gathering crowd. Remember the name.

Up next was the ballsy, swaggering black metal of Bristol’s Funeral Throne, a band whose name has been hovering around the periphery of my awareness for some time now (though I’ve never before had the chance to check them out).

Certainly not lacking in confidence, they hit the stage running – figuratively speaking anyway – with an uncompromising mix of big riffs, big hooks, and big drums, ploughing through song after song with little in the way of introduction or hesitation.

That being said, it took a few songs for things to really come together in the way the band clearly wanted them too – the crowd perhaps needing a more potent injection of energy and vitality to perk them up after the dragging emotional vortex they’d just been put through.

When things finally clicked though – pretty much exactly at the point when the quartet unleashed their faster, more storm-driven material – the crowd responded enthusiastically, and the band certainly left the stage with more fans than when they started.

Truthfully though, it’s difficult in hindsight for any band to truly match up to the task of opening for Watain. The group have, with little hyperbole, become a fantastically lethal live force, and have demonstrated themselves, time and time again, to be more than worthy headliners, bringing their Satanic musical ritual to an impressively sized audience this evening.

With a stage backdrop designed to resemble a medieval ossuary, coupled to a creepy, forbidding light show, the band have clearly taken great care in refining every aspect of their appearance and presentation.

A lot of thought – meticulous and calculating – clearly goes into the way the band present themselves, every element of their aesthetic adding to the overall atmosphere, from the thick shrouds of smoke that periodically drench the stage, to the ever-present clouds of incense which serve to enhance the depth and drama of the experience.

Now if, like me, you found yourself a little underwhelmed by the band’s latest album, you’ll be pleased to know that in the live arena the majority of the songs more than live up to their predecessors – particularly opener “De Profundis” (which you can see below) and a haunting, skin-crawling version of “The Wild Hunt” (a song that my companion was initially doubtful the band would pull off live).

The highlight of the evening was, of course, a magnificent rendition of “Sworn To The Dark” – delivered and received with an almost religious fervour by both band and audience – although this was also, in many ways. a double-edged sword. The subsequent pairing of “Outlaw” (despite an impressively strong start) and “Holocaust Dawn” (easily the most disappointing song of the whole evening) produced something of a lull in the night’s otherwise rapturous atmosphere, paling in comparison to the brilliance which preceded them.

Thankfully, the Swedish slashers ended their set with the truly epic “Waters of Ain”, whose endlessly compelling mix of scything riffs and soaring, melodic leads transformed the assembled crowd one last time into a fervent mass of demon-possessed disciples.

As the song ended, the band slowly left the darkening stage, leaving behind only the ever-enigmatic Erik Danielsson. Lost in his own private trance, he slowly and reverently snuffed out each of the candles burning at the back of the stage, before turning and offering the crowd one last solemn bow, simultaneously an act of thanks and approbation.

A striking end to a striking evening of devilish music and Satanic art. As above, so below. 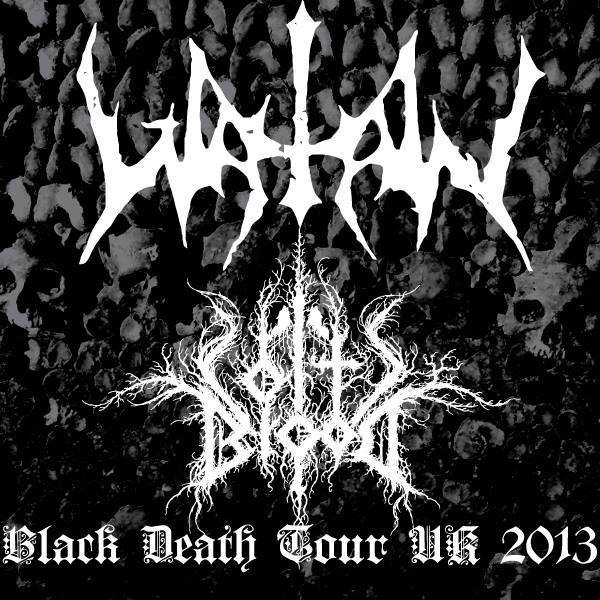