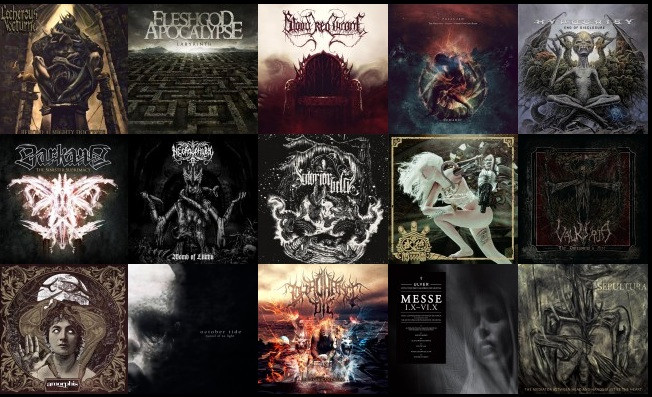 (Here’s the second of Andy Synn’s five year-end lists. His list of the year’s “Great” albums can be found at this location. More lists coming in the days ahead…)

So here we are. List number 2. The “Good” albums. It’s a varied list. Not just in terms of a cross-section of the various metal sub-genres, but also in terms of just how good each album is/was.

There are some here that fell just shy of greatness. Some played solely to their own crowd – solid, safe, occasionally impressive – but a good listen nonetheless. There are some albums that went too far (too many songs, too many influences, too much in general…) and some that didn’t go far enough (lacking that one special spark that would really have put them over the top).

The thing to remember is that all these albums are good… maybe even edging on great… it’s just that in a year where the quality was so high (and it really was), they can’t do much more than graciously collect a silver medal this time around.

In terms of sheer bruatlity, the savage technical death metal of Lecherous Nocturne and the sheer symphonic audacity of Fleshgod Apocalypse both offered up multiple moments of excellence (I’d argue that the songwriting on Labyrinth was definitely a step-up from Agony, for one thing), while the ripping, tearing, rabid ferocity of Blood Red Throne’s self-titled effort continued their own path to greatness and glory.

Against The Plagues, Sidious, and Fallujah each produced a brilliant EP’s worth of devastating death metal which promised great things for the future, while Hypocrisy showed once more just why they’re still such a revered and respected force in the extreme metal world.

Despite delivering some truly punishing songs, both Necrophobic and The Bridal Procession bit off more than they could handle with their latest albums, each one going on a little longer than necessary. Some judicious pruning/editing would certainly have helped. The blistering technical/groove/death-thrash of Darkane and Living Sacrifice managed to get heads banging and blood pumping, but neither quite matched up to what the band is capable of when they’re truly “in the zone”.

Two of my favourite French bands fell just short of greatness this  year, Gators Rumble… by Glorior Belli rambling where it should have rampaged, and Apex Terror by Otargos pulling back on the atmosphere in favour of pure, primal rage. Shining’s experimental 8 ½ … was a fascinating, if flawed, reinterpretaton of the band’s early days, while Chthonic’s Bu-Tik saw the band straying ever farther from their roots, with a brace of songs determined to embrace as many influences as possible.

Both Svartsyn and Valkyrja unleashed a new wave of maniacal musical murder this year, while Enshadowed and From The Vastland brought black magic to life through a conjuration of whirlwind riffs and stomping force. On the more esoteric side, both Rudra and Tengger Cavalry showed just what can be done when a band takes the basic tenets of a genre and reinterprets them through a fresh cultural prism.

Tunnel of No Light by October Tide didn’t quite manage to reach the same heights of its predecessor, and the otherwise fantastic Aetas Cineris by Agrypnie also faltered ever so slightly, held back by its own excess of ambition. Few bands, though, can be as ambitious as Ulver, whose latest album is as creative and mystifying as anything they’ve ever done.

Amorphis, Memfis, and In Element wove magical melody and taut riffery together with varying degrees of awesomeness this year, whilst new releases from Scorned Deity and Your Chance To Die saw both bands beginning to build a promising foundation of pulverising melodic death metal might.

And finally, this year also saw two living legends – both of whom have suffered with line-up changes and uncertainty over the years – buck the odds and smash out a pretty brilliant album each, with Shai Hulud’s Reach Beyond The Sun and Sepultura’s The Mediator… showing that you most definitely can teach an old dog new tricks.

Against The Plagues – The Quaternion EP

The Bridal Procession – Descent Into Arcologies

October Tide – Tunnel Of No Light

Shai Hulud – Reach Beyond The Sun

Sidious – Ascension to the Throne ov Self

Your Chance To Die – The American Dream

Tomorrow, the contentious list of the albums I found most disappointing this year.

Feel free to make guesses and prepare yourselves for the worst, by taking a look at what’s NOT been featured on either of the two lists already published!