Now I have new music to share. “Of Feathers and Flames” is the song’s name. It’s both a blitzkrieg assault of feral power and a stomping death march, both a ravaging storm and a swirling fog of funereally bleak melody, both a merciless battlefield fusillade and a dismal downpour of staggering hammer blows. After being stunned by 2012’s Obsidium I had very high hopes for Sovereigns. Sounds like expectations will be met.

Enthroned’s Facebook page can be accessed through this link. 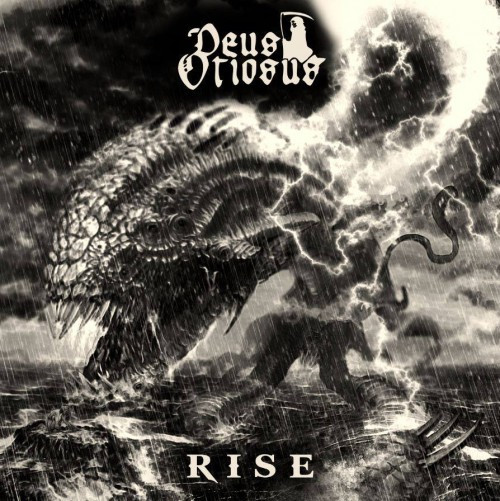 Deus Otiosus is Latin for “idle god”. It’s a phrase that refers to a theological concept of a god who created the world, set it in motion, and then checked out, leaving things to unfold as they have, i.e., not so well. Deus Otiosus is also the name of a pulverizing Danish death metal band we spotlighted for the first time in a MISCELLANY post during August 2011.

I haven’t written about them since they began releasing advance tracks for their second album during the summer of 2012, but today I discovered a lyric video for a new song from their next album, Rise, which is coming this summer from Deepsend Records. As you can see, it’s adorned with cool cover art by Danish artist Claude Wit.

The song is “Iron Rule” and it rules. The riffs whip with tremolo-picked fury and stab in jagged bursts. The double-bass regularly drives into the red zone. The vocalist goes cavernously low. The soloing pierces like an acetylene torch. This is death/thrash that will set your hair on fire.

6 Responses to “NEW MUSIC FROM ENTHRONED AND DEUS OTIOSUS”