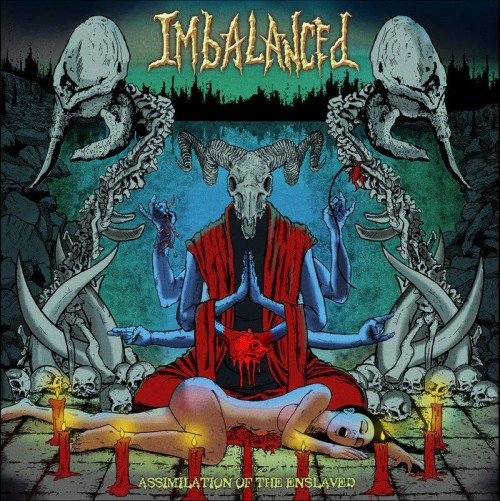 (Our man Leperkahn reviews the new EP by San Diego’s Imbalanced., and delivers a full stream of the EP to boot.)

If you’ve followed NCS for a decent amount of time, you may remember the Imbalanced name from when I covered them in my second post for the site, a San Diego death metal/Bob Filner-themed affair. Luckily for us, the trio have returned with a new mini-slab of their blistering technical death metal for us all, in the form of a new EP entitled Assimilation Of The Enslaved, replete with the intriguing cover art of David Correa.

When describing Imbalanced’s sound to interested parties, I’ve pretty much always used Arsis as a reference point, and that point still stays. However, the grittier production of this EP (as compared to most of Arsis’ output), whether by design or necessity, has helped these guys create a different sound, a sound that is wholly and uniquely Imbalanced. 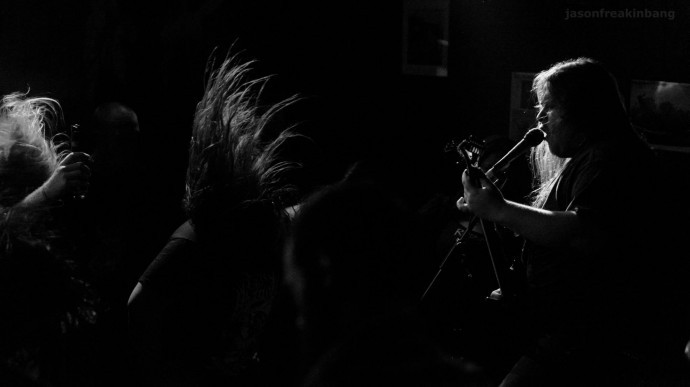 This EP starts off by correcting one of my few gripes from their previous EP. The intro track this time (rather, the first few minutes of the impeccably-titled opener “Perfume On A Pig”) serves to greatly enhance the eeriness and tension of the disc, making the impact of the true start to the record all the more powerful, as opposed to the rather asinine vomiting noises that opened “Wet & Wreakless”.

The song proper sees guitarist/vocalist Ben Cockerham (also of black metallers Ruines Ov Abbadon, if that name rings a bell for anyone) deftly gliding across his frets, with bloodcurdling shrieks and guttural roars in tow. Drummer Tim Bennett more than keeps up as Cockerham and bassist John Knoell tear through a ripping solo before moving into the subdued opening of “A Man Of Habit”, a track that brings out the black metal side of Cockerham’s writing before escalating into another frenzy of arpeggios and bass flourishes (not to mention a righteous riff that last from about 1:30 to 2:00, and repeats after an equally righteous galloping riff comes in).

“A Man Of Habit” is really just chock full of fantastic riffs, all of which you simply want to have on repeat for days, and that’s not even mentioning the unexpectedly soulful, pained solo that highlights the last minute of the track.

A rather rambunctious bass solo from Knoell signals a change back to the hard-charging, torrential mayhem many have come to rely on from Imbalanced on “The Organ Farm”, though this time the boys deliver with even more compelling riffs, seriously upping the ante from their already splendid debut.

The EP closes with the nearly seven-minute long “Dissolve Into Oblivion”, a rather resplendent number with a more laid-back pace to let some doomy, blackened influences creep in to their brand of technical death metal. That’s not to say they don’t unleash some hyperspeed sections throughout the song of course, or that Tim Bennett’s drumming gets any less blistering. Ben Cockerham continues to punctuate the music with searing solos and scalding screams, with one more of his more soulful solos serving to bring the EP to a close.

Already working on a solid foundation, Imbalanced have gone beyond expectations on Assimilation Of The Enslaved, refining and tightening their sound, tweaking their weaknesses into strengths. Don’t take my word for it though; the band has been kind enough to provide us with a full stream of this bludgeoning sophomore effort. Enjoy below.

9 Responses to “AN NCS PREMIERE: IMBALANCED — “ASSIMILATION OF THE ENSLAVED””