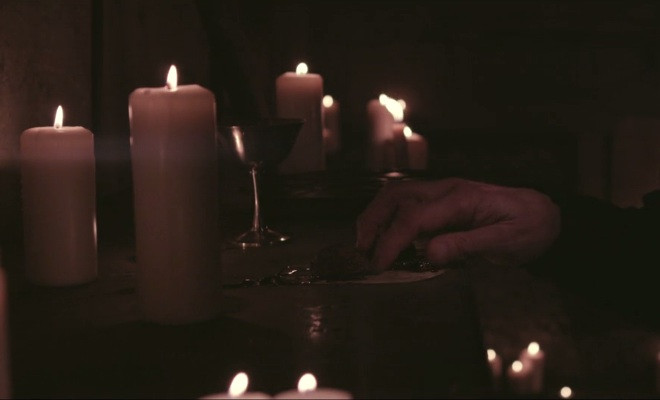 Everyone who worked on the video should be congratulated; it’s beautifully made, with a high level of professional skill. And Rotting Hills should be congratulated on the song as well. It’s slow, spare, and deeply sombre, a gradually unfolding piece that moves from the beautifully melancholy to a wrenching cataclysm. The video is one of those prized accomplishments in which the music and the visuals not only complement but also enhance each other.

When you start this, you may wonder where it’s going, both musically and in the story line — and I’ll tell you: it goes to a very dark place.

I first came across Switzerland’s Schammasch last August when the first advance track from their new album Contradictions hit the airwaves. In recent days a second track premiered, and it ensures that Contradictios will be worth hearing in full.

“Split My Tongue” intertwines a variety of elements from different musical genres — including doom, death metal, and black metal — though the atmosphere of the song is dark and ominous throughout. It begins slowly, with bleak reverberating chords and a booming low end providing the backdrop for a combination of anguished howls and bestial roars and a piercing, occult lead guitar melody. It’s crushing and mind-altering. But the song eventually erupts in a ripping blast-run of black metal ferocity — and culminates in Gregorian chant. If you have trouble wrapping your mind around all that, just listen below.

The album will be released by Prosthetic Records on April 28 and can be pre-ordered here. 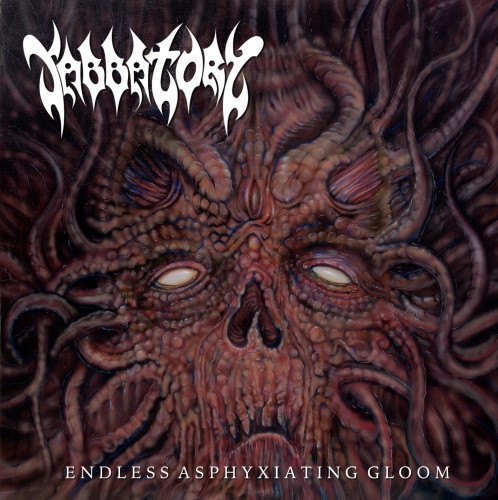 Sabbatory are a fairly new band from Winnipeg, Canada, whose debut album Endless Asphyxiating Gloom is due for release by Unspeakable Axe Records (and distributed by Dark Descent) on May 27. One of the new songs, “Orbiting Obscuron”, debuted on April Fool’s Day, and I’m digging it. It’s a mix of writhing and jabbing riffs, d-beat rhythms, ugly vocal excretions, and a dank layer of suppurating decay. The song moves from a doom slog to a jolting rush. Fans of gloomy old school death metal should enjoy this. I know I did.

You can stream a second song (“Infantasy”) at this location. 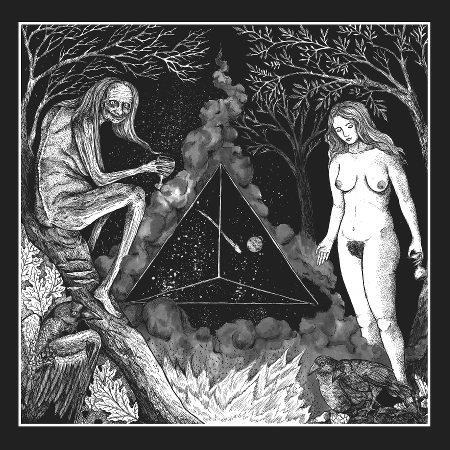 Black Monolith is a one-man genre-bending band from Oakland, CA, the one man being Gary Bettencourt. I first discovered Black Monolith through the release of a debut demo back in 2011. In my review, I wrote: “Oh yes, definitely remember the name Black Monolith. We’re expecting great things from these genre-bending maniacs.” (Back then, I didn’t know there was only one maniac.) And indeed, it appears my expectations are about to be rewarded.

Black Monolith has now recorded a debut album entitled Passenger that will be the first release of a new label named All Black Recording (a venture of Deafheaven’s George Clarke and Derek Prine). It sports cover art (above) by Bryan Proteau, additional art by Reuben Sawyer, and a layout design by Kevin Gan Yuen of Sutekh Hexen (and all those people have done standout artistic work in the past, so I’m psyched to see the complete look of this thing). A couple days ago, a song from the album named “Gold Watch” got its premiere.

A big onslaught of grinding gears, methodically blasting drums, pealing guitar chords, and wolfish cries — that’s how the song begins. And from there it moves into a d-beat-driven lope, with the hammering of infectious, crusty riffs keeping pace. I’m pretty sure you won’t be able to sit still while this wolfpack is on the run, especially when the song vaults into a different driving rhythm just as a hook-laden guitar solo takes hold. The ending took me by surprise — and I’ll leave the surprise for you to discover on your own. All I’ll say is that it works.

The album is due on gatefold vinyl later this month.