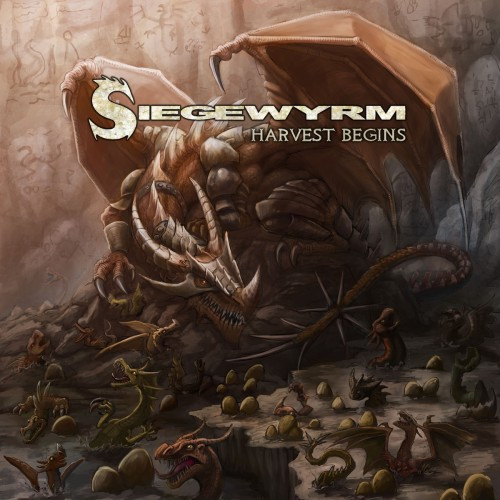 (Guest writer Booker returns to our pages with a review of the latest album by Siegewyrm from Buffalo, NY.)

As DGR has started divulging at the start of his reviews, sometimes you come across bands in the most random of ways. Case in point for my discovery of Siegewyrm:

Mechina, whom I love dearly not only in real life (purely platonic, musically I’m talking here!), but also happen to ‘like’ in my parallel online existence on Facebook, posted a link to a feature at The Monolith that included their new release Xenon. And while my saner self pondered whether I could really handle a “best of January” list given my post-end-of-year listmania hangover, my sneaky music-oholic self had already clicked through to said list and begun imbibing all it had to offer, whereupon I stumbled across Siegewyrm’s Harvest Begins.

According to Metal Archives, these chaps from Buffalo, NY started off as “Siege A.D.” circa 2007, releasing one album under that moniker before adopting “Siegewyrm” as their call to musical arms, with two albums Legends of the Oathsworn (2012) and Harvest Begins (2014) now under their belt.

Style-wise, Siegewyrm make use of a fairly conventional metal palette – apart from the occasional synth, electronica, or vocal effect, the standard metal ensemble of guitars, drums, bass, and heavy vocals make up their sound. One of the first comparisons that came to my mind was Mencea, a Greek band I’ve raved about here before, in that both take a fairly traditional metal sound but throw in enough variety and turns to keep things interesting. But there the similarities end.

While Mencea go for sci-fi and horror-influenced themes, Siegewyrm traverse classic metal territory of deals with the devil, fantastical tales, the afterlife, and subject matter more reminiscent of Iron Maiden and their kin. The album opener “Dawn of the 13th Day”, with its acoustic intro sounding like a medieval lute and flute tune, does well to act as a harbinger of what kind of things are to come across the rest of the album’s 12 tracks.

One aspect I’ve come to admire in the album with repeated listens is –shock, horror! – the clean vocals, which in my mind find a sweet spot in between hitting the notes but retaining enough of a raspy edge to give the delivery just that bit extra.

I’ll be the first to admit the album has its weaker moments, including unexpected flurries of rap on “Rage”, and a few tracks that lack the same intensity as others, but then again an album of “all killer no filler” is difficult for even the most accomplished of bands to pull off. Overall I think each track retains enough momentum to stave off the desire to skip ahead, and in addition Siegewyrm have done well in that coveted artform that really makes an “album” – the flow of tracks, which weaves things together to create more than just a collection of songs. The tracks that seem slightly weaker to my ears have all been sandwiched in between strings of stronger songs, helping to gel the music into one coherent listening experience.

The aforementioned “Dawn Of The 13th Day” makes on obvious album opener, leading into “Praying For Forgiveness” and the title track “Harvest Begins”. A triplet of tracks — “Devils Dance”, “The Thornwood Shoreline”, and “Reckless Abandon” — feel to me like a real unit that forms the album’s core, and the album closer “To the Foundry Of Souls”, with synthesized choral vocals and more ethereal moments, makes a natural album closer.

Occasionally on Bandcamp I come across an album where the “default track” that plays on visiting an album page leaves me scratching my head, wondering why the band chose to highlight that particular song to showcase their talents. But with Harvest Begins I think Siegewyrm have nailed it with the 6th track “Devils Dance”, with its slightly esoteric melodies, head-bobbing tempo, and solid heavy vocal performance leaving the mouth watering for more.

Will this album feature on many end-of-year lists come December? I imagine not, since with only a few registered buyers on Bandcamp and 1,000+ followers on Facebook it seems like they’ll fly under too many radars for that to be possible, even if they’d just released an album that fully slayed all prior expectations. I also don’t imagine they’ll be found on anything like Andy Synn’s “Critical Top 10” as embodying the very best of the year in metal, as I don’t think the band themselves would claim they’re pushing boundaries or redefining genres.

But what you will get with Siegewyrm is a solid “traditional metal album” with a touch of diversity; familiar yet novel. And for me Harvest Begins will likely appear on my personal end-of-year list by virtue of being a great “meat and potatoes” / “bread and butter” album that I can throw on, let run, and bathe in some sweet metal tunes.