As previously reported, Vancouver’s Auroch have a new album named Taman Shud that will be released on June 24 by Profound Lore, with vinyl coming via Dark Descent. I’ve been very high on this band based on their past efforts, and the new song that debuted yesterday is a strong sign that Taman Shud will be a worthy successor. “Noxious Plume” is the name of this ode to all things poisonous and wantonly destructive.

I suspect that when most people hear the phrase “tech death”, they think of super-fast blizzards of notes and beats, accompanied by a voice that roars like a bear and/or barks like a rabid dog. But of course “technical” instrumental performances have been a part of death metal since the beginning and still appear in corners of the genre that no one would think of calling “tech death”.

Auroch’s new song, for example, is fueled by technically demanding performances and often flies like a rocket, but it’s so vicious, so voracious, so malignant, malevolent, and murky in its atmosphere, that I’d never slap it with a “tech death” label. Plus, I suspect they’d try to shiv me if I did. Listen below and see what I mean. 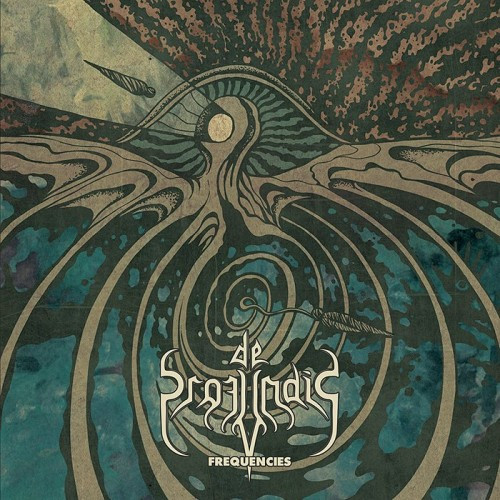 London’s De Profundis made their first appearance in our pages when Andy Synn reviewed their third album back in mid-2012, praising them as “a consciously complex band” who accent their music “with hints of Emperor’s promethean grandeur, Death’s inhuman technical flow, and Opeth’s blackwater dynamics.” Now, the band have completed work on an EP entitled Frequencies, which will be due out later this year, and today they began streaming the opening track, “A Strange Awakening”.

Much of what Andy wrote about the last album still holds true. The music on the new song is complex and inventive, unpredictable in its rhythmic changes, eye-popping in its acrobatic fret- and drum-work, and mesmerizing in its use of fleeting but arresting melodies.

Regarding the discussion above about the label “tech death”, I wouldn’t brand this song that way either. It seems more genuinely “progressive” — while also being plenty deathly.

“[I]t grabbed my interest within the first 10 seconds. And by the time it really began to roll 30 seconds later, I was hooked. There’s no doubt that this is black metal with lots of bite, but not the kind that depends heavily on drum blasting and knife-edged whirlwinds of tremolo guitar. Depending on where you are in the song, it includes rock beats, industrial rhythms, progressive guitar parts, a head-spinning solo, and ominous, pounding riffs.”

It’s the kind of song that gets the adrenaline pumping fast, but is so infectious that you’ll want to re-play it right away. And on the subject of technical instrumentation, Crest of Darkness is no slouch in that department either. Watch and listen below.

8 Responses to “NEW NASTINESS FROM AUROCH, DE PROFUNDIS, AND CREST OF DARKNESS”