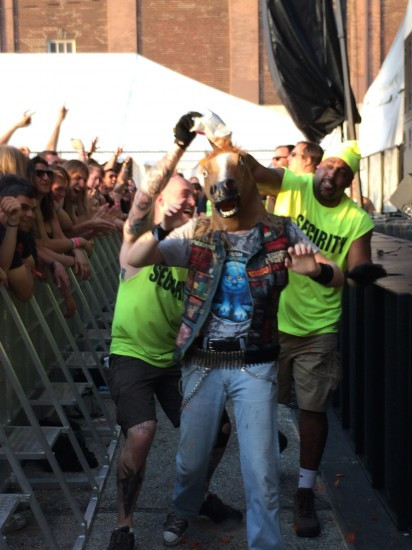 photo by Kusha of Theories

One of the most striking aspects of Maryland Deathfest XII was something that hit me even harder after I returned home to Seattle: As one of my new MDF acquaintances put it on Facebook today, it was a place “where EVERYTHING in totality, literally, everything in a 360 degree view, was ‘metal’ oriented in some way or another.”

You get that feeling at just about any metal show, but it’s a feeling that usually only lasts a handful of hours and then you’re back in the world. At MDF, it went on for days. Everywhere you looked, at almost all hours of the days and nights, even on the streets of Baltimore, you saw and heard the sights and sounds of metal. And especially at the Edison Lot, it was like being transported to another planet populated solely by metalheads. I’ve never seen so much black (or so many patches) in one place in my life.

People-watching was definitely one of the primary MDF spectator sports, second only to watching the bands on stage. Given that this was like a metal homecoming party (or, as Kim Kelly put it, “metal’s version of Spring Break”), lots of people obviously put a lot of thought and care into their selection of finery — including the dude in the horse-head mask pictured above, just after he had successfully crowd-surfed over the barricade at Edison Lot’s Stage A.  And of course the official mascot of MDF, Chicken Man: 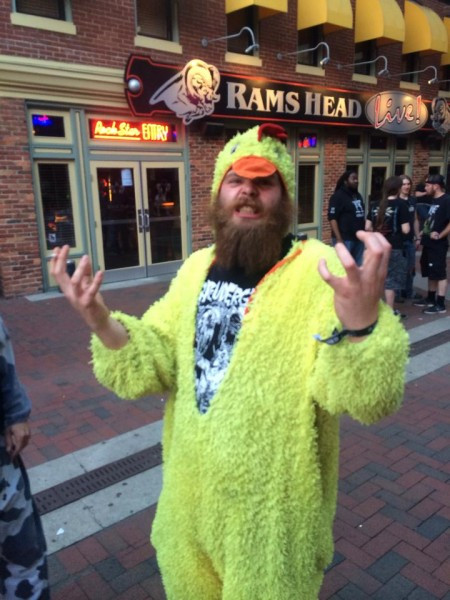 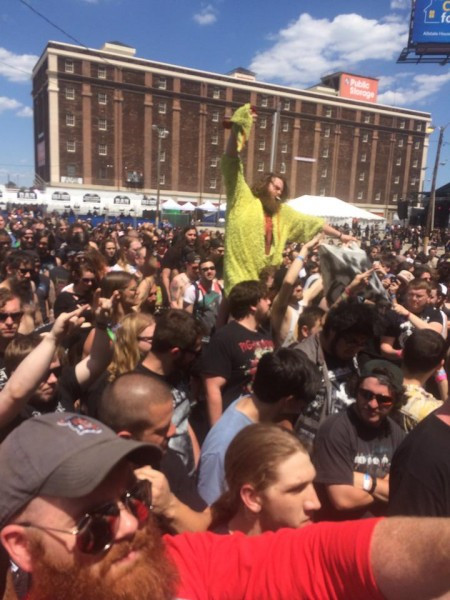 I saw Chicken Man every day at almost every venue, beginning with the pre-fest show on Wednesday night at Ottobar, and he was always fully costumed and usually right in the middle of the pit action. I’ve heard he has been a fixture at MDF for a long time. That suit must be smelling pretty rank by now.

I heard about but did not see Chicken Man’s “Hippie Killer” sign at Bongripper’s set on Sunday afternoon. High-larious. 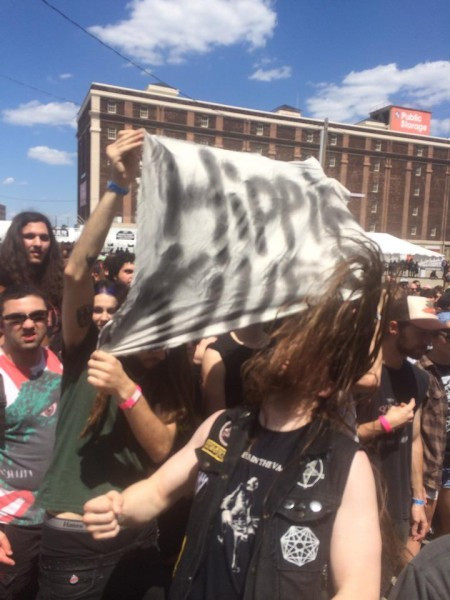 And then there was this dude: 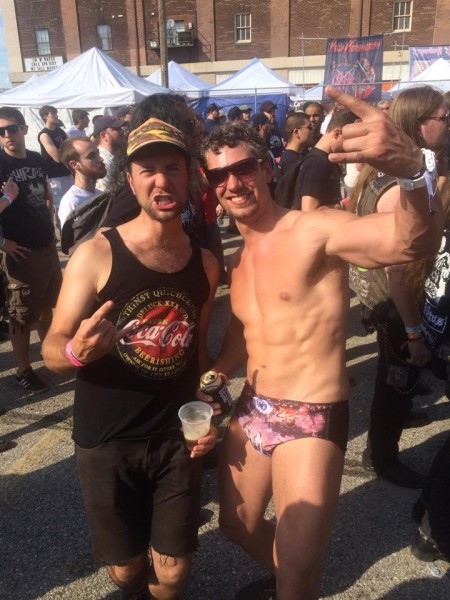 He was there every day at the Edison Lot in his metal speedos adorned with the cover of Death’s Symbolic album. I feel blessed that I was never behind him when he bent over for a solid headbang.

But perhaps my favorite piece of attire was the flowery lemon yellow Hawaiian shirt with an enormous Entombed patch right on the back that I spotted at Edison Lot on Saurday. Wish I had a photo of that bit of inspired madness.  Update: Thanks to my hero Brooks Rocco of The Five Eyes, I now have a photo of this awesome shirt (cool hat too — as my friend Brutalitopia Jack said, LG Petrov would approve): 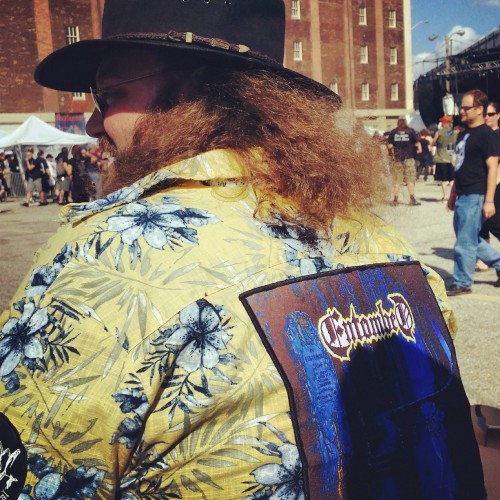 Now take another look at the photo at the top of this post and you’ll see an example of something else I forgot to mention in yesterday’s observations about the superb logistics of the the events at Edison Lot: security dudes having a shitload of fun.

I don’t know where the festival organizers sourced their security service, but I’m guessing many of them had never been at anything like MDF XII — because who has? And yet I’ve never seen a less grim, less intimidating, less “trigger happy” group of security guys at any metal-related event. Whoever trained them for this thing did the job well. In addition to the fact that many of them were smiling and rocking out to the music along with the crowds, they seemed to have a. . . genuinely helpful attitude. [Update: I’ve now learned through reader comments that the MDF stage guys work at Ottobar and have been a mainstay at MDF for a while — big props to those guys.]

When crowd-surfers would be passed up to the barricades, the security guys would cradle them in their arms like newborns and lower them gently to the ground, usually with a smile and a pat on the back. I heard stories of some ugly incidents involving gate security at previous MDFs, but I never saw anything remotely like that at this installment, at any of the venues.

Granted, I wasn’t closely surveilling the security apparatus, and maybe there was some unpleasantness somewhere, at some time, but from what I saw, it was really well-done. 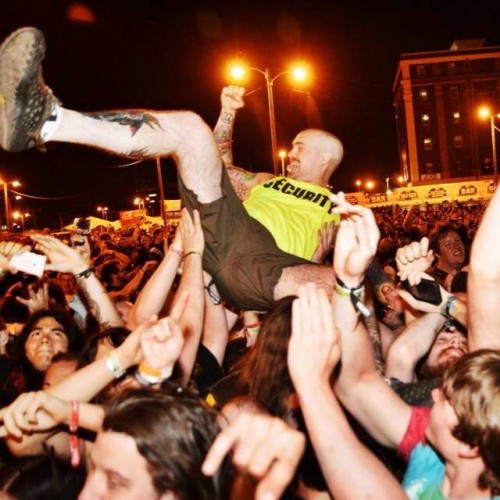 Yesterday I wrote about the Edison Lot, and I thought I’d close this part of my travelogue with some observations about one of the other festival venues — and then pick this up again tomorrow.

Edison was of course the biggest setting. The smallest was a place I never managed to get to — the Sidebar. That was the place where dozens of metal bands were putting on free shows throughout the long weekend. It was described to me as something like a basement show, with a tiny space that was densely packed with bodies.

Apart from Sidebar, Soundstage was the smallest of the three venues where you needed a ticket to get in. But it was still a pretty large place with an elevated area opposite the stage and a big floor. Soundstage was where most of the crust, hardcore, and grind bands played, in addition to bands from other genres.

Unfortunately for me, the sets at Soundstage were happening at the same times as the shows at Edison Lot and Ram’s Head Live (the third venue, which I’ll discuss tomorrow). I had to make some tough choices, and I wound up missing a lot of what went on there — including performances by Black Breath, Enabler, Noothgrush, Maruta, Kill the Client, ACxDC, Cripple Bastards, and Impaled, just to name a few who I really wanted to see. 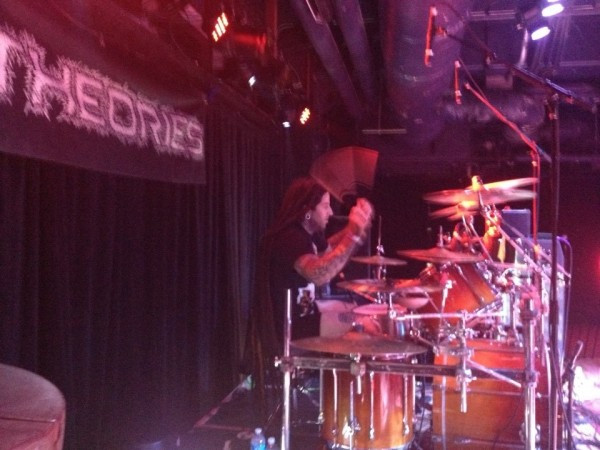 I did see the performance by Seattle’s Theories, which was goddamned obliterating. Those four dudes (some of whom I knew slightly before this trip and got to know better during our time at MDF) were all firing on all cylinders, delivering a blast-furnace explosion of death/grind that I thought was electrifying — heavy as hell, brutally groovy, and thoroughly venomous.

I also caught the performance by the UK’s Extinction of Mankind. I particularly wanted to see that show because the band’s guitarist is Scoot, who is also the bassist for one of my favorite death metal bands, Vallenfyre. Man, that set left me feeling like someone had jammed a lightning rod into my brain stem and turned on all the juice — one hard-hitting dose of crust punk after another, with frontman STE yelling and barking in a raw, skin-abrading voice that made me hoarse just listening to him.

I was fortunate enough to meet those two after their show, and to hear STE’s hilarious stories about his exchanges with the tight-assed American woman he was pinned next to on the flight over from England. Somehow, she took it the wrong way when he called her “flower”.

One other thing about Soundstage — though that place was the smallest of the three MDF venues, it had some of the biggest and most energetic pits I saw during the whole festival. I wish I could have cloned myself and caught more of what went down there.

(More babbling about MDF tomorrow and the next day.  For previous babbling, Part 1 is here and Part 2 is here.)