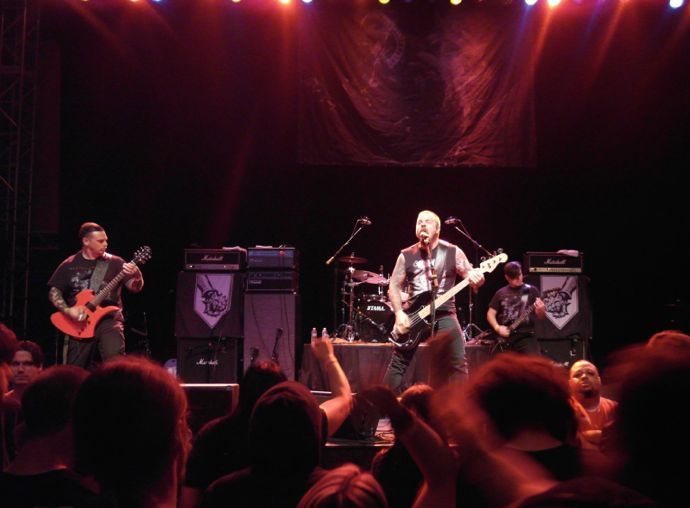 So far I’ve written about two of the venues at Maryland Deathfest XII – The Edison Lot and Soundstage. Today I’ll cover two more and begin discussing more of the bands who provided, for me, the musical highlights of the four-day event.

My two Seattle friends and I arrived in Baltimore in the early evening of last Wednesday after a long cross-country flight to D.C. and then a numbing crawl through rush-hour traffic from there to Baltimore. It was a steady 20 miles per hour all the way, except for the times when it wasn’t moving at all and about 10 minutes when we accelerated all the way up to a blistering 40 mph.

We hooked up with my NCS comrade BadWolf at the hotel (he had driven all the way from Toledo), and since all of us were feeling hungry and sort of beat to shit, we had some food and drinks at the hotel after checking in and before making our way to the Ottobar for the pre-fest show on Wednesday night.

That proved to be so relaxing and enjoyable that we blanked on the time and didn’t get to Ottobar until after the first two bands – Noisem and Black Breath — had finished their sets. But we did get there in time to catch Misery Index and Immolation.

Ottobar is a cool place, with a separate bar area, a fairly small floor in front of the stage, and a balcony along one side of the music room with tables and benches along the rail looking down toward the stage. The fact that we were able to see bands the caliber of Misery Index and Immolation in a cozy club setting was a mind-blowing way to start MDF XII.

Both bands were on fire, playing a mix of newer and older material to a packed house with tremendous power and precision. My dominant memories of that night, apart from the head-wrecking energy of the music, were of Adam Jarvis’ machine-like drum performance, Ross Dolan’s hair (calf-length and ridiculously luxuriant), and Robert Vigna’s extravagant picking motions as he churned out those patented (and thoroughly evil) Immolation riffs and leads.

(I intentionally didn’t bring my camera to any of the events until the final day, so I have no pics of the Ottobar show.)

On the next day (Thursday), all of the music was at Ram’s Head Live and the first band wasn’t scheduled to start until 7 p.m. Ram’s Head is located in a complex called Power Plant Live, a U-shaped array of bars, clubs, and restaurants (several with outdoor seating) built around a big open-air plaza. It’s about a 15-minute walk from the Edison Lot.

On weekends, you have to pay a cover charge to get inside the complex (which MDF ticket holders could avoid by entering Rams Head through the street side of the building instead of the side that faced into the plaza). But on that Thursday night, entry to the plaza was free, and that provided a weird sight all during the evening.

It was like the interaction of two different species. On the one hand, there were clusters of black-clad metalheads outside in the plaza area between (or during) the MDF sets, and on the other hand there were crowds of people you’d expect to see at dance clubs, most of whom were staring at the invaders with a mixture of puzzlement and anxiety.  (Fringe benefit: a go-go dancer from the Howl at the Moon club who came outside wearing leather chaps and a bikini and danced on one of the outdoor tables. If she had slapped some pentagram stickers on those chaps, she would have fit right in at Edison Lot.)

I really liked the Rams Head venue. It had a big stage with excellent lighting, as well as a balcony area with seating, but although the place has a capacity of about 1,500, it didn’t seem at all cavernous and it was easy to get a good view of the stage from just about anywhere.

I spent parts of all four MDF days at Ram’s Head. There was some overlap with the nighttime shows at Edison Lot on Friday-Sunday, but for the most part Rams Head kicked into gear just as the last band at Edison was finishing each night. I’m not going to try to write about all the bands I saw there, but I will mention some of those who turned in highlight-reel performances:

Australia’s Whitehorse was the second band to play on Thursday night — slow, sludgy, droning doom with vast, drifting melodies. I got a kick watching their frontman Pete (who I met a couple of days later). He is the owner of one of the most bushy, extravagant beards I’ve ever seen, which contrasted with his shaved dome. During the long stretches where the rest of the band did their thing without vocals, he stood in place, slowly moving back and forth while scanning the audience from side to side with a steely stare until the time came for him to utter gargantuan, cavernous roars and hair-raising shrieks.

Sourvein followed Whitehorse on the first night, and they put a charge in the place with a load of more up-tempo riff-heavy sludge/doom that got heads moving. I also enjoyed watching their frontman T-Roy. He paced the stage like a big caged cat and cut the crowd with knife-edged caustic snarls. (Met him, too, and he was a super-laid-back, very friendly guy.)

But the first night really belonged to Japan’s Coffins. They completely blew me away, and it was pretty apparent that they had the same effect on just about everyone else at Ram’s Head. I was expecting more doom-oriented death metal, and though they did have some slow, putrid crawls in the music, it was mainly up-tempo and thoroughly electrifying, with more death/punk in their vibe than doom. Their rail-thin frontman rocked the mic stand like a latter-day Joey Ramone, and the guitarist (who looks more like  a high-school math teacher than a metal musician) proved adept at a variety of guitar styles. All four of them killed it.

Coffins proved to be so popular that within about a minute their merch table was mobbed by a big crowd. The vocalist came out, still mopping sweat off his head with a towel and sold about a jillion t-shirts over the next half hour, methodically folding each one before shaking the buyers’ hands with a smile and turning them over.

They’ve only got about 6 or 7 songs in their total recorded output, and they didn’t even play all of them, but they closed with “Entranced By the Wolfshook” and I just about lost my shit. By that point they had already pretty much destroyed the place, and that song just pounded the rubble into smaller fragments. Unfortunately, I didn’t get to watch the duo as closely as I would have liked because a violent pit opened up right in front of me and I had to spare some attention to the moshing maniacs so as to avoid being flattened.

The guitarist/vocalist ran his guitar through three different amps and used a huge pedal board, and the payoff was an amazing array of guitar tones to complement the strange permutations on death metal that this band has been creating in a way that really doesn’t sound much like anyone else. A great show.

The next time I saw Bölzer’s frontman was in the crowd at Diocletian’s Ram’s Head show on Sunday night (replacing the missing Mitochondrion). He was right up front, leaning on the stage with teeth bared and banging his head like a crazy man. I was doing the same thing about 6 feet back.

New Zealand’s Diocletian gets my vote for the most sonically destructive band I saw during the four nights at Ram’s Head. They played really fuckin’ loud, with no significant breaks, all the songs sort of running together to form one continuous thermonuclear assault of blackened death metal.

I have a few more Rams Head bands I want to mention, but my fuckin’ day job is demanding my attention, so I’ll save those until tomorrow, when I’ll also begin discussing the best music I heard at Edison Lot.

I missed a lot of the bands who played at Rams Head, sometimes because I was at a different venue when they played and sometimes because I was outside the venue decompressing from the non-stop sonic onslaught and shooting the shit with friends. These are the ones I failed to see, in case you’re wondering why I’m not going to be mentioning them:

It especially hurt to miss Ulcerate, because I also missed them when they were in Seattle a few weeks ago.