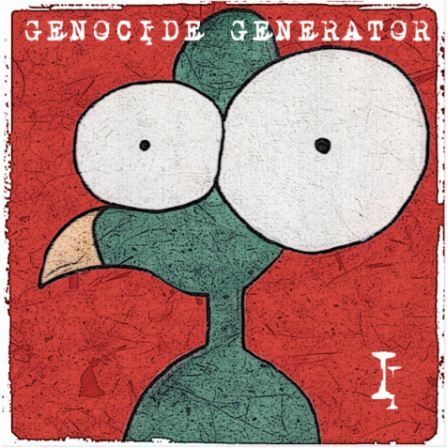 (DGR wrote this review of the debut album by Germany’s Genocide Generator.)

Late last year I went on a bit of a grind kick and found myself exploring a wide variety of bands — a huge chunk of which I eventually reviewed here at NCS. I was not, however, finding them through the usual channels. Instead, I was discovering them through links posted by other bands whose music I was initially listening to — and that’s how I recently discovered Germany’s Genocide Generator.

Distaste were one of the bands whose music I reviewed late last year, and since then I’ve been keeping an eye on the band as well as its various members’ other projects, just to get some idea of what they’ve been up to — as well as catching the occasional really good recommendation. A surveillance practice like this really lends itself to the discovery of very good bands from groups’ local scenes, ones that may not be covered too often in the metal website world. For instance, Mastic Scum (reviewed here) was one of those recommendations from Distaste.

Since then though, I’ve found myself traveling through concentric circles on Facebook via a variety of bands and recently found myself doing so with Distaste once again — with supplemental help from Metal-Archives to get an idea about the bands I was clicking on and looking at. 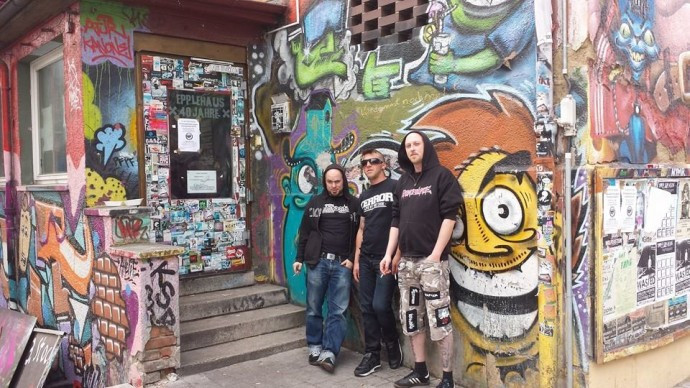 Genocide Generator are one of those bands I found in this way, a group who had released an album in 2013 and described themselves as “Grindustrial” — a portmanteau of grind and industrial. The concept itself isn’t that new — a couple of other bands have incorporated those elements as well — but it is something that I always want to hear. I’ve found that even beyond the basic instrumentation being on the unholy loud as fuck side of the spectrum, an electronic element can really lend itself to inflicting pain on the listeners and make the whole thing an absolutely ferocious experience.

That’s how we find ourselves where we’re at today, with the amazing cover art for Genocide Generator’s I emblazoned on the front page — an album in which every track name is just a number, but not one that corresponds with its track position on the disc because “Haha, Fuck you”, and frankly, I’m pissed I missed this album when it came out last year.

If there is one thing you should know going in right away with Genocide Generator, it is that their music runs in a very similar vein as the block of musicians that they circle with. In this case, that group comprises bands such as Afgrund, Distaste, Godhatecode, and Underground Groove Front — bands who believe that grind is played at one speed and should be as crunchy as possible. It very much feels like this group is born out of a specific scene located in a corner of Austria and Germany and it is one that I rather enjoy.

The album rolls by in twenty-something minutes, filled to the brim with blasts, guitars, nigh unintelligible vocals, and various electronic samples that blur in and blur out so quick you rarely get a chance to notice them. The whole experience is a cyclone of noise, though not as intense on the electronics side as a promise of ‘grindustrial’ would hint at. The group definitely have the whirs and there are a couple of really sharp samples that cut their way through the already biting guitar work, but most of Genocide Generator’s first disc is a hefty chunk of grind metal, very much in line with the previously mentioned circle of musicians, just as intense and violent. 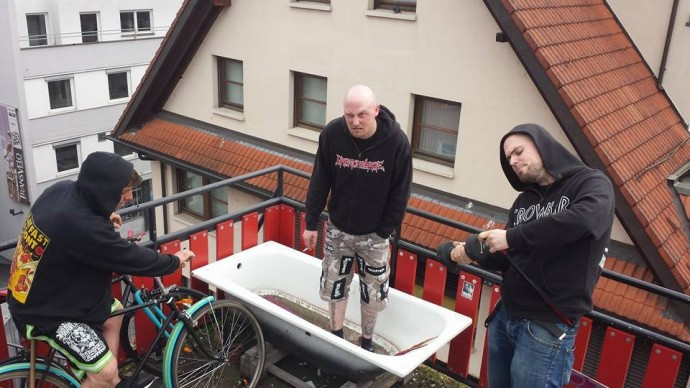 The musician H., who provides much of the vocals on the disc, veers through a variety of different styles like a drunk driver swerving across the highway. He goes from high, to super-low, to animal noises, and everything that runs the gamut in between. He’s probably the most manic-feeling vocalist I’ve heard in some time and he’s backed by an assault from drummer Lukas Haidinger and guitarist Hans Brunhuber.

Hans also serves up a pretty heavy dose of guitar work on the disc as the group jumps from song to song, each tune containing enough individuality so as not to blur. He’s got a heavy grip on various grind riffs, and many of them feel like machinery clicking into place. He’s accented by a variety of different electronic samples provided by an artist named sparswasser, but they mostly build up the wall of sound that he and Lukas are hammering forward.

I is an uncompromising album and a good shot at building a foundation for the band. While not quite as industrial as the band hint at, they still manage to bring much of the DIY Ethic, the sort of fuck-you mentality, and a grip on the songwriting furnace that spits out the hot chunks of metal the define their circle of music. It’s an exciting, quick hit to the system that levels the listener like a tornado, then spins around and does it again and again in twenty-three minutes.

The crashing intro track “7” should feel super-familiar to anyone who has experience with the Distaste disc from last year, as it too has a heavy, crashing groove, but after that the songs are lightspeed-fast and meditate on absolutely nothing. It’s just a humongous wave of screaming, guitars, drums, and electronics pulsating through the whole thing.

Genocide Generator have huge potential, and I think the industrial side could be cranked up to be even more violent, to the point of inflicting pain. The rest of the band put on such a ferocious show that all they need to do is crank up the electronics side a bit to match the abrasiveness of the rest of the group’s sound — to match the feeling of having your face held to a knife-sharpening wheel — and they could make a huge, ugly impact, as well as establish a unique take on the current grind formula.

I is currently available at name-your-own-price on Bandcamp and I absolutely recommend it, as well as the other bands that Genocide Generator’s musicians are also part of. You could kill a pretty good chunk of a weekend just having your skin blasted off by that huge circle of bands.

6 Responses to “GENOCIDE GENERATOR: “I””