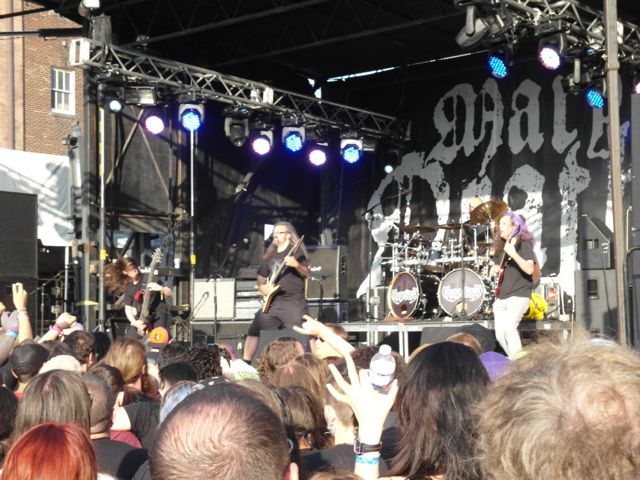 I’ve been reliving my experience at Maryland Deathfest XII through these “travelogue” posts. Maybe “extending my experience” would be a better way to say it, because I really didn’t want it to end and still don’t. But I need to move back to what I usually do at the site (as soon as I remember what that is), and so this will be the final installment.

When I left off yesterday I was in the middle of giving a round of applause to the bands I saw at the Rams Head venue during the course of MDF who made the biggest impact on me. To be clear, I enjoyed the performances of every band I heard at MDF, but the ones I’ve mentioned in these posts were the highlights. I’ll wrap up my thoughts about the performances at Rams Head next, and then turn to the bands who were at Edison Lot.

Saturday night after Bölzer finished their set and I finished waiting in line at their merch table to throw money at them, I caught the last half of the set by Finland’s Hooded Menace, a band I like a lot. They were hooded and they were menacing, boulder-sized doom chords falling down like slow rain (if it were raining boulders) and bleak (but entrancing) guitar melodies rising up like graveyard mist.

Asphyx closed out Saturday night at Rams Head, and man were they good. It was a thrill to see Martin van Drunen for the first time and to hear so many songs performed live that over time had buried themselves in my brain from their recordings. I was standing near the bar while I listened to them, and about 5 feet to my left, there was At the Gates’ Tompa Lindberg headbanging to Asphyx, too.

I’ve previously mentioned the thermonuclear assault of Diocletian at Rams Head on Sunday night, but in addition to having my guts liquified by them, I also received a serious beating from Mutilation Rites — visceral, ravaging black metal that made a good impression.

I was also impressed by the efforts of the Mutilation Rites bass player and the drummer to set the record for projectile loogie hawking (that would be the indoor record, no wind assist), as they both periodically launched arcing gobs of spit into the air. Only problem was they were spitting into the first few rows of the crowd. I think my attitude toward their music would have changed if I’d caught one of those in the face. 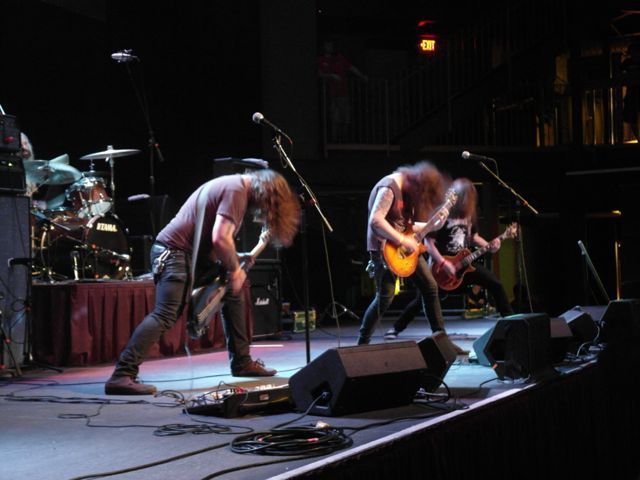 I spent more time at Edison Lot than at any other MDF venue, and this memoir would grow to book-length proportions if I tried to call out and describe every exciting performance I saw there — so I won’t. These were the highlights for me:

Sólstafir: I was such a huge fan before seeing them live for the first time that they could have done nothing but stand up there belching and passing wind and I probably would have loved it. But of course they did much more than that — one of my favorite sets of the festival. Also, they remain the coolest looking band in metaldom.

At the Gates: I had intended to leave after a few songs to catch another band at Ram’s Head (in part because I saw AtG on their last US tour), but I’m so glad I didn’t.  It was a long set and included songs from across their discography, starting with “Suicide Nation” and finishing with the one-two punch of “Blinded By Fear” and “Kingdom Gone”. Amazing performance.

God Macabre: God Macabre have recorded one album (The Winterlong). It’s now more than 20 years old, but it’s a classic, foundational work in the history of Swedish death metal. It’s being reissued next month by Relapse in remastered form, with some bonus tracks. I had to see what they were capable of doing live, especially now that their line-up includes two new members  — Mordbrand’s Björn Larsson (bass) and Torture Division’s Tobias Gustafsson. The verdict? They fucking killed it. Great songs, great performances, they messed up my neck bad, and they seemed to really thrive off the enthusiastic crowd response they got.

Inquisition: I saw this duo for the first time not long ago in Seattle on the Metal Alliance Tour and had so much fun that I made sure to see them again at MDF. They sounded even better. I don’t think they said a word while on stage, but their music was riveting, and I’ve now grown thoroughly accustomed to Dagon’s strange throat-singing vocal style. I wouldn’t change it at all.

Uncle Acid & The Deadbeats: I really didn’t see this one coming. I liked the band’s Mind Control album but haven’t heard much else by them, and I wasn’t sure how their sound would go over in a big festival setting dominated by more extreme acts. But they drew an enormous crowd and they turned out to be much heavier than I was expecting. Really good vocal and guitar harmonies, too. Very impressive and a whole lotta fun. 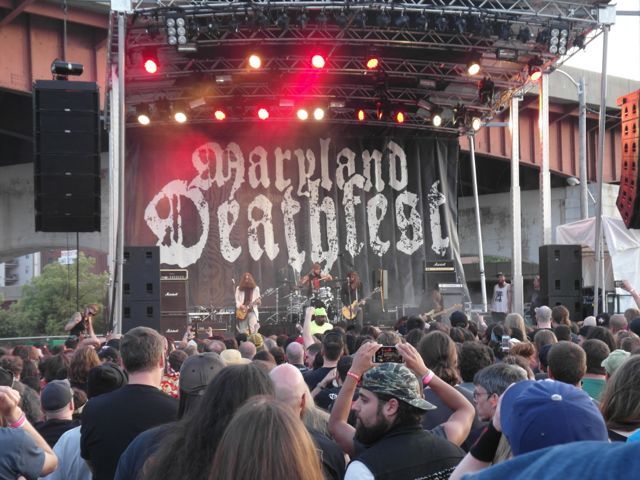 Gorguts: I saved this band for last, because if someone put a gun to my head and forced me to pick one band who turned in the best set I saw among so many great ones, I would have to pick Gorguts. On a technical level, the instrumental performances were all amazing and completely locked in (e.g., on “Obscura”, Luc Lemay, Colin Marston, and Kevin Hufnagel were all doing strange things to their instruments high up on the fretboards that I’m pretty sure is illegal in most Southern states). Luc Lemay’s voice also sounded truly bestial — except when he was flashing megawatt smiles to the crowd (he really seemed overjoyed by the whole experience).

Part of what put their set over the top was the decision to play not only songs from Colored Sands but also tracks from across the band’s discography, including some really scathing early material. I thought their show was fantastic. 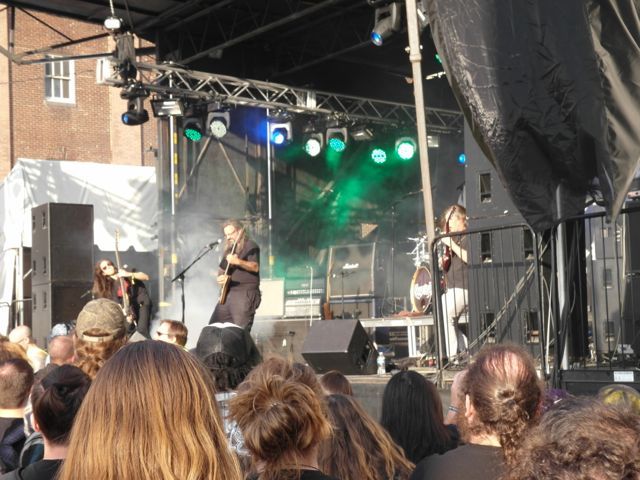 I more or less missed a lot of bands at Edison Lot over the three days there, in part because I was at other venues, in part because I was yacking with friends instead of paying attention to the music, and in part because my friends and I got late starts a few days and missed the opening acts. Here’s a list of the bands I didn’t see (even though I heard many of them in the background while I was socializing). It’s a sign of how good MDF XII was that the bands I missed would make one hell of a festival all by themselves.

And with that, I’m going to wrap up these reminiscences of a phenomenally good metal festival. It’s very hard for me to imagine how MDF could top this one next year, but whatever they do next, I will do my damnedest to be back in Baltimore when it happens.

To read previous installments of this travelogue, use the following links: