Except for that New York City event, Skeletonwitch will also be a part of this tour, which makes it doubly enticing. Sabaton will be on the tour as well. However, although Vallenfyre will be playing the Manhattan date in place of Skeletonwitch, Skeletonwitch and Evoken will be playing later that same night at St Vitus Bar in Brooklyn; that show is also part of the Decibel anniversary festivities. I would give your right arm to see that one.

Here are all the tour dates: 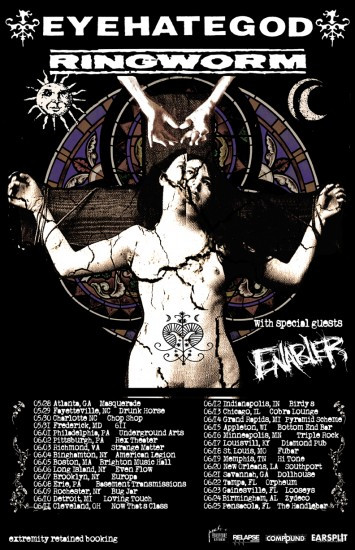 Two days ago NOLA’s Eyehategod began a month-long US tour in the wake of their new album release, which just happened yesterday in North America. For my money, this is one of those tours where the support acts justify attending regardless of who is at the head of the ticket — because the supporting bands are Ringworm and Enabler.

I missed Enabler’s set at MDF, but my brother BadWolf did not, since he is deeply in lust with Enabler’s new album as well as the band’s bass player.  He said they destroyed.

These are the dates: 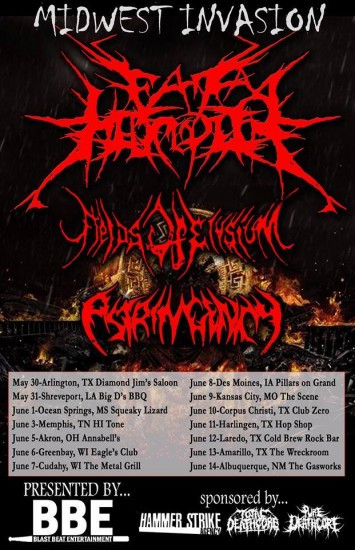 (Austin Weber provides the introduction to the final tour of this post, along with some music.)

The future is robots, and further loss of humanity and civilized behavior. If you want a glimpse of what’s to come, make sure to witness Fields Of Elysium this summer on tour. I have previously discussed their 2012 EP, Capax Universi, here. But for those not in the know, these guys offer a mind-bending configuration of extreme deathgrind littered with jazz and exploding in insane tapping, hyper-rabid melodies, and swarming sweeps.

The storms they create are spawned from a desire to ratchet up the intensity over and over, then cool down to confuse you, and then re-fire the engine to a level twice as vitriolic and demented. This is death metal turned inside out, the sonic equivalent of being expelled from a blender, leaving you torn to pieces from grinding gears and blades that cut their targets with precision.

This is a mechanical entity crafted by capable humans. If they are playing anywhere near you, I suggest you go. Their Midwest Invasion tour begins this week, with their tourmates consisting of deathcore tyrants Eat A Helicopter and Astringency from Plainview, Texas.