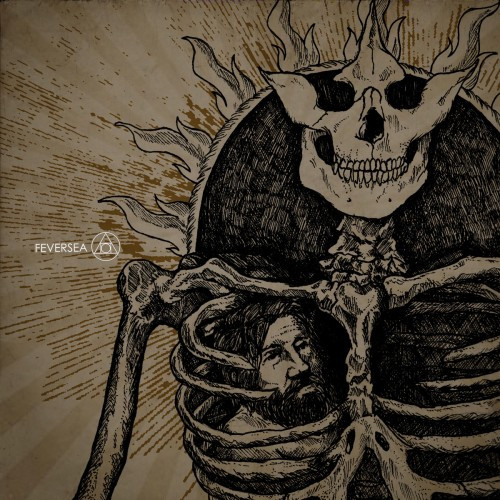 A band that I’ve been keeping a rather close eye on for a while now, Progressive/Post- Black Metal troupe Fever Sea, recently released their second, self-titled, EP for ‘Pay What You Want’ over on their Bandcamp page, and I thought it about time we covered this strangely compelling, always intriguing release here at NCS.

While the band’s previous EP The Deluge (reviewed by Islander here), still stands out as a phenomenal debut release by a band full of nascent, blackened promise, their self-titled EP somehow manages to be even better, weaving together moments of angular post-hardcore and atmospheric blackened sorcery into a seamless, multifaceted tapestry of light and shade.

“Circadian” kicks things off with a blizzard of storming anguish, a blackened whirlwind of feverish notes that derives its power not from blasphemy or brutality but from a sense of elemental force. Over the course of the next 4 and ¾ minutes the song twists and contorts itself in ever more enigmatic, unpredictable, yet never less than compelling, shapes, moving from a ferocious tumult of sound and fury to a more regimented, anxiety-driven march of stabbing riffs and pounding drums.

The sudden appearance of esoteric clean-sung prog melodies or an unusual, shred-worthy solo continues to shape and sharpen the band’s singular vision, with moments of gleaming calm and ambience providing both deep shadows and brilliant highlights amongst the writhing riffs and clattering, multi-limbed drumming.

The choppy, almost Poison The Well-style riff that begins “Squaring The Circle” throws a quick curveball at the listener, its edgy antagonism swiftly crumbling into an enigmatic procession of flowing post-rock melody and strange, celestial beauty, whose soft caress slowly builds towards an explosion of obsidian-tinged savagery. As the song progresses it sheds its skin many times, emerging from each new transformation as something new and wondrous, moving smoothly from gorgeous ambience to zealous intensity, all beneath a shroud of captivating melody and ghost-like atmosphere.

At nearly 8 minutes in length, “Tusk” is the song that allows the band to flex their progressive muscles furthest, providing them with both time and space to expand and explore the limits of this strange, esoteric sound they have conjured out of the ether. The opening bars of phantom ambience soon give way to a driving deluge of wrenching screams and taut, wiry riffage, backed by a seething torrent of precise, intricate drum work. The middle section of the track undergoes an unexpected, yet no less organic, transformation into something akin to Thrice and Wolves In The Throne Room engaged in a strenuous battle of wills, pitting off-kilter riffs and soaring, heartfelt melodies against a bleak and ominous undercurrent of barely restrained, elemental rage.

The final third of the song – if one were inclined to think of it in classic terms as Beginning, Middle, and End – is simply a fantastic culmination of all that has gone before it, introducing a wealth of searing, progressive riffs and complex, creative shifts in style and structure that never seem to derail the song’s unstoppable, unpredictable momentum.

Though this is an EP that will generally find itself tagged under, or at least adjacent to, the label of “Black Metal”, it could easily – and perhaps even more accurately – be simply referred to as “Progressive Metal” and I think we’d all be just as happy.

Though its roots are clearly driven deep in blackened soil, the creative use of atmosphere and ambience, combined with unusual elements of mutated post-hardcore and haunted, doom-laden melodies, means Fever Sea’s ultimate sound is one simultaneously abstract and aggressive, layered and complex, yet compellingly cathartic throughout.

It’s a melting pot of sounds and influences from across the metallic spectrum, refined down to their essential elements, and then, through some arcane alchemical process, transmuted into something utterly unique.

In lesser hands this strange concoction of competing influences and dissonant, often opposing, styles could spell disaster. But Fever Sea have the Midas touch – everything they create turns to gold.