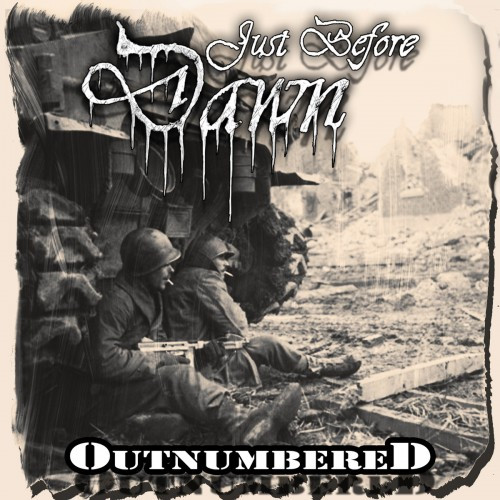 Earlier this month we featured a brand new song named “Counterbattery” from Sweden’s Just Before Dawn. It turns out that “Counterbattery” was just the first track on a two-song single that will be released later this summer on vinyl and cassette via Prowler Records, and a few days ago Just Before Dawn put the second track up on the web for streaming and free download.

The new song is named “Outnumbered”. Anders Biazzi once again wrote and performed the music (with Brynjar Helgetun on drums), and on this track the vocals were recorded by Rogga Johansson and Jonny Petterson.

Like everything else this project has delivered to date, the lyrical subject matter concerns warfare, in this instance the fate of an outnumbered unit of soldiers surrounded by the enemy in a ruined city, lying in wait for one last strike and a final grasp at redemption.

The music summons up the drama of that situation with staggeringly heavy riffs drenched in that Sunlight Studios sound that will put smiles on the faces of all true Swedish death metal addicts. The chugging, charging rhythm of the song will get your head moving, the eerie guitar solo is chilling, and the vocals are gargantuan.

Check out the song below, and I’m also including “Counterbattery” for those who missed it. The music is available via this Bandcamp link:

2 Responses to “JUST BEFORE DAWN: “OUTNUMBERED””