I’ve collected here new music from three bands. As suggested by the title of this post, the songs have something in common, though they are different in other respects: They all include certain instrumental elements that are very, very fast. Your hair may be singed. The skin on your face may bubble like a broiled fetus. You may void your bowels. I myself only experienced the last of these effects, but I thought it best to provide a complete set of warnings.

Damn, but I surely do love that album cover, don’t you? It’s a collaborative effort between Polish artist Tomasz Alen Kopera, whose work I’ve featured about a dozen times in the daily art posts on our Facebook page, and the band’s vocalist, Alex Hofmann. The album’s name is The Flesh Prevails and it’s due for release by Unique Leader on July 22.

What I heard yesterday was a new song named “Carved From Stone”. It’s an interesting song. Certain instrumental tracks are moving at about 1,000 mph. The kick drums eject shells at the rate of am M134 minigun, and the riffs whip like hurricane winds and pummel like a jackhammer. On the other hand, Mr. Hofmann growls his lyrics as if patiently telling a bedtime story, presumably to a brood of orcs. And the lead guitar carefully unspools an eerie atmospheric melody like a coil of razor wire.

The song has other strengths besides these attention-grabbing contrasts. For example, listen for what happens beginning at 1:40, 2:38, and 3:39. A damned compelling song. 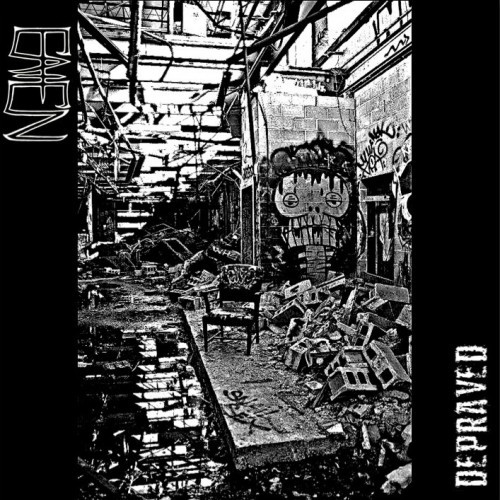 Eaten are a death/grind band from Massachusetts. Their debut EP, Depraved, was released in the U.S. earlier this year on cassette and is now being released on both limited-edition tape and as a digital download by the UK’s Kydoimos Records. It consists of 12 tracks that fly by in less than 12 minutes.

The flying isn’t non-stop. Periodically, the aircraft spirals into a slow, noxious descent before the afterburners kick in again. And when they do kick in, the music becomes an obliterating onslaught of gouging riffs, flame-spitting guitar leads, and blazing percussion. The vocalist barks and growls like a mastiff the size of a bull ox, and to further amp the filth quotient, the production sounds like someone poured a mixture of week-old coffee grounds and volcanic sand into the recording equipment.

The individual tracks aren’t long, but each one stands out — these dudes are masterful at creating monstrously distinctive songs in the blink of an eye.

As noted, Depraved is a “name your own price” download at Bandcamp and it’s also available on a limited edition of 35 cassettes (the purchase of which gives you an automatic download of the digital files). Listen below (but duck and cover first). 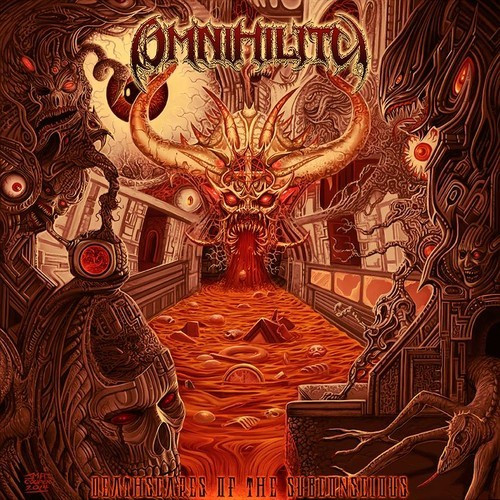 I really enjoyed this Eugene, Oregon band’s debut album, Biogenesis (discussed here). And so I was eager to hear something from their second full-length, Deathscapes of the Subconscious. I actually do have the album sitting in my queue of promos, but because that queue is now long enough to encircle the globe, the occasion for my first taste was yesterday’s public premiere of the album’s first track, “Molecular Resurrection”.

“Molecular Resurrection” is remorselessly brutal and head-battering, but super-charged by radioactive fuel. The fret- and pick-hands flash in a bleeding-edge blur, the drummer delivers a tightly controlled and riveting performance (also well into the bpm red zone), and good lord, the vocalist goes from the gruesome depths into eardrum-rupturing shrieks in a nanosecond. This already sounds like a step up from Biogenesis.

But the song isn’t just an eye-popping display of technical skill and a refined taste for trauma, it’s a dynamic piece of music with a slithering melody that actually proves to be insidiously memorable.

Deathscapes Of The Subconscious will be released via Unique Leader Records on July 22 and it’s available for pre-order now at this location. Also, did I mention that the album cover art is just fantastic? Well, it is — and it’s by the masterful Mark Cooper.

4 Responses to “MUSIC FROM THE BLISTERING EDGE: FALLUJAH, EATEN, OMNIHILITY”