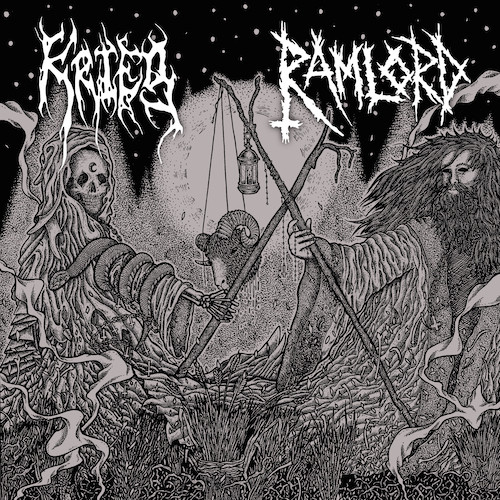 On July 15, Unholy Anarchy Records will release a four-song split by Krieg and Ramlord, and today we’re delighted to premiere one of Krieg’s two tracks, “Worthless Nothing” — a cover of a song from the 1993 LP The Greatest Invention by the seminal UK crust band Doom.

As I wrote in my recent review of this excellent split, Krieg’s decision to cover this particular song makes perfect sense in the context of this release. It’s a natural pairing with both Krieg’s other song, an original composition named “Mocking Dead Empires”, and the blackened crust-punk assaults mounted by Ramlord. “Worthless Nothing” drives hard and fast, propelled by a combination of virally infectious jumping riffs and doused in acid by one of the best voices in US black metal.

Krieg long ago cemented its place as one of the cornerstone bands of black metal in the U.S. After two decades in the trenches, Krieg has nothing left to prove — but the creative fires are obviously still burning hot and bright. Listening to Krieg turn back the clock to the spawning grounds of crust while putting the band’s own vicious stamp on the sound is proof of that, and it’s also an enticing tease for the Krieg full-length (Transient) that’s expected later this year.

Without further ado, here’s the premiere of “Worthless Nothing”.

6 Responses to “AN NCS PREMIERE: KRIEG — “WORTHLESS NOTHING””