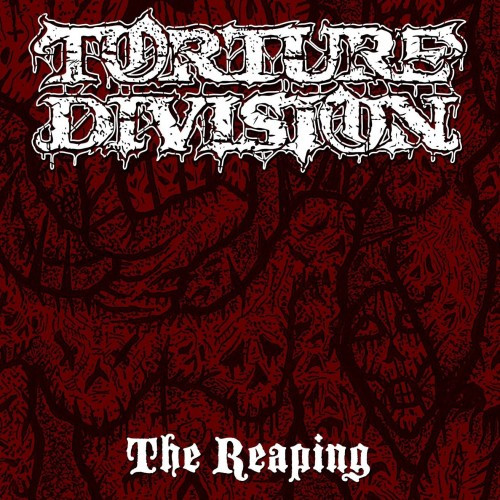 Well, this is a damned fine way to end the damned work week — with the release of yet another free demo by Sweden’s Torture Division. This new one is named The Reaping.

As followers of the band know, they periodically release demos for free, and each time they complete a trilogy of demos they package them up for release on a compilation CD. In 2013, Torture Division released two demos, both of them (as usual) mixed and mastered by the masterful Dan Swanö at Unisound. The first one was named The Worship, and I reviewed it here. The second one was The Sacrifice, and I reviewed that one, too. And then I also picked one of the 2013 songs — “All Rise” — for my list of 2013’s Most Infectious Extreme Metal Songs.

The Reaping completes the latest trilogy of Torture Division releases. This one was also mixed and mastered by Dan Swanö, and in addition to providing a free download of the songs in mp3 format, this time Swanö has prepared a download file of the songs in full dynamic range FLAC format for the audiophiles out there. So go thank Mr. Swanö by liking his Unisound Facebook page, dammit!

And now, for a few words about The Reaping.

And now for just a few more words:  All hail the torturers — Lord K Philipson (guitar), Tobben Gustafsson (drums), and Jörgen Sandström (bass/vocals) — because in The Reaping they have once again delivered unto us three more goddamned delicious servings of Swedish death metal (and I must give an extra round of applause for guest clean vocals by Jonas Åhlén at the end of “Lady Skeleton” and the fucking bestial abyssal ones by Nick Sagias at the beginning and end of “The Reaping”).

And now, listen to one of the songs, which I’ve taken the liberty of putting on our Soundcloud to give you a taste of the goods. You can download The Reaping in mp3 or FLAC via these links (both come with a one-page PDF), and you can bang your fucking heads to “Offerlamm” below.

3 Responses to “SHORT BUT SWEET: TORTURE DIVISION — “THE REAPING””