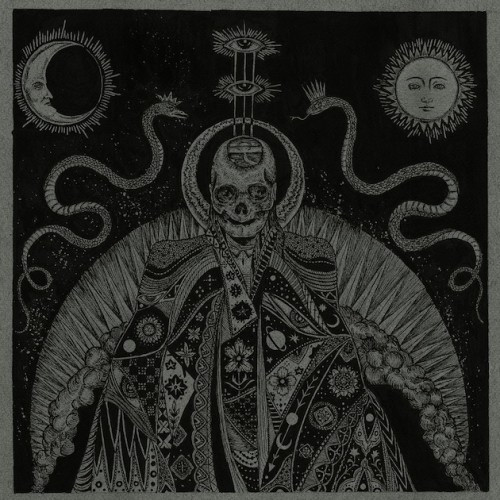 Boston’s Fórn hit our radar screen about a week ago when Invisible Oranges premiered “Dweller on the Threshold”, the first advance track from the band’s forthcoming new EP, The Departure of Consciousness. I’m still trying to recover from that obliterating experience; the recovery has taken longer than originally predicted because just when I feel about ready to get out of bed, I go back and listen to the song again. I’m going to be bed-ridden for a lot longer, because I’ve also been listening to a second song from the EP, which we have the good fortune of sharing with you today in this premiere.

The song you’re about to hear is “Suffering In the Eternal Void”. Chiming like bells, the slow, melancholy melody at the song’s beginning catches hold very quickly. Five or six minutes of that could prove to be thoroughly hypnotizing. But just as the music has succeeded in gently pulling you into its embrace, it then  tightens its grip and drags you bodily into a pit of deep, suffocating doom. That seductive melody becomes a crushingly heavy dirge, though no less seductive — this misery is mesmerizing. And the vocals, they sound like sulphuric acid eating through steel, or like some shrieking poltergeist that has become your companion for this slow fall into the void.

Yet another powerhouse song from a band whose name deserves to be spread like a plague.

In addition to listening to “Suffering In the Eternal Void”, be sure to check out “Dweller on the Threshold” — together, they make a hell of a bruising one-two punch. It’s streaming at this location:

The Departure of Consciousness will be released by Vendetta Records on July 15. Fórn has a Facebook page here and a Bandcamp page here; digital downloads will be available at the Bandcamp page. And if you can, catch Fórn in the flesh at one of these dates:

And now here’s our premiere of “Suffering In the Eternal Void”. Below the studio track, I’m also including a video (filmed by Freddie Ross) of Fórn performing the song live on June 29 at Dusk in Providence, R.I.

5 Responses to “AN NCS PREMIERE: FÓRN — “SUFFERING IN THE ETERNAL VOID””