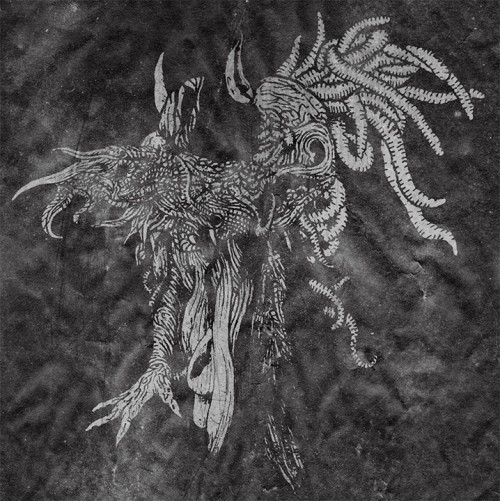 I’ve been waiting for this one anxiously. And then, as (bad) luck would have it, when my beautiful pumpkin orange vinyl copy of this 7″ split arrived late last week from Holy Terror Records, my turntable decided to turn mulish and uncooperative. Fortunately, Holy Terror relieved my frustration and spared that turntable a severe beating when it decided to begin streaming the two songs on Bandcamp beginning late yesterday.

The split features songs by two of the longest-running and most influential of U.S. black metal bands, Leviathan and Krieg. It is a natural pairing in many respects, not least because of the friendship between Leviathan’s Wrest and Krieg’s N. Imperial, and thus it’s not surprising that the idea for it was conceived almost a decade ago. Yet only now has the split become a reality. Impressions of the music follow… 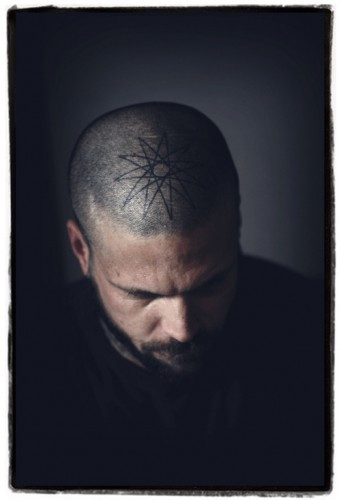 Leviathan’s track is entitled “…And A Slave”. It was recorded during the sessions that produced Leviathan’s 2008 album Massive Conspiracy Against All Life. Like the best of Leviathan’s work, the song moves — and I’m not referring solely to its pacing, though it’s definitely an energized track that rocks as much as it rips, anchored in riffs and beats.

No, what I mean is that the song is dynamic. As I hear it, in the course of its rushing flow it goes from blackened punk to a blast-beat-driven razor storm to industrial-tinged rock laced with writhing riffs — and surfacing here and there are whisps of the eerie atmospherics that has marked so much of Leviathan’s work with which I’m familiar.

It’s cold and grimy music, but it jumps — and through it all Wrest shrieks like a creature not born of woman.

Leviathan has a new album due for release next year, tentatively entitled Scar Sighted. Based on a very interesting recent interview of Wrest at Steel For Brains, it seems unlikely that the material on the new album will be in quite the same vein as anything that has come before it. Whether “…And A Slave” is a portent of things to come or a relic of a different time remains to be seen — but it’s a damned fine song regardless. 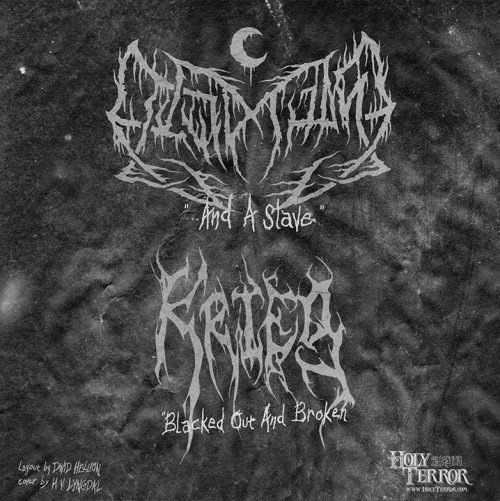 Krieg’s song on the split is named “Blacked Out and Broken” and it was recorded this year. The introduction features the sound of strings and a cacophony of black noise, but that doesn’t last long. The music soon begins to race in a hail of buzzing guitars and blasting drums as Imperial’s powerful, serrated voice roars in a tyrannical fury.

The song moves back and forth between storming and rocking, but the melodic atmosphere of the music — which becomes more pronounced as the track progresses — is grim, icy, and harrowing. This has already been a big year for Krieg, one that has seen the release of splits with Ramlord, Wolvhammer, and Moloch, as well as the band’s seventh album, Transient, and this new song is further proof that the creative fires are still burning hot after almost 20 years.

I bought this split based on the bands, without hearing a note or reading a review, and now that I’ve heard it, I’ve concluded that I spent my money wisely. This is very much worth having, for reasons well beyond its uniting of these two pioneering bands. Vinyl editions are still available at the Holy Terrorstore, and it’s also now available as an inexpensive digital download at the label’s Bandcamp page (linked below). The very cool cover art was created by H.V. Lyngdal (of Iceland’s Wormlust).

This is the music:

6 Responses to “SHORT BUT SWEET: A LEVIATHAN / KRIEG SPLIT”