Just in time for Samhain, Indiana’s Ptahil have released an official video for the song “Don’t Drink From the Waters of Lethe” from their 2014 album Born Against, which is available on Bandcamp (here). The song is a fitting choice of this day and a blast to hear, beginning as an ominous processional and then erupting about halfway through into a conflagration of corrosive riffs, frenzied soloing, and pummeling drum beats, as the bestial vocals proclaim a warning.

The video, which is part live action and part animation, was filmed by Ptahil’s drummer and backing vocalist J. Mhaghnuis, and he also created the animation. Check it out below. Have fun tonight — but you know what not to drink.

Well, I don’t know about you, but I think Bloodbath picked a fine day to premiere the morbid title track to their forthcoming fourth album Grand Morbid Funeral.

So far, it seems that at least half of the commentary about the music that has premiered to date has consisted of a tug of war between those who like Nick Holmes’ vocals and those who don’t. When I heard the first song from the album, I was a little underwhelmed by them — though in my defense I admitted that I was undoubtedly influenced by the memory of those who had come before him.

But I must now say that his voice is growing on me. For most of its length, this new song is a slow, ghastly doom/death golem, with supernatural voices  and an unwholesome melody floating around the huge, pounding riffs like ghostly outriders, and Holmes’ jagged croak suits the grisly atmosphere. And when the song starts too careen like a flurry of bats, Holmes sounds suitably unhinged, like a madman in an asylum who has something very important to tell you — right fucking now!

Grand Morbid Funeral will be out on November 8 via Peaceville. Go here to listen to the song. 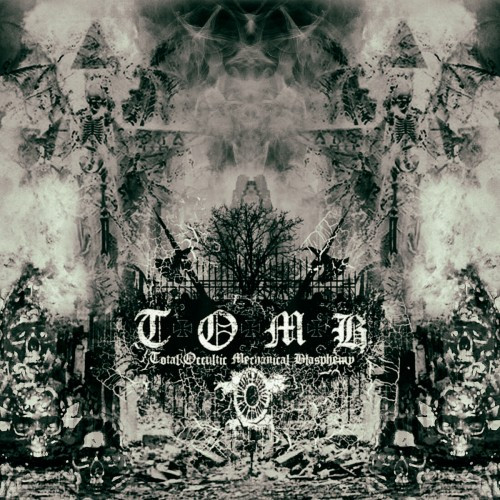 Earlier this month I discovered the existence of the Pennsylvania-based one-man blacknoise project known as T.O.M.B — Total Occultic Mechanical Blasphemy. In exploring the music I learned that the recordings of T.O.M.B. usually begin with field recordings in such places as mental institutions and cemeteries and often involves the use of ritualistic bone implements applied to such things as headstones and cadavers. More information can be found in this post.

When I wrote that earlier post, the most recent T.O.M.B. release (on the Crucial Blast label) was an April 2014 compilation of two previous works — an album named Pennhurst recorded at two Philadelphia-area mental asylums and originally released in 2009 by Esto Perpetua Records, and an EP named Xesse originally released on vinyl by by Prison Tatt in 2011.

However, one week ago Todestrieb Records released a new collection of sounds entitled Total Occultic Mechanical Blasphemy-III. It includes Macabre Noize Royale (originally released by Todestrieb in July 2008), Nameless Spells and Incantations (originally released in June 2013 by DumpsterScore), and a recording of a live T.O.M.B. performance in June 2014 in Brooklyn, NY, at a show headlined by Watain.

For that live performance, the T.O.M.B. lineup consisted of NO ONE, Brian Zimmerman (PANTHER MODERN), Joseph Curwen (GHORAGEIST), and Samantha Viola (SKULSYR). A video of the performance was recorded by (((unartig))). I’ve included the video below; the audio on the new compilation was taken taken directly from the source and then remixed. The Bandcamp stream of the new release is also below.

The live recording, which is the final track on this new comp, is especially Samhain-appropriate. It takes little effort to imagine that you have crossed over into another realm, one populated by poltergeists and by more corporeal entities engaged in incomprehensible but fearsome industrial activities. The atmosphere of the performance is both spectral and disturbingly physical — and fascinating.