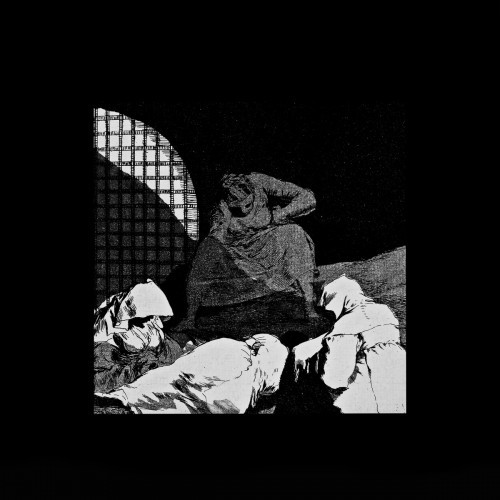 I first came upon Urzeit through a guest review of their impressive first demo posted on this site back in February (they have since released a second one). The band’s three-person lineup reportedly includes two members of Ash Borer and Triumvir Foul, plus the sole member of Mizmor.

Urzeit’s part of this new split consists of a single long song, “Schädlicher Einfluss”. A needling tremolo melody sprays the serpentine music in shades of indigo from the beginning, though the slow slithering turns into a bouncing, punk-flavored romp and then a clawing fury as the song progresses, eventually staggering into a dirge-like crawl, as if the last of the oxygen has been sucked into the void.

There’s a foul, rotting air surrounding the song, and the vocalist’s impressively inhuman shrieks, growls, and roars deepen the music’s unsettling atmosphere of demented malignancy. By the song’s end, he sounds as if he’s finally hit bottom in a pit of despair.

Akatharsia appears to be a fairly new project whose four-person line-up includes members of Fell Voices and Negative Standards and a former member of Lycus. As far as I can tell, the three songs on this split represent their second release, following an 8-song demo that appeared earlier this year (and is available on Bandcamp).

Akatharsia’s songs are foul in a different way. They’re as much primal punk sneer as they are black metal venom, with hook-laden, high-energy chords trading places with crusty, stomping riffs and the corrosive squall of feedback. A rippling tremolo melody jets through the filth of “Suicidal Instinct”, “Perpetuating Rigor Mortis” is part ripping mosh-trigger and part morbid stagger, while  “Putrid Luxury” eventually devolves into a writhing mass of abrasive noise, stripped of all rhythm and melody. Throw in some truly nasty vocal vehemence and you’ve got a listening experience that’s as pathological as it is dynamic.

The split will be released on 10″ vinyl limited to 300 copies and can be pre-ordered via the Bandcamp links below. Each band’s songs are also available for download now on their respective Bandcamp pages. Listen to the songs below.

4 Responses to “SHORT BUT SWEET: URZEIT AND AKATHARSIA – A SPLIT”