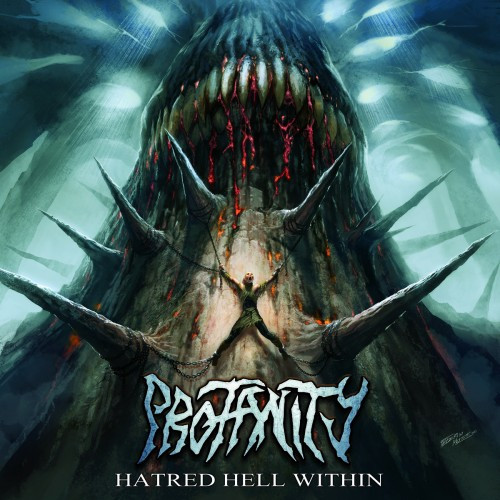 (DGR has found an EP released in December by a resurgent German band that he really seems to be enjoying, as he explains in this typically extended and typically entertaining review.)

Death metal groups reanimating from the dead after a decade-plus-long hiatus seems to be happening more in the underground scene these days. Given that some of these groups never had a huge reach to begin with, it seems slightly easier today for them to appear at different points in time after years of silence, but I also think that the internet has started to have a much bigger effect on the decision of groups to come back.

The net has become something of a great equalizer, where at least on the right sites, small bands with a handful of fans can appear on the same front page as a group in a bigger spotlight. This phenomenon has helped make it possible for people to re-discover bands who have been dormant for years, bands who may have struck out PR-wise or just never been lucky in breaking out of their region, and groups who were clearly onto something and the stars just didn’t align for them at the time.

Now, people have platforms upon which to preach about such groups, converting fans and at times encouraging people to reunite. Added to this is also the relative ease with which bands can reappear now, with sites like Bandcamp making it a breeze to set up shop and get themselves out there, so long as their recordings aren’t hot garbage. 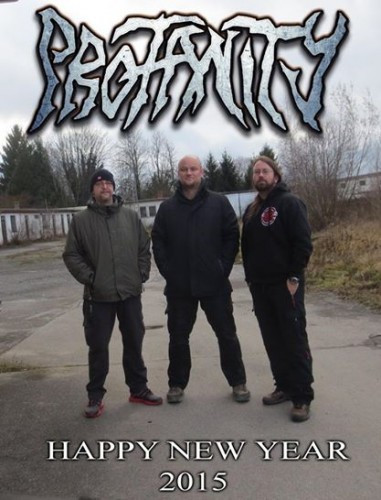 The latest trigger for these musings is the German progressive/technical death metal band Profanity — who returned in the middle of December with a three-song EP entitled Hatred Hell Within after near twelve years since their last release.

Hatred Hell Within marks the reactivation of a band who have been around since the early ’90s, one with two full releases and a handful of demos and splits between them. Twelve years later they’ve managed to preserve a large chunk of their lineup — listing themselves as a three-piece group these days.

Prior to Hatred Hell Within, Profanity put out a single in 2002 entitled Humade Me Flesh (which will be a theme reappearing later in this article), and before that was only the group’s second LP Slaughtering Thoughts (2000). In Profanity’s case, the band have been keeping their noses to the grinder as a live act — before returning to the recorded format. Given that we’ve made it a mission on NCS to discover stuff months after release, as well as sharing underground music with gore-soaked cover art, we felt the reanimation of Profanity would be a good tour to take into the boiling cesspits of death metal.

Hatred Hell Within is a three-song force to be reckoned with. Three songs sounds like nothing, but Profanity like their music long — Hatred Hell Within clocks in at a little under twenty minutes. In that twenty, Profanity get exploratory — covering the ugly genres with the deftness and grace of an elephant doing ballet; to mix metaphors, they throw their weight around with the force of a bull in a china shop.

The band’s current label, Rising Nemesis, has a taste for packing a lot of slam music into their gullet, and even though they’ve signed a smattering of different-genre death metal acts, the label specializes in brutality above all else, and Profanity earn their keep on Hatred Hell Within.

Germany itself has shown a taste for this as well, with a seemingly ever-growing scene coming out of there for decades now. When I say that Profanity explore the uglier genres across twenty minutes, it’s done through a caveman-like sense of brutality, with rhythms clubbing up and down and deep, gutteral growls being the engines that drive the music forward. The songs rumble in the same way I imagine tectonic plates do when they collide with one another.

The EP’s first song, and shortest track, is named “Melting” and it starts off with its foot planted through the accelerator. The only breath you really get when that song kicks in is during the time it took you to hit play, before the track has already reached terminal brutality. It’s a very traditional death metal song in its opening; the riff seems to squirm across the guitar before a succession of quick high notes and squeals calls for the second verse of the song.

“Melting” gains its technicality in the rapid-fire delivery of its guitar sections, as well as the relentless blast performance happening behind it. In their approach to “Melting”, Profanity definitely live up to the stereotype of ruthless efficiency in death metal, tapping things out so fast and with so little room to breath that four minutes feels like the blink of an eye. It’s on the following two tracks that the band attempt to earn their stripes in a more progressive role.

“I Am Your Soul (You Made Me Flesh)” — see, told you it would come back — is another assault from the get-go before a quick breather. “Progressive” is such a strange take for this song, but I’m only using it in preference to a word like “exploratory”. The song is strikingly technical, but also barbaric. It, and its brother in the titular track “Hatred Hell Within”, are monstrous displays of death metal that dance between an utter and straightforward bludgeoning and a machine-gun spray of notes bent, twisted, and mutated into whatever forms Profanity found would serve, with a little bit of grotesque sci-fi on top.

The two tracks, for their combined fifteen-plus minutes of this EP’s run length, feel like a low-grunted assault on the senses, with the drums sometimes drowned behind an array of notes and bass-guitar piledrivers. Every shout of “You Made Me Flesh” feels militant, especially since each syllable is marked by the start and stop of the instruments behind the vocals. They punctuate each word like mortar fire.

I don’t know if you could even posit that “I Am Your Soul” has multiple movements, because eight minutes feels like a blur. Profanity have essentially one speed, and it is really fast. The times when they do slow down feel like violent decelerations, and then the band usually pulls off some multitude of bass-string pluckings that feel like they came out of nowhere and are then right back at a million miles per hour. It’s death metal written by terminators — minus the usual industrial flair and instead focusing on the piston-like nature that being machines allows them to have.

The title track “Hatred Hell Within” does its best to fold the two styles of “I Am Your Soul” and “Melting” together. The duration is shorter by a whole minute, meaning that the song is a blistering seven-and-a-half minutes. It’s another track dense with riffs, low growls, and a battering ram that has disguised itself as a drummer. The guitar parts in this song are as intricate as the band could make them, each measure packed with as many parts as they could allow into it. As in “I Am Your Soul”, the group also grunt and slam their way through sections in which they slow down for a quick breather.

You’ll probably never mistake Profanity for a doom band on Hatred Hell Within. Despite the admittedly intimidating song lengths, this is a demonstration of intricacy and technicality for which the tech-circles are mostly known, but put through the lens of a brutal death metal band. Hatred Hell Within is a meteor strike of a death metal EP, hitting super-hard, fast, and coming out of nowhere. You blink and all of a sudden the whole cityscape before you has been flattened by a massive boulder.

Profanity certainly don’t make themselves approachable, coming off a bit rawer than the polished sheen of the modern technical death metal scene, but Hatred Hell Within still sounds good. It is one of those discs that is 100% red meat, knowing full well that it pays its bills in crushed skulls and broken limbs. It just happens to do so in an impressive and exploratory way. It feels like a surgeon having fun playing with a dessicated corpse, figuring out the different ways it can be dissected and sown back together and still somehow resemble death metal.

Twelve years is a long time to not put out material, but Profanity are showing on Hatred Hell Within that there is a method to their madness, and they have delivered a nugget of gold that teases a bigger vein to look forward to in the future. As it stands, Hatred Hell Within is a headspinner of a twenty-minute EP that feels like it could suffocate you under its weight during multiple listens. If you survive one, be sure to clear out of there fast before the hammer drops again, lest you be ground to dust.

2 Responses to “PROFANITY: “HATRED HELL WITHIN””