Öxxö Xööx are a French band whose members are Laurent Lunoir (music, lead vocals, visual design), Rïcïnn (Laure Le Prunenec) (vocals, live bass), and Isarnos (Thomas Jacquelin) (drums), with studio engineering by Igorrr (Gautier Serre) of the band Whourkr. I first came across them in 2011 in one of my irregular MISCELLANY excursions and wrote about their unique debut album Rëvëürt. On May 26, Finland’s Blood Music label, which seems to have a knack for signing bands whose music is well off the usual beaten paths, will be releasing the second Öxxö Xööx album, Nämïdäë. In this post we’re premiering the seventh track from the album — “Äbÿm” — and I predict you haven’t heard anything like it, unless perhaps you’ve heard Rëvëürt.

Some things haven’t changed since that first release: The band still have an affection for umlauts. The band are still speaking their own language (their name is a binary representation of the number 69 [in binary code, 0110=6 and 1001=9], which (among other things) relates to flipping life on its head, to turn bleakness into light). They still have an extravagant talent for combining visual with musical art (as you’ll soon see), and their music is still avant-garde, with a capital A and a capital G. 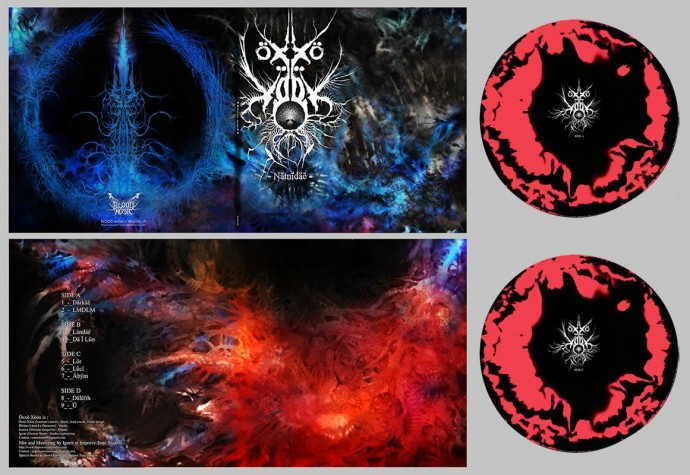 The band themselves have described their music as “experimental and flamboyant doom metal”. I applaud their effort to make a succinct description, because we metalheads do like our genre labels, but any kind of label is going to fall short in capturing what these people are up to.

“Äbÿm” is a head-spinning amalgamation of symphonic orchestration; unpredictable rumbling percussion; sweeping gothic melodies; chants, shrieks, and wild vocal duets (both male and female); tinkling harpsichord notes; and riffs that jab and grind. It is indeed flamboyant and bombastic. It has operatic flair, with a metal undercarriage. It pulses with life, it’s inflamed with passion, and it has a strange, magnetic attraction.

I’ve only heard two other songs from the album so far, and they’re also amazing. I have a feeling that listening to the entire album is going to be a real trip. I’ll be interested to see what you think — so please leave comments.

Nämïdäë will become available for pre-order from Blood Music on March 18 at 5 p.m. Finnish time (11 a.m. EDT in the U.S.) in different vinyl configurations, including the limited red/black smashed color swirl pictured above. The band’s first album is available on Bandcamp (here). Blood Music’s site is linked below.

Below our premiere of “Äbÿm”, you can also check out a previously released music video for a song from the album named “LMDLM”.