Kavyk is the name of a new band from Hammond, Louisiana, whose four members come from the ranks of Legions of Hoar Frost, Celestial Mechanics, Withering Light, Suspended Obscurity, and In Medias Res. They’ve recorded a debut demo that will be released later this year, and today we introduce you to Kavyk’s music through our premiere of one of the demo’s songs: “Hymns and Hollow Words”.

Over the last couple of years, song and album premieres have become a weekly staple at our site. Though we only feature them when we truly enjoy the music, the significant majority of them have come our way from record labels (both large and small). In this case, the song arrived directly from the band — and a brand new band at that. But the song immediately grabbed me, like a cat on a somnolent mouse. And like the cat in that metaphor, it quickly shot an adrenaline charge right through me as its teeth clamped down on my neck. It’s quite an awakening experience. 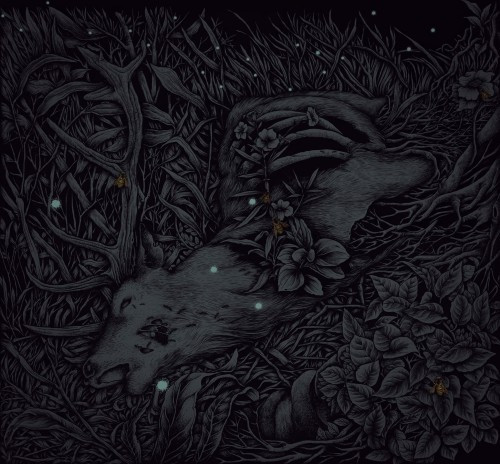 The opening barrage of clattering drums and lead-weighted riffs is electrifying, and as the morbid gloom of the melody unfurls, the thunder in the low end becomes even more decimating. The grinding riffs and double-bass frenzy are spine-shattering, like an industrial-strength bone saw at work on a pile of fresh corpses. But it’s when the lead guitar emerges, laying down a serpentine, doom-laced melody, that the song really sinks its infectious (and infected) hooks into your head, and they don’t come loose.

“Hymns and Hollow Words” features guest vocals by Dallas Smith of Louisiana’s Barghest, and his gritty roars are just as electrifying as the instrumental music. Finally, as if to prove that Kavyk’s capabilities extend beyond whipping like a whirlwind, the song slows to an oppressive stagger before reaching its end, further solidifying the description given by the band to their own music: “progressive blackened doom.

Kavyk’s demo will also feature guest vocals by Mike Thompson of Withered. The band’s line-up is as follows:

Below you’ll find links to Kavyk’s Bandcamp and Facebook pages, followed by our stream of “Hymns and Hollow Words”.

One Response to “AN NCS PREMIERE: KAVYK — “HYMNS AND HOLLOW WORDS””