The roots of Entrails in this style of music go deep, the band having achieved their first incarnation in 1990. And despite moldering in the grave for a full decade, they’ve turned in one winner after another following their reanimation with 2010’s Tales From the Morgue. If “Beyond the Flesh” is a good indicator, the new album will be another one.

Don’t be bashful: Turn your goddamned volume up before you play this song. Get the full impact of those enormous, smoking chainsaw riffs. Feel the brunt of the percussive hammer blows. Let the sinewy guitar leads infiltrate your grey matter. Allow the predatory vocals to sink their teeth into your neck. And then, when Entrails ease off the gas pedal in the song’s second half, get a good headbang going while you wallow in the thick, morbid atmosphere. This is a Grade-A prime cut of death metal beef served Swedish style, and yes, I want seconds.

Obliteration was recorded by the band’s founding guitarist Jimmy Lundqvist at his own Bloodshed Studios and it was mixed and mastered by none other than Dan Swanö at Unisound. The track list leaves no doubt about what lies within:

1. No Cross Left Unturned
2. Epitome Of Death
3. Beyond The Flesh
4. The Grotesque
5. Obliterate
6. Skulls
7. Midnight Coffin
8. Bonestorm
9. Abyss Of Corpses

Obliteration will be released via Metal Blade on May 15, 2015. For pre-order bundles, visit this location.

A band named for the elvish sword wielded by Gandalf is already halfway home in my book. But Foehammer’s music carries me the rest of the way quite easily.

This three-man band from the DC area recorded their self-titled debut album with the part-studio, part-label Grimoire Records, and it will now be released jointly by Grimoire (on CD, pro-cassette, and digitally) and Australopithecus Records (on vinyl). On the second day of this year I wrote about the first track from the album that Grimoire had released as a teaser on Bandcamp (“Stormcrow”), and now Noisey have premiered a stream of the entire album. I’ll just quote Kim Kelly’s introduction and then encourage you to go let this album chew you up and spit you out:

It’s no secret that I’ve got a gaping soft spot for funeral doom, and Foehammer’s seismic pace and tension headache riffs fit right in there snugly. The album’s three songs are utterly devoid of European romance or keyboard-y flair, though; rather, a bitter miasma also surges through their recordings, recalling the poisonous sludge of feedback-loving greats Noothgrush, Corrupted, and Burning Witch.

You can pre-order Foehammer on CD at the Bandcamp link below (to be released on April 7), where you can also stream “Stormcrow”. The vinyl can be ordered via this link. And the Noisey premiere is at this location. 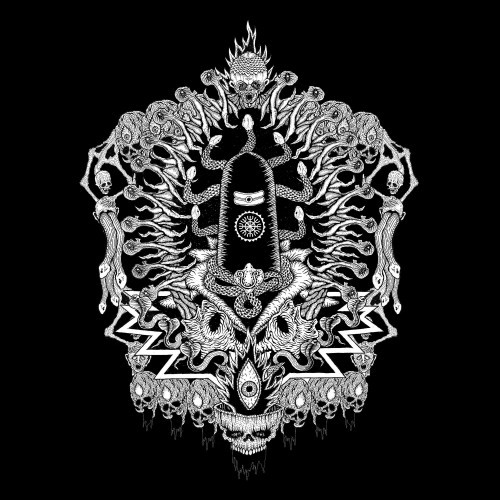 Last November we had the pleasure of premiering a song from a forthcoming release by those vicious Canadian purveyors of Total Death, Vault of Dried Bones. The band was a group of Sri Lankan terrorists named Genocide Shrines, and the name of the song was a mouthful: “Subterranean Katacomb, Termination Temple (Henotheistic Primal Demiurge)”. The album title is a mouthful, too: Manipura Imperial Deathevokovil (Scriptures of Reversed Puraana Dharmurder).

So far as I know, the album hasn’t yet been released, but I found over the weekend that the band have uploaded a pair of songs to YouTube as a single clip. They are the album’s fourth and fifth tracks, “Ethnoheretical Padmavyuha Consecration” and “Pillar 2 (Rape of the Kamadhenu)”.

If you missed our previous premiere, be forewarned: You’re about to be assaulted by a holocaustal rampage of blackened death metal warfare. The music is distorted within an inch of its life, so murky and rapacious that it’s a wonder when you hear the shimmer and ting of cymbals piercing through the malevolent noise and tyrannical vocal malignancy. But the music also has driving beats that are irresistibly attention-grabbing, and a knack for dynamic pacing that allows you to catch your breath before the band unleash the vortex again. And when “Pillar II” unwinds, the tribal rhythms and surrounding exotic sounds remind you that this band have not lost their sense of place.

Relevant links are below, followed by these two new obliterating tracks.