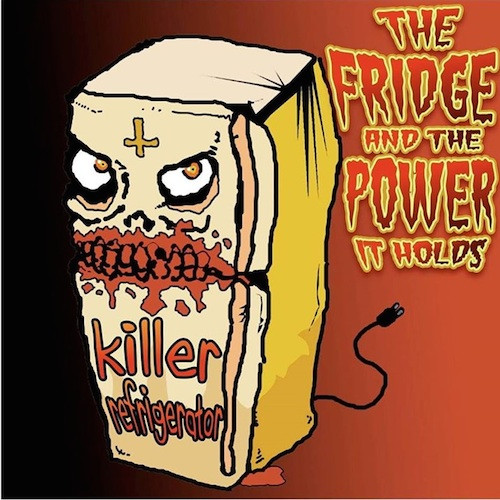 WAIT!  DON’T LEAVE! Yes, I know you’re usually into the grymm and the kvlt, and you’re instinctively suspicious about bands whose names and album titles sound like they’re just goofing around — but suspend your skepticism for a minute and hear me out.

You see, I had the same initial reaction when we were approached about premiering this new EP. With a band name like Killer Refrigerator and a thematic focus on a war between humanity and the appliances that rule and control our lives, how could you possibly take the music seriously? While I acknowledge it’s true that we are indeed enslaved by our dependence on our smartphones, blenders, and toaster-ovens, would there really be anything worthwhile in songs named “Slaystation”, “Shower Thrashing Death”, or “Slave To the Easy-Bake”?

Turns out the answer is a resounding YES — that is, if you have a taste for thoroughly brain-twisting, ass-thrashing shred.

I suppose “thrash” or “death/thrash” might be the closest genre descriptors for the music, but neither one really captures the extravagance of the blazing, technically acrobatic fretwork on both the guitar and the bass. At times, the music incorporates the kind of freaked-out exuberance of a band like Blotted Science, with highly variable tempos and insectile guitar and arpeggios running rampant. At other times, it drifts into semi-meditative bass-led musings. At others it just pulls the trigger on dual flamethrowers and hoses you down with fire.

Alright, I confess: It also includes randomly strewn bits of electronica and hilarious spoken words, along with deranged (and equally amusing) vocal shrieking and roaring. So yes, it’s not completely serious — but it’s such a damned over-the-top explosion of unpredictable creative exuberance that I can’t help but be impressed. And, well, it’s just a hell of a lot of fun. Every song is a wild ride, loaded with surprises and performed with the kind of skill that makes your mouth drop open in wonder.

The Fridge and the Power That It Holds will be released by the band on April 7. As a backstory to their origins, the band recently released a 20-minute documentary featuring the exploits of the band’s two members, Cody Coon (UnKured) and Luke “Java” Sackenheim. The documentary can be viewed here. For information about how to obtain the EP, watch this space:

3 Responses to “AN NCS ALBUM PREMIERE: KILLER REFRIGERATOR — “THE FRIDGE AND THE POWER THAT IT HOLDS””