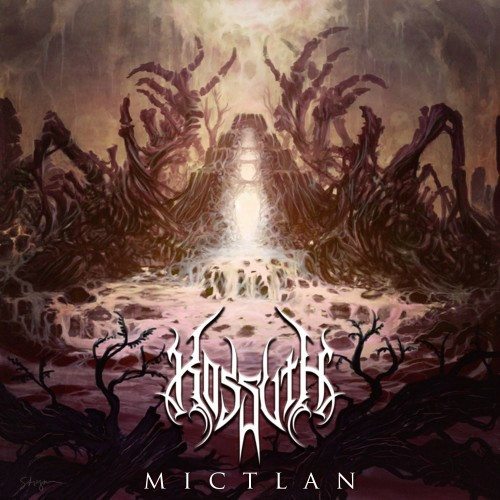 (Austin Weber introduces our premiere of a song from Mictlan, the debut EP by an Indiana band named Kossuth.)

For reasons unknown to me, the state of Indiana has been a hotbed for killer death metal ever since I first got into metal around 2002. The first wave, in my opinion, was kick-started by the release of the now legendary Twilight Of The Idols by Harakiri, which was put out by Willowtip and is one of my all-time favorite death metal records,

In my time here at NCS, I’ve written extensively about death metal acts from Indiana, including bands such as Primordium, Dawn Of Dementia, and Breeding Filth. Now we can add another band, Kossuth, to that list of fresh new death metal talent coming from Indiana.

The interesting thing about Kossuth is that while they cover the same type of complex, melody-driven technical death metal as Dawn Of Dementia, the creative presentation, deft songwriting, and progressive nature woven throughout Mictlan show a band already setting themselves apart. Plus, I really enjoy looking at the awesome artwork that Sam Nelson did for the EP as well.

The imaginative and extravagant form of death metal on display in today’s premiere of “Plains of the Soaring Dagger” hits you with a dual approach, like a lethal merger between The Black Dahlia Murder and Beyond Creation fused into a nightmare both demolishing and dream-like. If you enjoyed the first Son Of Aurelius record you’d also be interested in this, as there are sonic parallels between the two as well.

Throughout “Plains of the Soaring Dagger”, the band pull the rug out from under you and split into new segments at a dizzying pace and frequency. Once the track begins, it rarely touches the ground — this is rocket-fueled, surgically precise tech-death that walks a fine tightrope between deathly forms and big, beautiful, flowing melodies coupled with scorching solos.

According to the band, Mictlan will be out soon, sometime between the end of April and the end of May.

2 Responses to “AN NCS PREMIERE: KOSSUTH — “PLAINS OF THE SOARING DAGGER””