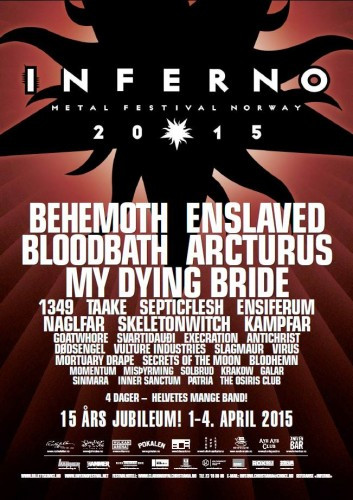 (Andy Synn reports on the third day of Oslo’s Inferno Festival 2015 and provides photos.  For Andy’s report on the pre-fest show last Wednesday, go here. His report on Day One is at this location and his Day Two review is here.)

The final day of a festival is always bittersweet. On the one hand you have all these new memories of the music you’ve experienced and the new friends you’ve made (that last point is conjecture, since I am, by nature, not the most social animal when confronted with large crowds of people), while on the other you know that, like all good things, even this must come to an end.

Still, on the plus side you’re also very much aware that you have one more day of music left, and in this case it was a day of (almost) unadulterated awesomeness…ness. 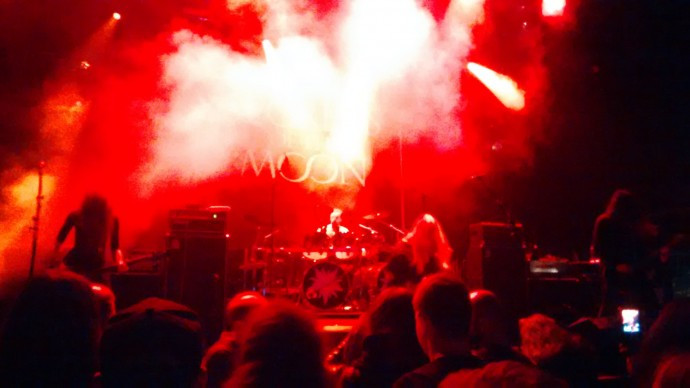 It helps of course when the first band of the day is one of your all-time favourites, and that they play like they’re headlining the whole damn festival!

Avoiding the almost ubiquitous curse of the missing-bass tone that seems to have afflicted a number of bands on the main stage, Secrets of the Moon slithered sinuously out of the gate with a creepy, crawly rendition of “Serpent Messiah”, backed by a truly meaty low-end rumble, followed by a crushing run-through of the classic “Lucifer Speaks”, and then proceeded to claw their way through a set of humongous, stomping riffs and sombre, seductive melodies.

Gloomy new track “Man Behind The Sun” (from upcoming album Sun) gave us some hints as to the band’s continued progression, coming across like a bleaker, blacker version of Alice In Chains at their darkest and most dour, while the conclusive convulsions of “Carved in Stigmata Wounds” demonstrated that Black Metal can be both utterly obliterating and surprisingly technical, the band once again standing out from the crowd with enviable ease. 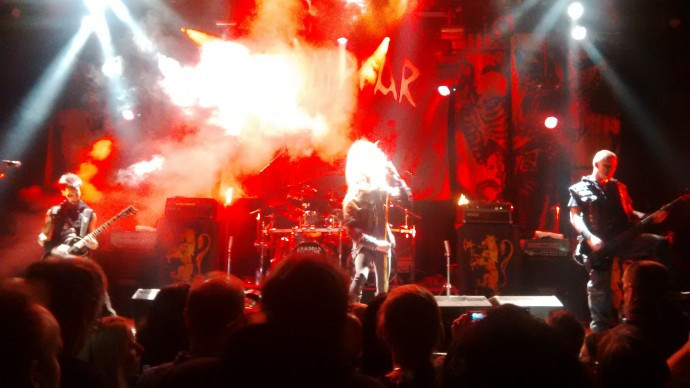 Talking of bands playing like they were headlining, in hindsight it seems to me that Kampfar should have been headliners in their own right, such was the brilliance of their performance this evening.

Spitting both metaphorical and literal fire, the band’s set was ablaze with both passion and pyro, their glorious blending of rampant, almost Immortal-esque riffs, unstoppable punk-fuelled energy, and grandiose, folk-touched melodies managed to be somehow both cutting-edge yet rooted firmly in the ancestral traditions of Black Metal, and sounded as vital and invigorating as the day the genre first took form in the mist and shadows of Norway.

Led, as always, by the seemingly ageless Dolk  – perhaps the one man capable of challenging Hoest’s supremacy as the living embodiment of the spirit of Black Metal – the quartet asked no quarter and gave none in return, cementing their status with a performance that I for one believe will be spoken of for years to come. 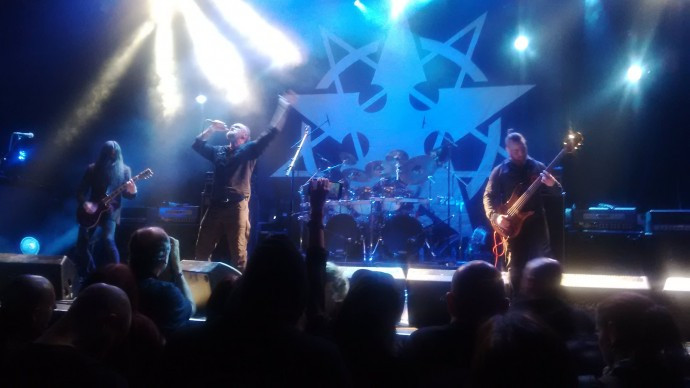 Sticking around in the main hall for yet a third band meant I was treated to the aural kaleidoscope that is Dødheimsgard, a band of musical misfits who have most definitely gone off their meds.

The band’s twitchy, slippery, split-personality approach to Black Metal at times seems held together merely by grit and grim determination. One minute they’re blasting away like icy demons from the darkest depths, then suddenly they’ll be stomping around like cybermen from the nth dimension, before thrashing like a maniac (whiplash!) right until the moment they transform into Satan’s own lounge-band, filling your ears with devilishly smooth passages of jazzy deconstructionism, in a baffling display of (dis)organised chaos.

And yet it works so well!

I can’t fully explain how or why. It just does. And doubtless there’ll be a lot of people who disagree with me. But if there’s a thin line between genius and madness I’d say that Dødheimsgard have pretty much obliterated it. Probably by snorting it. 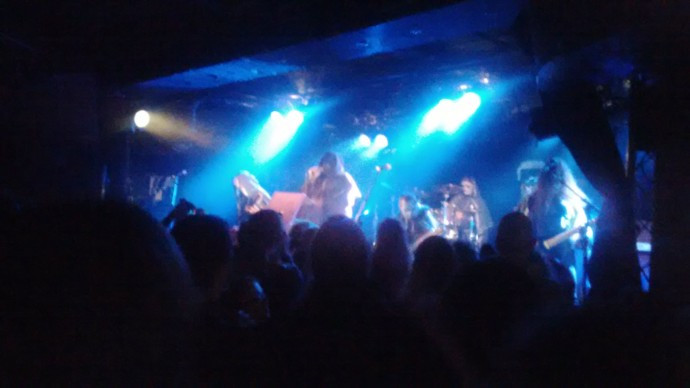 Downstairs on the second stage Italian witchmongers Mortuary Drape were next up, their slightly more workmanlike brand of Black Metal possibly coming across a little too simplistic for this reviewer, coming so soon after the weird wizardry of Dødheimsgard and the frankly astounding performance put on by Kampfar.

Ploughing a shamelessly primitive, old-school furrow, eschewing all but a few concessions to the genre’s slow-progress, the band’s big, booming drums and gruff, grimy vocals positively dripped with menace, yet on the whole the set seemed hamstrung by what felt like an over-abundance of familiar riffs and stock song structures.

Still, I have to admit I slowly came around to what they were doing as the set progressed as, beneath the admittedly poncy robes and unflattering face-paint (more Kiss Goes To The Carnival than hellish cadavers from the underworld), it felt like there’s a surprisingly technical, NWOBHM-influenced, Blackened Thrash band struggling to get out. 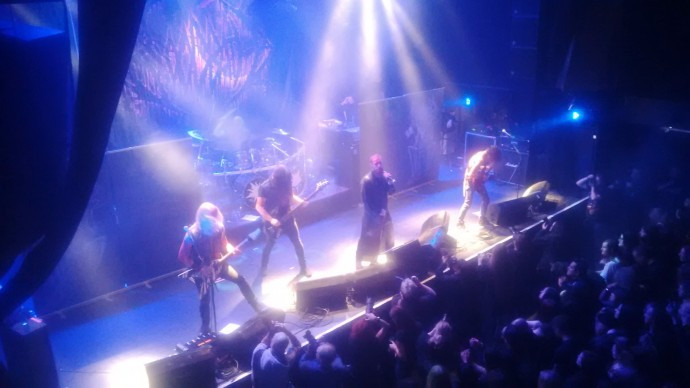 The finale of the night, and of the festival, was left to the gore-soaked reprobates in Bloodbath, now fronted by the devilishly charismatic figure of Nick Holmes (or “Old Nick”, as the band prefer to refer to him).

As enjoyable as they were, the previous times I’ve seen the band live (back when they were fronted by a certain Mr. M. Akerfeldt) still gave me the unpleasant feeling that the whole affair was at best a mere tribute to the band’s influences and, at worse, something of a knowing in-joke for the members. Not that it was ever a parody of course, but it still didn’t feel quite right to me.

However, from the moment the band kicked off with “Let The Stillborn Come To Me” from last year’s spiffingly filthy Grand Morbid Funeral it became clear that, with the addition of Old Nick, it’s a whole new ball-game.

Not that it was all plain sailing, as Nick was clearly more comfortable with his own material (and, surprisingly, the Nightmares Made Flesh songs) than the older stuff – although his sardonic humour certainly seemed to take this in stride, proclaiming at one point “This next one’s an old song that I didn’t sing on. There’s going to be a lot of those. Don’t fucking judge me!” – but still the band as a whole (including a shockingly dessicated-looking Per Eriksson) were on fire, vomiting up riff after riff of brutal Death Metal delights.

The only minor complaint I have about the whole set (barring an unfortunate and unavoidable technical mishap with Nick’s microphone about halfway through) was the lack of the latest album’s title-track, “Grand Morbid Funeral”, as a closer, as I really wanted to hear that song live. Ah well, maybe next time.

And that’s it. Another Inferno Festival done and dusted, featuring one of the strongest line-ups I think they’ve ever had, at least for me personally!

Here’s looking forward to next year!