(DGR wrote this review of the new album by Nightrage.)

Nightrage are a band who seem to exist by force of will. They have gone through numerous lineup changes and, across their discography, a whole smattering of frontmen have appeared, many of whom are names within the realm of melodeath. Since 2011’s underrated Insidious, an album that is easily one of their best and pretty much the spiritual sequel to earlier release Sweet Vengeance (including cameos by the same musicians who appeared on that album), Nightrage have once again found themselves in flux — with members leaving and then slowly being replaced. In the end, Nightrage have become a much smaller group than they were before, with founding guitarist Marios Iliopoulos and bassist Anders Hammer being the remaining constants. They are joined by new vocalist Ronnie Nyman to complete the three-piece that is the current incarnation of Nightrage.

Needless to say, four years is a long time for a band to be out of the limelight, and their new album The Puritan is itself a slimmer beast, one with sleeker and more to-the- point songs that reflect Nightrage’s new, slimmer line-up. It also shows that despite their ever-in-flux membership, Nightrage are still damned good at hitting a melodeath fan right in the pleasure centers of the brain. 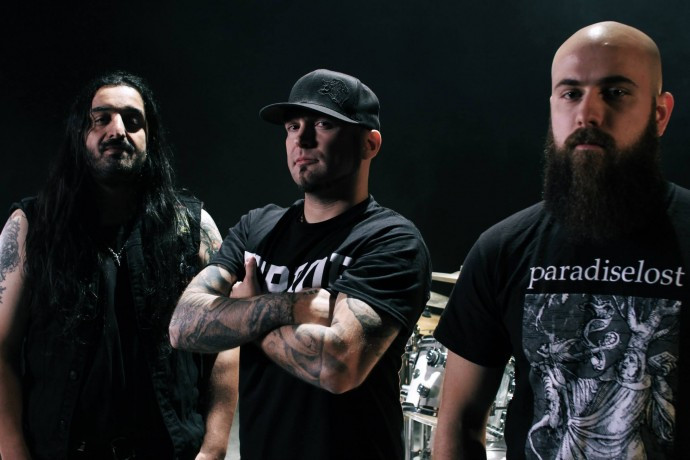 Nightrage’s ever-rotating cast of musicians has included such luminaries as both Tomas Lindberg of At The Gates fame and Gus G. of Firewind, Ozzy, and solo recording fame. They’ve had almost as many frontmen as they have had albums, and each one has brought something new to the table, as if each one has been aware that he has some pretty big shoes to step into, and consequently they have all brought their A-game.

At the same time, I would say that the group’s last lineup before the most recent changes that produced The Puritan gave us some of the best Nightrage material yet — both Wearing A Martyr’s Crown and Insidious are among my favorite discs by this band. Those albums made Nightrage feel like a group full of melodeath musicians who were not only amazingly talented, but also people who knew what they were doing so well that even the more mid-tempo numbers (the ones that usually cause me to groan and pass by, as they’re usually the ones most bands are tempted to fill with dozing, sort of mid-paced chugs) featured dueling leads and were catchy as all hell.

So with The Puritan, Nightrage have a lot to live up to, and in some ways they do. In other ways, The Puritan really does sound slimmer and more focused — there is barely any fluff on this release. With only one instrumental track and ten other songs, every one feels written to get in, land a couple of quick punches, and get right the fuck out.

The Puritan opens with its title song, for instance, which does the trick of having your first song be the one that hits the ground running. There actually aren’t that many slow songs on The Puritan; it feels in part like the disc is an exercise in the conservation of mass. Everything has to have a purpose on this album or the band doesn’t deal with it, and short of the one instrumental, a pretty good chunk of The Puritan is up-tempo. As a long-time Nightrage fan, I’ve enjoyed hearing that, as Nightrage are one of those bands who seem to be at their “best” when they have the proper melodeath-by-way-of-thrash speed going for them, and the proper one-two drumming behind it.

The title track has a insanely catchy, melodic worm of a riff that whips about from note to note. Behind it is a propelling rhythm-heavy riff that is designed to keep things gunning forward, alongside the bass and drum sections. It starts things off fully in Nightrage’s comfort zone, which is true of much of The Puritan, but it also immediately demonstrates how the band are going to be getting about on this album in their stripped-down form. It’s a patented songwriting style for them, and one they continue on the following song, “With The Blade Of A Knife”. 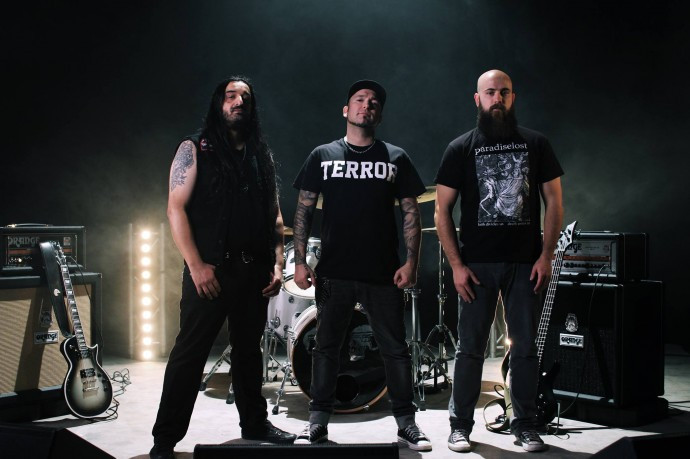 As mentioned before, vocalist Ronnie Nyman is the new blood in the game and he obviously has some pretty big shoes to fill. All of Nightrage’s vocalists have used different styles, and Ronnie veers closer to the style that Jimmie Strimmel had on A New Disease Is Born, with a very high shriek and sharply punctuated yells. Every once in a blue moon he goes a little lower and at one point he sounds dead-on like Marco Aro (during the song “Stare Into Infinity”). He doesn’t make much of an attempt at singing, instead deciding to be have his own knife at the ready at all times and just screaming at everything. When there is singing, it is picked up by Darkane vocalist Lawrence Mackrory, who makes an appearance on the song “Desperate Vows”. “Desperate Vows” is an earworm of a track that sees the two vocalists in a sort of unification of underrated groups. The chorus of “Desperate Vows” is intended to be a hook that attaches to yourself and won’t let go. It’s one that pops up in my memory whenever I think about the track, and at random times of the day as well, so on that front the band have succeeded.

Anders Hammer and Marios Iliopoulos are the gentlemen returning to the fold. Anders keeps the rhythm section going strong and Marios shreds away across the whole disc. To be fair, though, Nightrage is pretty much his game, and he again shows that he can kick out catchy riffs and strong leads like nobody’s business. The drumming on The Puritan is pretty much par for the course for a melodeath disc, constantly galloping and keeping things moving along at a brisk pace. It’s mixed well into the album, though, with the guitar parked at the forefront, vocals seated right along side it on a cushy, earthen throne of bass guitar and drumwork. The group do take one breather with that instrumental track “Lone Lake”, but other than that, Nightrage are all business all the time.

The Puritan is also a quick burner of a disc; as noted, it gets in, lands a few hits, and gets right the hell out. I’ve long held, and repeated time and time again, that melodeath has become my pop music and at times shares similar elements. It can be punchy, it’s definitely one of the lighter and more approachable forms of metal, and it’s often built entirely around a super-catchy chorus. It has sort of evolved into that style, and for me it’s perfectly fine. A straightforward and to-the-point melodeath album is enjoyable, even though I know that it’s just a quick rush to my system. Nightrage, on the other hand, have benefited from their own staying power.

The Puritan also has the blink-and-you’ll-miss-it repeat benefit, as closing track and headbanger “Kiss Of A Sycophant” loops right back around into “The Puritan”, going from one song built on a super-fast and catchy lead riff song right into another. Nice choice by the band to bookend their disc with this sort of song. It’s a less-dense album than Insidious was and shorter by a small margin — but it still has enough songs that will keep you headbanginging. It’s a quick rocker, and one with enough earworms to prove that Nightrage are continuing their unabated streak of being an underrated surprise. The Puritan will fit well into their discography. Nightrage have once again demonstrated that even though the group’s lineup changes with every couple of albums, redefining them in one way or another, they can still play better than most and are well worth your time.

The Puritan will be released April 24 by Despotz Records and is available for pre-order here.

One Response to “NIGHTRAGE: “THE PURITAN””