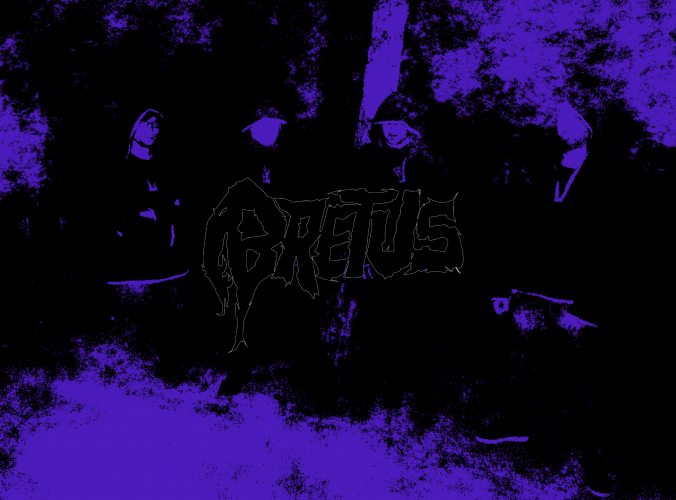 (Comrade Aleks presents this interview with members of Italy’s Bretus.)

The shadow falls on Innsmouth once again! This time the Italian doom band Bretus comes to us to perform their own vision of nightmares which took place (and we know that’s true!) in a godforsaken town somewhere in Massachusetts. Bretus released The Shadow Over Innsmouth album just two weeks ago with the help of Dagon and BloodRock Records.

So if you like good old doom tunes, fish, and seafood delicacies, then this interview with seigniors Ghenes (guitars) and Zagarus (vocals) is for you.

Salute Ghenes! Bretus returns after three years of working in secrecy with a new conceptual album The Shadow Over Innsmouth. How did you spend this period since the previous record In Onirica was released?

Ghenes: Cheers man! We are not hyperactive guys for sure, but we recorded the single “The Haunter of the Dark” for the out-soon 7” split with Black Capricorn (for the label The Arcane Tapes), then we put together the first Doom fest (The Doom Diaries) in our city Catanzaro, and played some live concerts, including the Navajo Calling Fest in Parma, The Malta Doom Fest, and Doom Over Vienna IX. After that we concentrated on writing the new album, which between rehearsals and pre-production has taken us about a year.

Oh… it seems that I’ve missed something! What kind of split did you prepare? How many songs does it include?

Ghenes: The 7” split will be out in the next months for the Transylvanian label The Arcane Tapes. They have already worked with bands like KRÖWNN, Abysmal Grief, Old Witch, etc, etc … We worked with them for the tape version of our album In Onirica. It will be released in 300 copies only. A great honor for us to divide the 7″ with our friends Black Capricorn. One track per side:

Bretus – “The Haunter Of The Dark” 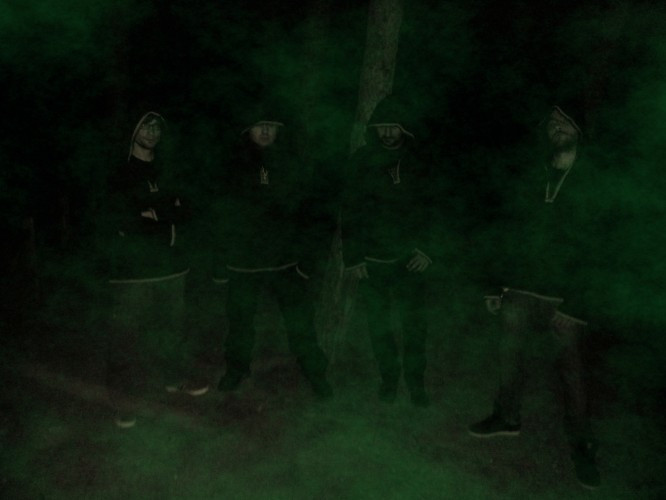 When do The Arcane Tapes plan to publish this record?

Ghenes: There has been some delay for the release, but the label manager assured us that the vinyl is already in print. Get ready!

I’ve never heard about Italian fests like The Doom Diaries and Navajo Calling. Can you tell us about their organization and the bands that played there?

Ghenes: As I already said, The Doom Diaries was our first attempt to organize a little Doom festival in our city. There was not great promotion of the fest, but the response has been very good. We shared the stage with the bands Caronte and our fellow countrymen Unscriptural. Navajo Calling is a two-day festival arranged by members of the band Caronte. For that concert we performed together with Abysmal Grief, the amazing Doomraiser, Distruzione, Midryasyi, Zippo, and many others. Truly a great bill!

Did the recording session for The Shadow Over Innsmouth differ from the way you worked for previous records?

Ghenes: The writing process is always the same. We start from the “riff” and we build all around it. We always try to maintain our characteristics, but we always put in something new. This time we managed to do everything ourselves. Recording, mixing, and mastering were conducted in a calm and homely environment. It was a great experience that has brought us a lot of satisfaction, and certainly made us work hard. Not a deluxe recording, but it works very well eh eh eh…

Did you keep in mind some elements of your previous stuff that you’d like to improve with this new record? What was it?

Ghenes: Improving what has been done on the previous album was not our priority. This album is completely different from the previous, even just because it’s a horror story in music, so we could not repeat In Onirica. It’s always us and our music, but this time there is a logical connection that holds together the music and lyrics.

Zagarus: All our releases are different, though surely there is a common thread because the authors are always Bretus. Honestly, our goal has never been to improve the previous release.

Bretus “The Oath to Dagon”

What is the basis of doom music from your point of view? And how does it incarnate in Bretus?

Ghenes: We think about Doom like a container of different kind of music, including psychedelic rock (’60s psychedelia is better), blues, ’70s hard rock, folk, a bit of heaviness, and so on… in one word: Black Sabbath aha ha ha. Slowness is not a dogma, but playing slow is having the time to develop as well an idea, and give the listener time to enjoy the trip.

Don’t you feel an aspiration to add something unique in this genre? To enrich it with some unique elements which only your band has?

Ghenes: It’s very difficult to add something new at this point, especially talking about a “fundamentalist” genre like Doom. Too many great bands already traced the way. It’s also true that the multitude of musical kinds of genres and moods let you explore theoretically endless solutions. Honestly, it is not a very important thing for us, but I have to say that if one day someone were to say those things about our music, we would be very happy aha aha …

Do you consider Bretus as a solid and complex form of art that includes music, poetry and graphic art (as it is with Mario “The Black” band) or is it only an instrument of self-expression?

Ghenes: The definition of “solid and complex form of art” as applied to what we do is a little too much. We have always loved the bands with costumes or masks on stage, but there was not only that — they also played great music, which is exactly the opposite of what is happening today in the musical scene! Then there is always the wonder in observing a beautiful album cover, and our passion for the vintage horror movies. Different amazing forms of expression that we try humbly to put together. 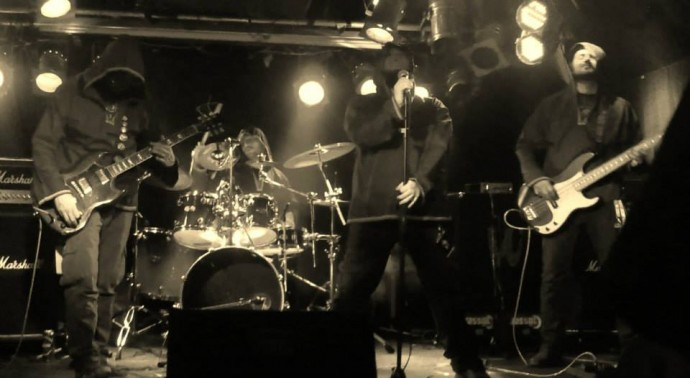 I would like to ask you tell a story of one of new songs. Just choose your favorite one!

Ghenes: If I well understand the question, I could tell you the story of the song “Gilman House”. The novel’s main character realizes, for the first time since he arrived in that strange village (Innsmouth), that his life is in real danger, threatened by its strange inhabitants. He is alone, scared,and  his only way is to escape and run. But where to go? Out of that hotel (Gilman House), he expects other creatures, and God only knows what could happen. Does he manage to escape? Discover the answer by following the whole album story ha aha ha …

What is the last Lovecraftian metal song that you listened to besides your own?

Zagarus: Orange Goblin have included in their latest album (Back From The Abyss) a song called “The Shadow Over Innsmouth”, it is an instrumental song.

What is the best musical incarnation of Lovecraftian atmosphere from your point of view?

Ghenes: Actually I never really thought about it. Not so many bands remind me of the Lovecraftian feeling, but certainly there is no one universal music that perfectly suits Lovecraft’s world. Everyone perceives it in their own way. Many bands have written songs inspired by it, or maybe so called the album’s title. If I think about it a moment, I can say that maybe the music of Neurosis could be a worthy nightmare soundtrack… maybe classical music…

Classical music? Why? Most modern bands see the best way to incarnate Lovecraftian nightmares through retro-doom rock music or funeral doom, or death metal and other extreme genres. Though I remember one avant-garde jazz band Chtulhu Rising…

Ghenes: Maybe it’s the word “modern” that scares me ah ah aha. Seriously, there are awesome bands out there and great music too, but If I think about the stories of Lovecraft, I think of a universe so vast and original that, in my personal opinion, only classical music with its power and its complexity could support it worthily. 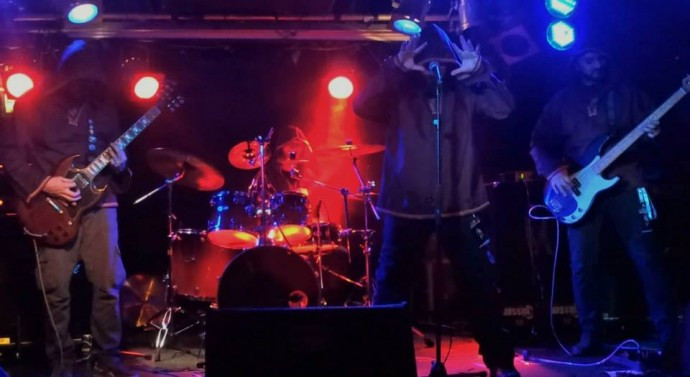 And on which specific aspects of the Innsmouth story did you focus during the album recording session?

Ghenes: We took the whole story of the “Providence’s loner” and we have made of it a record. We gave great importance to all aspects of the whole story, as it deserved. I can speak for myself, but I read all the stories of Lovecraft since I was a teenager, and now I am not still a teenager sadly, eh he…  Some may think that we took advantage of his name (rather a risk, as I think), but the reality is that I wanted to realize it for a long time. We did so either well or poorly, but it is a sincere tribute to his art.

And what was your favorite book when you went to school?

Ghenes: Obviously “The Shadow Over Innsmouth”!

Bretus belongs to the Catanzaro region, it’s a “city of two seas”, part of it built on the ruins of a most ancient city Trischines. Did the historical and cultural traditions of this land leave some trace on your new songs?

Ghenes: Fortunately we live in a beautiful land. In Calabria there succeeded Greeks, Arabs, Byzantines, Normans, Spanish, and many more, and visiting it you can see the different combinations of cultures. As for the nature, you pass through beautiful mountains to our seas, and no doubt, living in the midst of all these colors has undoubtedly inspired and encouraged us to achieve something good. We shot the video of the song “The Oath of Dagon” in a charming and mysterious medieval village called Badolato situated on one of our heights. Like all the places in the world, we have our problems too, but sometimes problems push you to do even more and with more conviction.

Okay, thank you comrades for this interview, it was really nice to discover some details of Bretus’ artistic way. Good luck and all the best! Let me know when you have some news!

Ghenes: Thank you very much for the support and all the best for you and your job too! See you soon! IN DOOM)))

Zagarus: Thanks man! DOOM ON!

One Response to “AN NCS INTERVIEW: BRETUS”