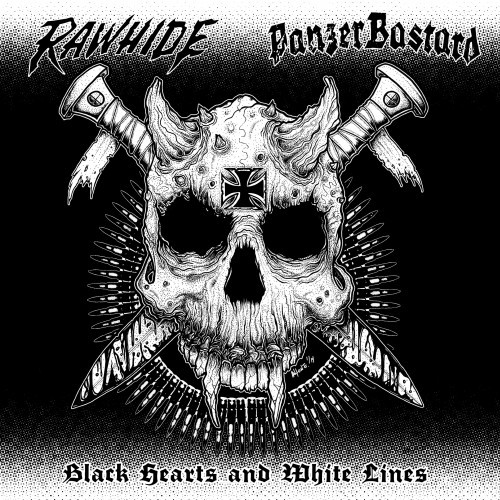 PanzerBastard have been cranking out demos, splits, and EPs since 2006, and this new release includes three more explosive blasts of mayhem. The track I picked for this premiere is “The Grand Bargain”. It’s a jolting rampage of punk-fueled metal that shifts into a lower gear before it’s over, hitting a groove that’s guaranteed to get heads moving while hosing you down with a bit of napalm shred at the same time. Hot shit.

The last time I wrote about Rawhide was in October 2013 — which is way too long ago — and I penned these immortal words about a song from their album Murder One:

Okay, probably not immortal words, but at least evocative of how I felt about this band’s music. And I feel basically the same way about the song I picked from Rawhide’s two track son this split. “Backstabber” is a combo of catchy punk riffs, cool soloing, vicious vocal excretions, and a bad fuckin’ attitude.

Black Hearts and White Lines will be released on May 22, 2015. Pre-orders are available HERE (Unholy Anarchy) and HERE (Anvileater), and you do get a digital download of the album along with the wax. More info is available via these links:

2 Responses to “AN NCS PREMIERE: PANZERBASTARD AND RAWHIDE — SONGS FROM “BLACK HEARTS AND WHITE LINES””