The first song in this collection is named “Askebundet” by a Norwegian band named Svartelder. I listened to it because of an e-mail which explained that the current line-up of the band includes members of Carpathian Forest, In the Woods, Den Saakaldte, Pantheon I, and Old Forest, in addition to founder and frontman Doedsadmiral. The e-mail didn’t disclose which particular individuals from those bands are now part of Svartelder — they’ve taken new names for this purpose: Maletoth (bass, guitars), AK-47 (drums), Kobold (keyboards). But those band names were enough inducement to check out “Askebundet” — and it turns out to be fantastic.

The reverberating guitar notes, warm bass tones, and slow, perfect drum rhythms at the beginning of the song immediately set the hook. The band set the hook even more firmly when the double-bass rumble begins, the guitars begin to scratch and claw, and Doedsadmiral begins to shriek. The song is wonderfully varied and dynamic, moving back and forth between rocking, compulsively headbangable rhythms and more meditative passages. The keyboard notes that emerge, as spare and simple as they are, become magnetic, and there are some delicious riffs in this song as well as moving waves of melodic tremolo guitar melody.

The overall aura of the music is sombre, melancholy, and even hallucinatory, and it’s also very infectious. This is a long song whose length is completely justified, and a very intriguing teaser for more music from this band.

I’m embedding the song via two different players, right below this link to the band’s Facebook page — which you should go like if you’re a Facebook denizen. 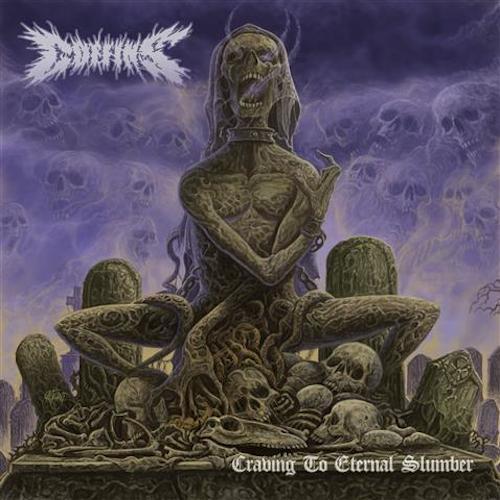 I was a fan of Coffins before seeing them perform at Maryland Deathfest last year, but after watching them perform at Ram’s Head I became a rabid fan, complete with foaming at the mouth. In my humble opinion it was one of the highlights of the whole festival.

And so I was very excited to see this announcement from Hammerheart Records this morning:

Japanese death metal outfit Coffins will release their new mini-album Craving To Eternal Slumber on Hammerheart Records! This album will be released on CD, LP (with bonustracks) and digital this summer.

And on top of that thrilling news Hammerheart linked to the first new song from the EP, a track called “Stairway To Torment”, which you can check out below. This is a bestial blast of thoroughly transfixing freight-train riffs shrouded in high distortion. It moves from a steamrolling assault into a dirge-like lurch — and then, with a napalm-spewing guitar solo, it explodes into one last barrage of viciousness. The varied drumwork in this song is yet another reason to hear it. The vocals, of course, are gruesomely guttural. 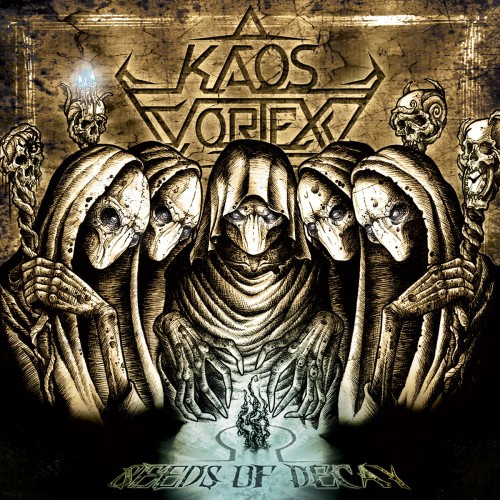 Kaos Vortex are a German band who hit my radar screen when I learned in 2013 that Fredrik Huldtgren from Sweden’s wonderful Canopy had become their new frontman. The band have recorded a debut album named Seeds of Decay that’s set for a May 22 release on CD and digitally by Bret Hard Records, and yesterday a single from the album named “Terrorizer” became available for streaming and download on Bandcamp, where the album is also available for pre-order.

“Terrorizer” is a ticket straight to headbang city, a brutish mid-paced chugfest that gathers steam as it charges ahead, with interludes of thoroughly morbid melody and demented guitar shrieking and swarming. And to top off this massive (and massively infectious) groove-delivery mechanism, Fredrik Huldtgren’s deep growls are convincingly barbarous. Want more!