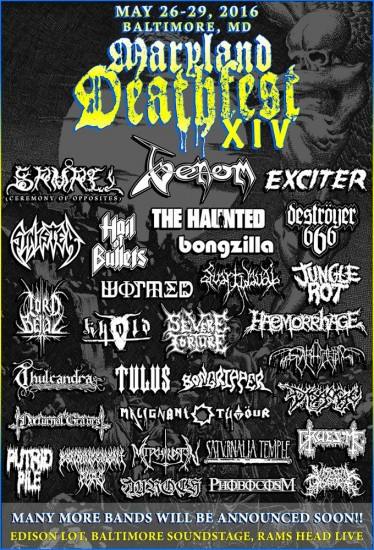 Yesterday the organizers of Maryland Deathfest announced the first group of bands for the 2016 edition of North America’s best metal festival. They also released 350 “early bird” passes for on-line sale — which sold out in approximately 15 seconds. Your humble editor wasn’t quick enough on the draw to get one of those. But more tickets will be released for sale after MDF finishes announcing the bands for next year’s event. For now, let’s talk about the first group of 30 bands revealed yesterday.

There’s a lot to talk about.

About three weeks ago, NCS contributor KevinP rolled out his own wishlist for MDF XIV (here), and that led lots of readers to roll out their own lists in the Comments. There were tons of good bands in those lists, and many people got at least some of their wishes granted yesterday. KevinP, for example, is a happy camper because his Number One pick — Hail of Bullets — were included in yesterday’s announcement. On the other hand, none of the rest of his wishlist of 10 bands was included. But of course there’s still time.

Following on the heels of this year’s complete performance of a classic album from front to back (Amorphis performing Tales From the Thousand Lakes), next year will see Samuel performing their 1994 album Ceremony of Opposites, an album that many would identify as marking the beginning of the band’s divergence from the second-wave pack of Scandinavian black metal.

There’s a tip of the hat to first wave black metal, too, as Venom are making another MDF appearance — somewhat surprisingly, as they appeared at MDF not long ago (in 2013). Their live performances these days seem to produce more cat-calls in reviews than standing ovations, but they’re on my bucket list of bands to see, so I’m glad I’ll get the chance. I mean, shit, it’s Venom, right?

I didn’t see The Haunted coming, but it makes a lot of sense, given the festival’s expansion in recent years into the realms of melodic death metal. The Haunted have never appeared at MDF before, and I bet the band’s current line-up is going to tear shit up on stage.

You’ve also got a tip of the hat to old school Dutch death metal with an appearance by Sinister, which reminds me that I haven’t heard their 2015 album Dark Memorials, which was released yesterday. Anyone out there heard it? And speaking of old school, those venerable Canadian speed-metal freaks in Exciter are on the bill, too.

Bong metal is well represented, with Bongripper and Bongzilla. Not exactly MDF meat-and-potatoes, but I’m not complaining. What gets me a lot more excited, however, are names like Haemorrhage and Wormed from Spain, Nocturnal Graves and Denouncement Pyre from Australia, and Mitochondrion, Phobocosm, and Auroch from Canada — first-time appearances by those last five bands.

I’ll mention a couple of other names that have got me very excited for next year’s fest, and then I’ll shut up and invite you to share your own thoughts. First, Iceland’s Svartidauði. Just two days ago I added one of their songs to our delayed roll-out of the list of 2014’s Most Infectious Extreme Metal Songs (here), and to see them on the initial MDF list yesterday was a very welcome coincidence.

And second, Germany’s Thulcandra. Among the best current practitioners of Dissection worship, they’re a band I’ve admired from afar since their first release. The chance to see them live is something I’m really looking forward to.

Okay, now I’ll shut up. Here’s the complete list of the 30 bands announced yesterday, followed by an announcement last night by MDF from their Facebook page about tickets. After that, please feel free to share your thoughts in the Comments about this initial line-up.

When will you announce more bands?
No exact date for this. Maybe as early as 1 or 2 weeks from now.
Is MDF sold out?
NO. We released 350 early bird passes and they sold out in approximately 15 seconds.
When will tickets go on sale again?
ALL ticket options will go on sale after we finish announcing bands. This includes more 4-day passes. We’ll keep you posted on an exact date.