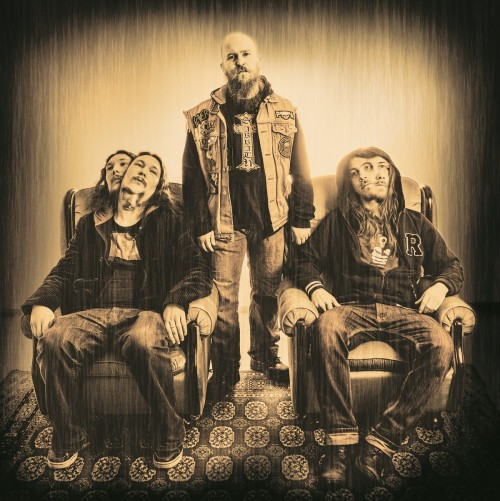 (Our Russian friend Comrade Aleks has been a busy man, and we’ve got a string of new interviews from him that we’re posting from now to the end of this week — beginning with this conversation with Finland’s Pohjoinen.)

Pohjoinen means “North”, but this Finnish band doesn’t play black or death metal, as they follow the path of authentic doom. Pohjoinen are Kimmo (bass, vocals), R (drums), and Tumppi (guitars, vocals); this power-trio chooses an old school approach, preferring a groovy and heavy sound with melodic vocals and Finnish lyrics. I like bands who keep their national identity, so I was really glad to find Pohjoinen, and this telepathic interview with the band’s collective mind is a result of this discovery.

Hail mates! How are you there? First, Pohjoinen’s self-titled LP was released two months ago. How did you come to it? What was your road to this record?

Hail you, hail to all! We have been together for 2 years with this line-up, and the record has been slowly manifesting itself through that time. Our bass player Kimmo recorded it at our rehearsal place in the spring of last year, and he also did the mixing/mastering. Some songs were older than that — from a previous incarnation of the band.

“Pohjoinen” means “North” in Finnish, and it’s a good name for a black or death metal band. What did you put in this name?

When this band started we had trouble finding the name, then one evening as we were having some beers one of our friends said “How about Pohjoinen?”, and it clicked right away. Of course Finland is a northern country, but more so it’s about “a mental-north”.

And how does it reflect in your songs? All lyrics are written in Finnish, so I would like to ask you what do you sing about?

Death. Well of course we have more diversity than that, but it is a big subject. Your own mortality and knowing the fact that one day you are going to die, and all that those things include. 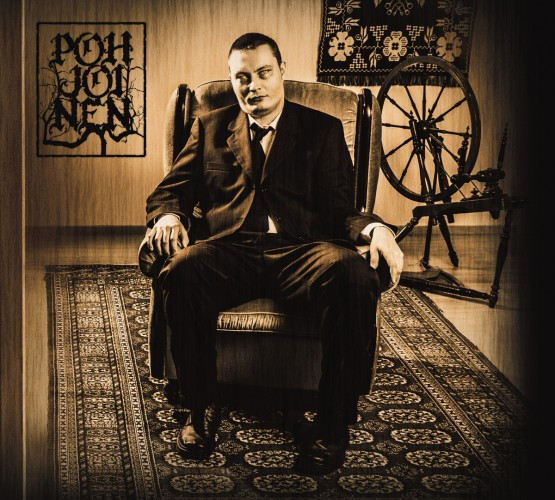 The album’s art-work looks a bit disturbing and indeed expressive. What’s the story behind it? Where was this photo made?

The first inspiration came from the old post-mortem photographs, which were taken after the person had passed away. Mainly because photos were so expensive and they didn’t have any before the person had died. Our bass player was just moving by the time we had to take those pictures, so we had a nice empty apartment to light up and take all the pictures. Our drummer, R took all those pictures.

What did you do to make Inverse Records believe in you and to release the Pohjoinen album?

We really don’t know. When we put our first track from those 9 we recorded (“RJD”) to Soundcloud, after about 6 hours or so they contacted us and asked what our plans were about the record. And what’s even funnier, that was the label we were thinking of in the first place, so it all worked quite nicely

I’ve seen two live videos of Pohjoinen on YouTube; please tell us about the “live” side of Pohjoinen’s activity.

Tumppi: I can say about myself that I try to give my all at every show, and I’m sure the others will also. I have one bad habit, I mostly sing with my eyes closed, so I try to look at everyone in the audience at least once, and give a bit more attention to those who really seem to dig it. You know, I try to give the audience the kind of things I really enjoy myself when I am in the audience. I have lots to do when we are live — to sing, to play, to press my effect pedals — and on top of that, I also have to perform, so it’s a lot. But I try my best, and I try to try more than my best. 🙂

Your music mainly consists of heavy distorted riffs and really attractive psychedelic atmosphere. Did Finland have such a proto doom scene in its past? Personally, I only know the Lyijykomppania band… and it’s hard to say if they’re really old, as their first record was released only in 1991.

I think we have one important band in the past, which is Reverend Bizarre, but I don’t think that any band has really affected us. It’s all these things in general: metal, blues, guitars, distortions, slow rhythms, etc. Of course there is something common with us three, but also there is lots of diversity.

I think right now, we have more of these kinds of bands in Finland than ever before and we just happened to happen at the same time, or then it was just the collective unconscious calling.

We never paid too much attention to the scene before.

What attracts you to such kind of music in general? Sound, atmosphere, conception, or something else?

Tumppi: The slow, simple, but groovy riffs; the dark, but not sinister, atmosphere; guitars, guitars, and once again, heavy down-tuned guitars.

Kimmo: Nothing. I really come from another place. I like playing this music but have no need to listen it in my spare time.

R: I like blues and the roots vibe this kind of music still has. I like Deep Purple, Sabbath, and all the old bands, that’s where I found it. And heavy pounding drums.

Do some stimulants play any part in Pohjoinen’s activity? You know, it’s a kind of stereotype for a lot of doom bands as bong, weed, and smoke. It became a sort of cliché for many of them.

Well, it’s not strange to us, but it’s not a part of our music. We are all about the music, not getting fucked up instead of rehearsing.

Considering your album… Do you feel that you give something new to the genre?

Yes and no. We have our roots deep in this kind of music, that’s true, but then, we have pretty basic song structures, guitar solos, and clean vocals and, at least we feel so, we mix a lot of genres, we do our own stuff. If you look at it from a broader perspective, there is something new to the Finnish metal music in our stuff. And the fact that our lyrics are in Finnish, that’s pretty rare in this kind of music.

Here comes the first standard question — what was your favorite book in the school?

Kimmo: Once I HAD to read a book and I got just some book from the shelf. It was by some dude named Higgins, don’t remember the first name, nor the name of the book. It was a story about the Second World War. I thought it was good, but what do I know. I can say my least favorite was anything in Swedish.

And the second one — please tell us the story of some song from the Pohjoinen album.

Tumppi: Well, the first song, “RJD”, I thought the name would be stupid and everyone would get it, but it seem that no one does. “RJD” of course means “Ronnie James Dio”. The inspiration for the lyrics came from his death and his legacy, but there is more to that song, it’s also about your life choices and how you have to live with them, for better or worse.

What’re your plans for Pohjoinen’s future?

We are finishing and demoing the next 6 songs for our future release and we have just finished our promo video (which we also made ourselves, more so by our drummer, R), for the current album. Hopefully we will do a shitload of gigs in the near future. And this cycle will continue as long as we live, or as long we feel like it.

What is the new stuff like, conceptually and musically? Is it similar to the Pohjoinen album?

I think the new stuff is more of “us”. There are some things that are slower, some that are faster, some that are more psychedelic, some more classic rock. So, it is still Pohjoinen, but its more, more deeply Pohjoinen.

Conceptually we are on the same path, but I think maybe deeper there also. There is some Santa Muerte, Crowley, and also basic everyday life influences. Death is still with us. 😛

Okay, men, that’s all for today. Thank you for this interview, and let’s hope that a few more metalheads turn toward Finnish North after reading this text. Good luck! Would you like to say something else?

Firstly, we must thank you for this interview, and for all the people reading, go to…

…to listen the album, and if you want a physical copy, I think you can get it here:

3 Responses to “AN NCS INTERVIEW: POHJOINEN”