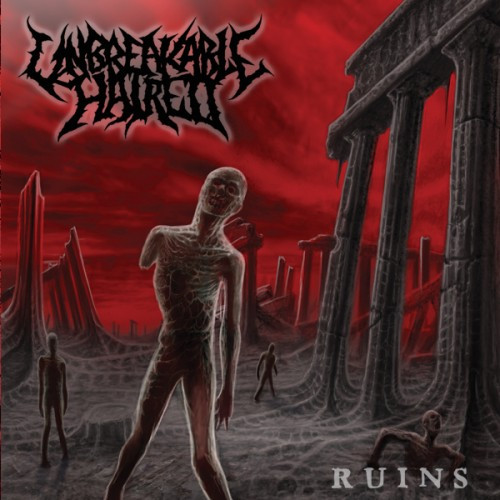 Unique Leader Records has a well-demonstrated taste for bands who join death metal ferocity to head-spinning complexity and technical flair, and this past spring they added another eye-opening group to their growing roster — Unbreakable Hatred from Quebec City. The band’s second album Ruins is now projected for release in August, and we’re about to give you a glimpse of the carnage within as we premiere the album’s title track.

Unbreakable Hatred is a power trio consisting of guitarist Philippe Drouin, his brother Dominic on drums, and vocalist/bassist Simon B. Lapointe. The band’s debut album Total Chaos was released in 2011, and they’ve drawn praise from an impressive collection of other musicians:

“Unbreakable Hatred is one of Canada’s premier death metal acts; this trio of power lays waste to the listeners’ ear drums on every level and then some!” – Terrance Hobbs, Suffocation

“Unbreakable Hatred blew us away each night with their energy and ripping songs; it was a total pleasure to have them on our tour and the best is most certainly to come – Ferocious!” — Jason Netherton, Misery Index

“Unbreakable Hatred from Quebec are definitly one of the new bands out there to be recognized! Once again proving that Quebec musicians are on top of their Game! ” — Flo Mounier, Cryptopsy 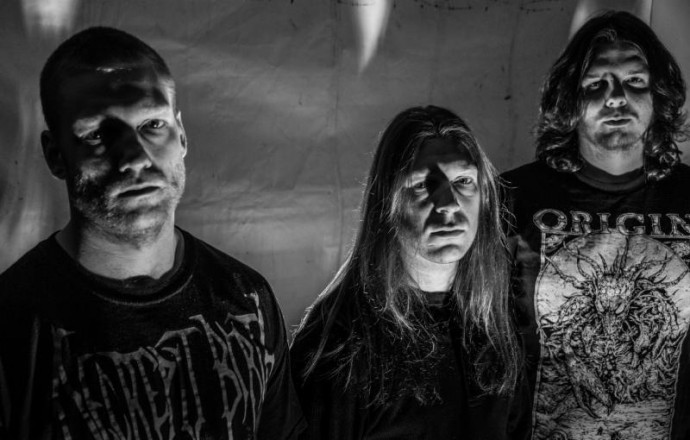 When you listen to our premiere of “Ruins”, you’ll understand the reason for these compliments. It wastes no time putting your brain into a centrifuge and whipping it around at high speed, while sending the device soaring and diving like a hawk at the same time. The fretwork and drumming are fast and furious, yet all the abundant instrumental athleticism is harnessed within a song structure that’s anchored by punishing grooves that pull you solidly back to earth (and drive you straight down into it, too) just when you think the music is going to fly off into space. And the howling vocals are just as crazed and vicious as the relentless instrumental decimation.

No doubt, this band lives in the red zone — but they know how to put rhythmic and melodic hooks into their turbocharged music, to give you something to remember and come back to, in addition to the full-on adrenaline rush you get in the immediacy of listening. Unbreakable Hatred makes a fine addition to an already impressive Unique Leader roster.

Ruins features cover art by Jon Zig and is scheduled for release on August 21, 2015. Pre-order here: